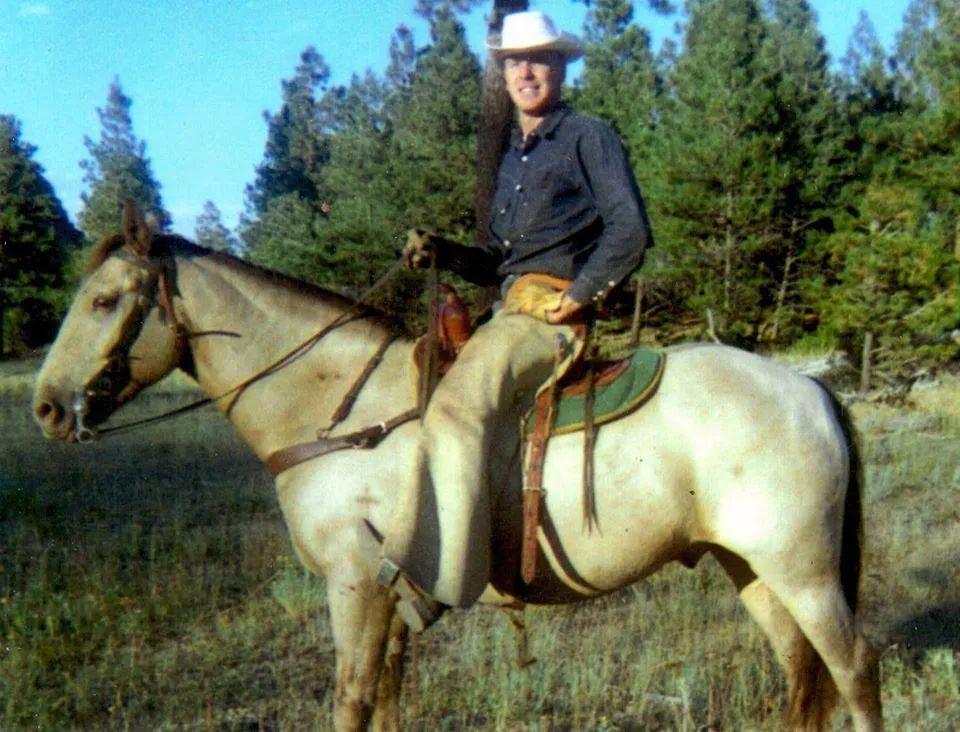 The late Wes Synness, a fourth generation Montanan, was a Man’s Man, and a Cowboy’s Cowboy.

“Wes Synness lived by the cowboy code,” related his longtime friend, Kitty Ann Quigley Taaler, “hard work, loyalty, honesty, generosity. He’d loan you his horse, even when it was him that deserved to ride.”

Along with his five siblings, Wes was raised on a ranch in the Helena Valley. Each year the children would help their Dad herd about 50-60 head of cattle from the Lake Helena Drive Ranch to the Synness’ 900 acre Beartooth Ranch in the spring, then gather and move them back again in the fall. It was a two-day trip so on the first night they would camp near a local spring on the North Hills.

Wes spent his early years watching his Dad break and shoe horses at the Beartooth. In his late twenties, he became the owner of a stout and powerful, buckskin horse named Bucky-Boy. Wes broke the horse bonding their relationship that lasted more than twenty years. During that time Bucky-Boy was his trusted companion that took him on his annual hunting trips across the state from Indian Meadows near Lincoln to Hell Roaring by Yellowstone Park.

At 6’2” and 195-pounds of sinewy muscle, Wes was an all-around sportsman. But the countless hunting trips with his innumerable friends and the tall tales that went with them, were his number one passion. On one of those memorable hunting trips, at age 65, he was thrown from his horse, climbed back in the saddle and continued hunting for the rest of the day, discovering later he had broken his arm.

When he was 67 years of age, Wes trained a new horse. It was a Roman-nosed Palomino, half Tennessee Walker and half Arabian, that his granddaughter had named Apollo’s Gold. The horse bucked him off when he was breaking him and stomped on his head. As a result of that incident Wes’ hair fell out by handfuls and never grew back again, thus he appropriately called the horse Scalper from then on.

Wes told the story that every cowboy has been upside down on a horse at least once but not many have been that way at the top of a cliff when they were 69.

“A couple of years ago we were riding high on the side of the Sleeping Giant,” he related in 2002. “We were on the steep slate slide, 800 feet to the bottom – my horse Scalper bucked me off and I got hung up in the stirrup. That is a very lonesome feeling hanging upside down off the side of a bronc.

“I still had a hold of one reign. My son-in-law, Bill Bossler, ran over and pulled my foot out of the stirrup just as the horse crashed end-over-end down the slide.” When asked is Scalper was hurt during the tumble down the mountain, Wes replied “Nope, he’s too tough to get hurt.” Like horse, like cowboy.

All cowboys love rodeos, and Wes was no different. His favorite was the Last Chance Stampede, at which he served as an LCS parade marshal for many years, including one term as Grand Marshal. Parade Marshals accompanied the many horsemen entered in the parade and were also on duty at the fairgrounds during the rodeo, keeping the crowd safe during the bull riding event.

He took part in the inaugural Chief Joseph Trail Ride in 1965, riding an Appaloosa horse the first 100 miles from the starting point at Wallowa Lake, Oregon. The ride occurs annually, retracing the 1,300 mile path of the Nez Perce Indians to northcentral Montana, in their effort to escape the U.S. Cavalry in 1877.

In 1989, he rode in The Montana Great Centennial Cattle Drive, helping herd 2800 cattle from Roundup to Billings.

Wes and his son Trent participated in a reenactment of Custer’s Last Stand in 1990, before the name was changed to the Battle of the Little Bighorn, near Hardin, as soldiers with the 7th Cavalry. They used a couple of geldings from the Beartooth herd as their mounts during the event.

Wes served in the Montana Army National Guard From 1949-57. In 1956, he purchased his own business, and operated Synness Auto Wrecking for the next six decades, working 6 days a week well into his 70s. He also kept a small corral in a corner of the junkyard, for “breaking” colts.

Wes and Carol (Lynch) Synness were married on October 6, 1951. They became the parents of five sons, Curt, Trent, Greg, Jay, and Wayne and one daughter, Brenda. They had nine grandchildren and 12 great grandchildren.

There are only a few real cowboys left in this world, and Wes was ranked among them. He moved on to join the wranglers in that roundup-in-the-sky on May 12, 2020.

“Live, love, laugh. These words were Wes Synness to the core, and more; he did not miss a beat in living life to the fullest and brightest,” Kitty Ann wrote. “Wes left this earth with his Norwegian name in good stead.”