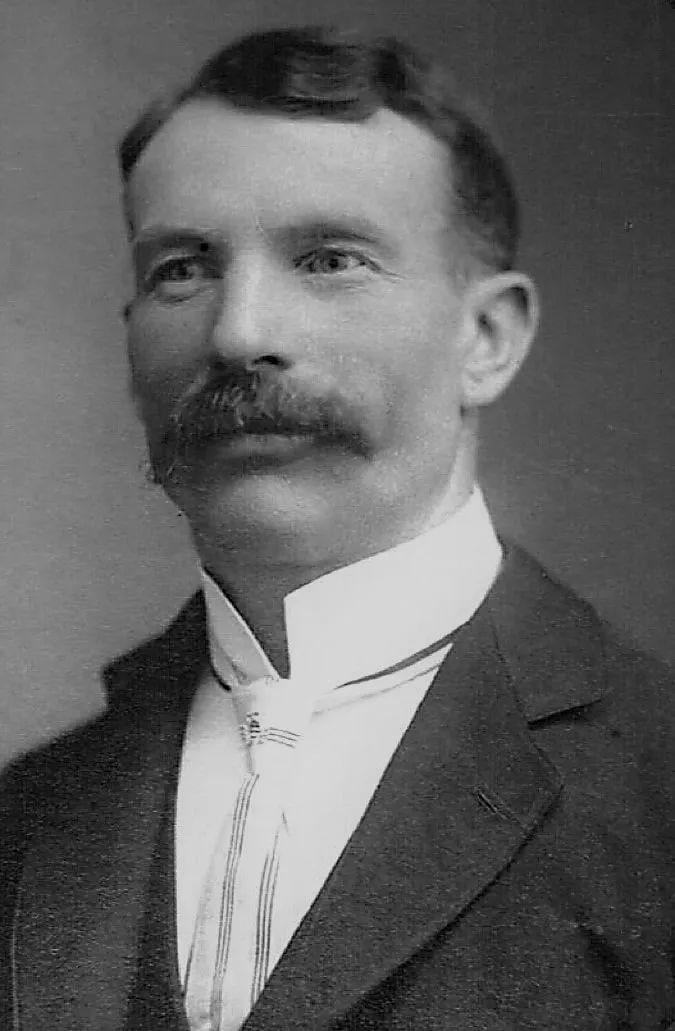 June of 1866 found seven-year-old Robert Stuart Brownlee, parents Alexander and Mary (Stoddart) Brownlee, and Robert’s seven siblings gathering their meager belongings as the passenger ship “The City of Paris” entered New York Harbor. This was the end of the family’s voyage from Robert’s birthplace of Greenlaw, Scotland. The family settled in Barrie, Canada where Robert honed the trades of his father and Scottish grandfathers - blacksmithing and carriage building. In 1886, at age 27, Robert immigrated to Montana and began a working interest in a sheep ranch east of the Snowy Mountains near Roundup, Montana with his brother-in-law J. B. Elliott. After four years, Robert purchased the blacksmith shop in Melville, Montana nestled near the Crazy Mountains some 30 miles north of Big Timber, Montana.

In 1895, Robert and partner George Taylor purchased a ranch in the Big Coulee country, south of Ryegate, Montana. An 1898 newspaper article noted, “Messrs. (Mr.’s) Brownlee and Taylor are both very popular with “the boys” all over the county.” 1900 saw Robert sell the blacksmith shop to devote his time to the ranch until 1903 when he sold out his band of sheep and rented the ranch. That fall he took 25,000 head of sheep to Schuyler, Nebraska, where he fed and marketed them during the winter. It was written that, “…. they devoured one thousand tons of hay and the contents of two elevators of corn for their winter's keep.”

The turn of the century also saw Robert’s entry into Sweet Grass County politics where for nearly 30 years he served as the County’s Representative and Senator. An August 1900 newspaper stated, “Robert Brownlee, candidate for Representative, is one of the most popular men in the northern part of the County and enjoys the respect and esteem of all who know him. He has never aspired to public office though he takes a lively interest in County politics. In his business dealings, he is conservative and a man whose word is as good as his bond.”

Among his many political achievements was, “…. a mass meeting of citizens (called by Rep. Brownlee) was held at the courthouse last Sunday afternoon to discuss and take action against the change in the Park and Sweet Grass County lines.” (Park County attempted to shift the southern boundary nearly 20 miles east to follow the East Boulder watershed during the 1901 State Legislature.) A later 1906 publication noted, “How well he has proven the possibilities of Montana for men of industry is evidenced by the fact that besides his home ranch of one hundred sixty acres, which he recently bought for six thousand dollars, he owns twenty-three hundred acres on Big Coulee, besides city real estate and buildings in Big Timber (and Billings, Montana). Republican in politics, active and energetic, courteous and progressive, with a keen sense of right and an equally keen sense of humor, unspoiled by success and broadened rather than made narrow by the confidence reposed in him by the people….”

Among his varied financial ventures was his purchase of the “The Old Stone Barn” livery as detailed in a Pioneer 1905 story. “Last week Hon. Robert Brownlee purchased the property known as the Stone Barn…. The deal includes livestock, rigs, etc. Mr. Brownlee is one of the best known and popular young men in the county and an experienced horseman.” The “Stone Barn” years later became the Oie Motor Company building surviving yet today in Big Timber.

A man of action, Senator Brownlee was one of several prominent ranchers on April 30, 1908 indicted by a Federal Grand Jury for “fencing the Public Domain.” He subsequently pled guilty, following a week’s attendance at the Montana State Fair in Helena, Montana, where Judge Hunt sentenced him with a fine of $500 and 12 hours to serve in the Lewis and Clark County jail.

He was known too for his life-long strength in building relationships. Son-in-law Lloyd Braughton once told his son, Dean, “I’ve never known a finer man in my life. Bedridden for three years after his stroke, he never complained once and always had a big smile on his face whenever someone stopped by to visit.” A broader perspective was demonstrated in a 1925 Helena newspaper article, “He understands the workings of both bodies (House and Senate) as a jeweler understands the mechanisms of a watch.” The article went on to describe the depth and breadth of his interests. “Senator Brownlee is interested in measures pertaining to agriculture, stock raising and grazing…. but equally interested in roads and highways, fish and game laws, banking measures, mining and oil development….and election laws.”

Robert Stuart Brownlee: Scottish immigrant; family man; public servant; blacksmith, businessman; and Montana cowboy dismounted from his final ride on Easter Sunday morning April 9, 1939. A “Who’s Who” of 40 Sweet Grass County friends and neighbors served as actual and honorary pallbearers prior to internment at Mountain View Cemetery in Big Timber, Montana. His was a life well lived, as in the words of his favorite Scottish Poet, Robert Burns: “An honest man here lies at rest, As e’er God with His image blest: The friend of man, the friend of truth; The friend of age, and guide of youth; Few hearts like his, with virtue warm’d, Few heads with knowledge so inform’d: If there’s another world, he lives in bliss; If there is none, he made the best of this.