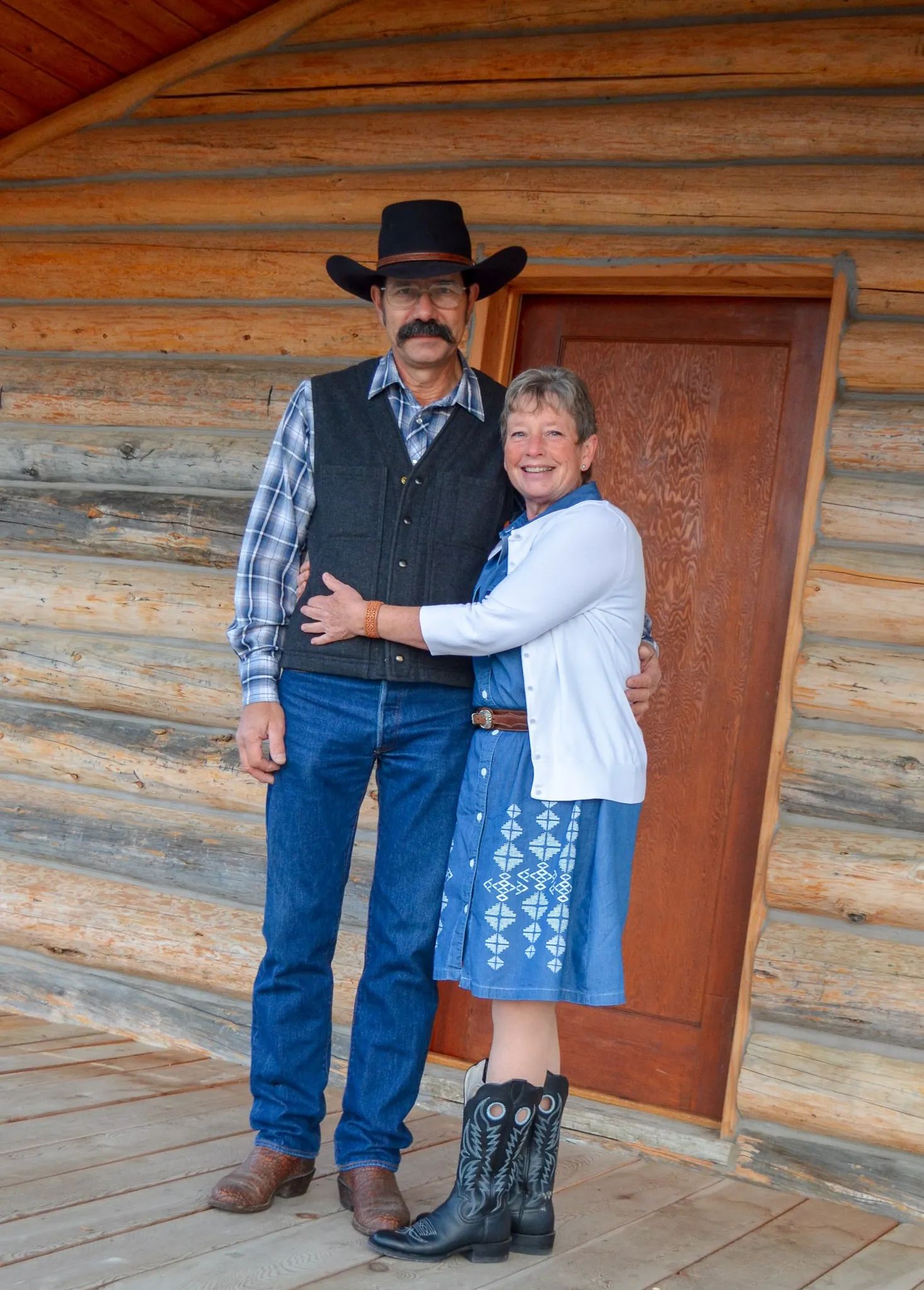 Wes Schenk was born on May 18, 1956, to Mike and Ann Schenk in Forsyth, Montana. The Schenk family was ranching in Petroleum County, east of Winnett at the time. Tammy Jones was born in Roundup, Montana to parents Bud and Ruby Jones, on September 26, 1959. Bud worked as the ranch manager for the Nebraska Feeding Company in Petroleum County. When Wes graduated high school, he went to work at the same feeding company. After a horse wreck, Wes was nursed back to health by the boss’s daughter, Tammy, helping with his care and physical therapy. They later married in 1978, and Wes started working as a ranch hand at the Castle Mountain Ranch near White Sulphur Springs, Montana. Over the next several years, the couple worked ranch jobs in the area and spent a winter trapping beaver, fox, coyote, and bobcat. In his Winnett High School shop class, Wes had learned to do leatherwork and tooling. He started making bridles, spur straps, and breast collars for the pure pleasure of it, thus triggering the beginning of a new direction in their life together.

In 1980, Wes and Tammy rented a store on Main Street in Harlowton and began a boot and shoe repair shop. Finances were tight; therefore, Wes did night calving for area ranchers to help pay the bills. Tammy would run the shop in the morning while Wes slept, then he would work in the shop from noon to six in the evening. Wes felt that he was pretty much self-taught when he started out on this craftmanship venture. When Wes brought home the leather sewing machine, Tammy instructed him on how to thread it. After that, she says, “his sewing skills surpassed hers”. What Wes learned when he first started repairing saddles was of great value when he made the commitment to begin building his own. That experience allowed him to develop a sense of what worked and what didn’t for the horse as well as the rider. Wes says his artistry has been a lifelong journey, “I will never be done learning or completely satisfied. There is always something I could do a little better”. The designs on his Schenk saddles are created free hand by Wes and take quite some time to complete. Thinking back, he crafted his first saddle in 1985, and with a smile, comments that he has been behind on orders ever since. At one ranch roping, it became apparent how popular Wes’s saddles are with the cowboys and cowgirls. Out of around 35 contestants, 23 of them were riding saddles made at the Schenk’s Saddlery. Over the last 36 years, Wes has built 350 saddles. They are not only being ridden in every state in the union, but also in Canada, Germany, France and Italy. The Schenks believe in serving the needs of their customers, which can comprise of reattaching little ol’ ladies purse straps at no charge, to antique restoration on saddles and collector’s headstalls. In 2003, they left the Main Street location and built a shop next to their home on the outskirts of Harlowton. Walking into their shop is like being in a museum, with old tack, photos, and antique fixtures displayed around the building. Business has always come to their door by word of mouth, and to this day they have not needed to advertise.

Behind the scenes, Wes proudly says “Tammy is the Nancy Russell of the bunch”. He credits her as the reason the saddlery is successful. Besides doing the books Tammy does the online shopping for supplies, since Wes would rather look for wood to send smoke signals than deal with a computer or a cell phone. Tammy takes care of the technology aspect of the business as well. Besides partnering in the saddlery, Tammy has enjoyed working in the Harlowton Public School System for 35 years. For the last twenty of those years, she had been working at the Duncan Ranch Colony west of town. After years of baking special order cakes Tammy earned the title of “The Cake Lady” around the Harlowton community.

From 1991 through 2001, Wes and Tammy donated a saddle to the Northern Rodeo Association Finals for the Champion Bull Rider. Wes’ custom-made saddles and gear were showcased from 1988 - 1990 at the Montana Cowboy Poetry Gathering and Western Music Rendezvous held at the time in Big Timber, Montana. He was invited to display additional work in 1990 and 1991, at the “Saddle Makers Booth” at the Nile in Billings, Montana. In 1992 - 1996, his work was chosen to be displayed at a juried art show called, “Trappings of the American West”, sponsored by the Coconino Center for the Arts, in Flagstaff, Arizona. While at the 1992 Trappings show, Wes’s saddle was chosen to tour Malaysia for six weeks in a Western art exchange funded by the Arizona Commission on the Arts. He displayed his work in Watsonville, California during a show called, “Art of the West” presented by the Pajaro Valley Arts Council. In another Flagstaff show called, “Beyond the 98th Meridian-Images of the American West” sponsored by the Dry Creek Arts Fellowship, Wes sold and displayed his work to cowboys and collectors across the United States.

“My only goal when we opened the shop,” says Wes, “was to turn out top quality work at an affordable price, and that is still my goal today. Having grown up on ranch hand wages myself, I know what it is like to spend three months’ pay for a custom-made saddle. Every customer is important to me, whether it be a broken old purse handle, a pair of muddy boots that need some new soles, or a carved full-flower custom saddle order”. In 2005, Wes took a silver smithing class in Colorado with his son, Clay, who has a business building custom rifles. Wes now adds silver engraved detail such as conchos and plates to his leatherwork.

Wes has been a lifelong admirer of Montana artist, writer and cowboy Will James, even naming their first son, Will. Recently, Wes has begun work on what he calls his Will James Saddle. Every single one of the major pieces of the saddle will have Wes’ interpretation of a scene from a Will James drawing. First and foremost a cowboy, Wes thoroughly enjoys helping out his rancher friends on weekends. When an area Montana rancher lost two Schenk saddles, from an out-of-control prairie fire that burned down his barn, Wes showed up to help gather, sort cattle and build fences. When he returned a month later, Wes had a brand-new replacement saddle and three pairs of chaps for his friend and members of the family.

Over the years Wes and Tammy have enjoyed spending time hunting, camping and cowboying with their two sons, Will and Clay. The addition of grandchildren added a new dimension to their lives. After harvesting the logs, themselves, the Schenk’s built a log cabin on their property up the hill from their house. They now spend evenings and weekends at the cabin with their sons’ families enjoying time around the firepit, doing puzzles and throwing horseshoes. The simple things in life have always made for the best of memories for this down-to-earth Montana couple.