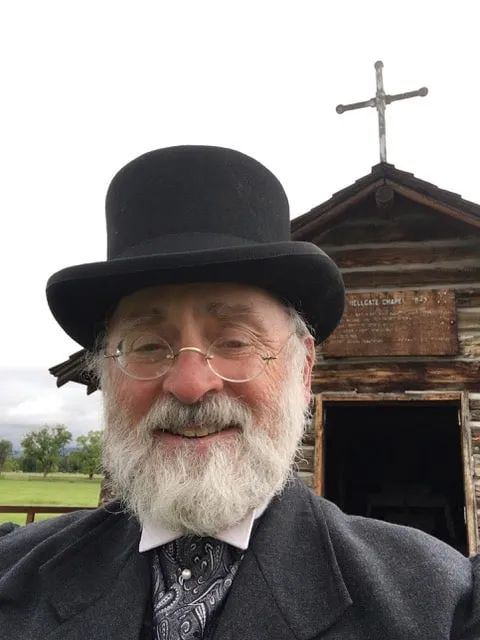 Robert Brown, or “Dr. Bob” as he is known to most, was born in New Jersey on March 4, 1952. The only hint of his ever becoming a Westerner was that he was born in western New Jersey. He grew up in Collegeville, Pennsylvania, just outside of Philadelphia. Bob graduated from Ursinus College (Collegeville) in 1973 and then headed north, where his advanced education culminated in his receiving a Ph.D. in early American History from the University of New Hampshire (Durham) in 1983. His dissertation was entitled: “Revolutionary New Hampshire and the Loyalist Experience: ‘Surely We Have Deserved a Better Fate.’” To this date no one has asked him about the Loyalists of New Hampshire. It was during this period of his life he first (and last) rode a horse with unfortunate results culminating in sore muscles, a fear of decapitation, and a resolve not to ride another horse in his life. He was not yet a Westerner.

Dr. Bob entered the museum field in 1979. He was employed at Strawbery Banke in Portsmouth, New Hampshire, the T. C. Steele State Historic Site in Nashville, Indiana, and the Museum of American Textile History in North Andover, Massachusetts, before heeding the call to move west, hired as the Director of the Historical Museum at Fort Missoula, in Missoula. He immediately fell in love with the town and the West.

Under his direction, and with a tremendous staff, the Historical Museum at Fort Missoula became accredited by the American Association of Museums, one of only 700 accredited museums in the nation and one of only six accredited in Montana at the time. The museum campus grew, buildings were added, and a concentrated effort was made to increase the number of exhibits in the main Museum building and outlying campus buildings. Dr. Bob helped spearhead the successful electoral campaign by which voters of Missoula County approved museum funding. Additionally, the move in the direction of national recognition as one of only four internment sites of the Japanese-American Alien Detention program during World War II began under his direction. Thanks to his marvelous Development Director Diane Sands, that focus culminated with the acquisition of the Post Headquarters building, the only existing building where the trials of innocent Japanese-American men took place.

Always a ham at heart, his love of history guided him to become an actor. Most Missoulians know Dr. Bob as either Captain Charles Rawn or Captain Christopher P. Higgins, as his alter-egos brought frontier history alive. As Captain Rawn, founder of Fort Missoula, Dr. Bob has given scores of presentations to school groups, summer camps, and at the Big Hole National Battlefield about life in the frontier army, the unfortunate affair at Fort Fizzle, and the devastating role that the Big Hole Battle had on the Nez Perce Indians. As “Cap Higgins,” Dr. Bob was always one of the go-to performers at the Missoula City Cemetery’s annual Stories in Stones program where he regaled hundreds of Missoulians and visitors each year about the establishment of Hellgate Village, the Vigilantes, the founding of Missoula, and the economic warfare.

At the annual 4th of July celebration at the Historical Museum at Fort Missoula, and at the museum’s Holiday Lantern tours, Dr. Bob expanded his repertoire to include David Pattee and Francis Worden (also co-founders of Missoula), Lt. Colonel John Brooke (Captain Rawn’s replacement as commander at Fort Missoula), and well-known Americans such as John Adams, Thomas Paine, Patrick Henry, General U. S. Grant, James Garfield, and others. Dr. Bob is the recipient of many awards, most recently the 2016 President Award for service from the Museums Association of Montana, the 2014 Award from the Society of American Foresters for service to the Forestry Interpretive Area at Fort Missoula, and the 2014 Dorothy Ogg Historic Preservation Award for Individual Contribution to Historic Preservation from the Missoula Historic Preservation Commission.

Upon retirement, Dr. Bob wrote the book, Captain Charles Rawn and the Frontier Infantry in Montana for The History Press. Of the book, author Gary Glynn, a fourth generation Montanan, who has been writing about the Treasure State for more than twenty years said, “Dr. Brown has given us a rare and long overdue insight into the day-to-day lives of the front-line officers who were the backbone of the frontier army during the last half of the nineteenth century.” Also, upon retirement, Dr. Bob volunteered at the Historical Museum as a costumed interpreter, continuing to bring Captain Higgins alive to visitors from around the world.

In 2021, Dr. Bob and his wife Claudia, married 44 years, moved to New Mexico where he continues to enjoy life in the West, but in a warmer West. Claudia has followed Dr. Bob everywhere he’s gone, supporting his efforts, tolerating his eccentricities (even as she wonders who is going to be his next alter-ego), and being his best friend through it all.

Dr. Bob has still not gotten back on a horse.