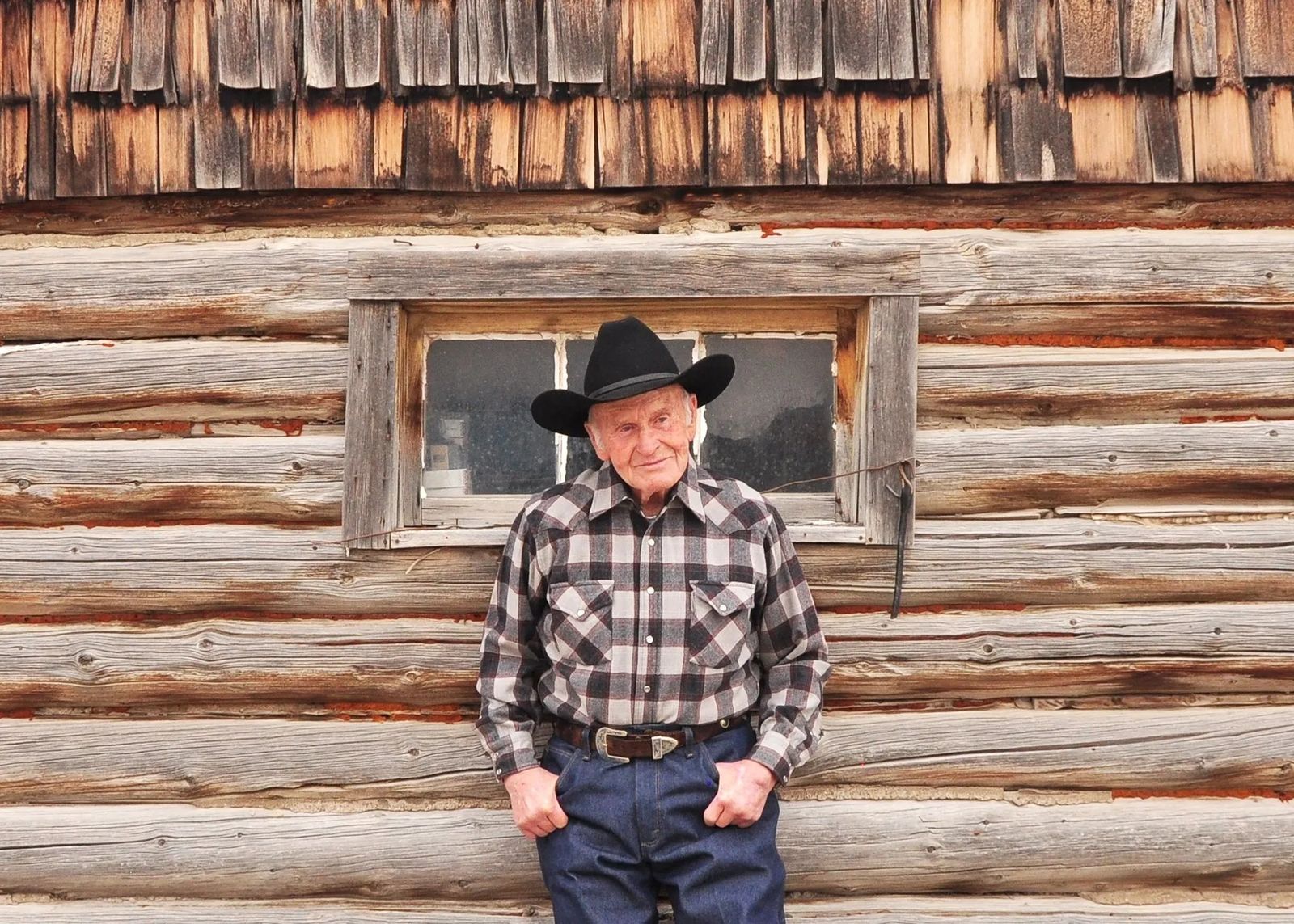 Patrick “Pat” Bergan was born August 11, 1933, in White Sulphur Springs, Montana, the fifth of six children. He was raised in the basement of the County Jail, as his dad Mike was the County Sheriff for many years, and who also had a small ranch west of town.

Pat always had a job during his years of schooling. For many summers, he and his buddies worked for Tony Gasper on Freeman Creek, just north of the privately owned 50,000-acre Lingshire Ranch. Riding every day, they learned the lay of the country and how to “cowboy”. Doing what boys without supervision do - they would venture off to rope wild horses and cattle, bear, and elk - just for the fun of it.

After marrying June Edwards in 1957, he settled down a bit by driving truck, hauling lumber and cattle. He was a skilled hunter and trapper and a self-taught gun smith; crafting several “one-of-a-kind” revolvers.

Getting back to cowboying, he went to work for Bill Loney and then Bill Galt; maintaining a cow camp - tallying nearly 50 years at the Lingshire Ranch. He engineered most of the ranches roads and was a whale of a cat-skinner with a D-6. “A good job makes a good road” translated into “always keep the dozer full.” Pat Bergan could get more done working by himself than a lot of big crews working together.

Whether it be roping a run-back steer through mounds of badger holes and over rock outcroppings, chasing wild horses full tilt down long ridges or running through coulees just for the pure thrill and the hell-of-it, Pat was pure no-fear, real-deal, blatantly-honest and as western as they come. He treasured his days at Lingshire – describing it as “Big Country,” as it encompasses four counties and an area about 25 miles square with only cows, wildlife and a few cowboys. He came to know every square mile of it like the back of his hand, covering thousands of acres while gathering cattle, checking fences, trapping and hunting.

Pat was a real cowboy’s idol to the ones that knew the difference. He enjoyed good gear – his saddle made by Tom Tomey with a big “dinner plate” horn, a nice breast collar with silver conchos, and a special silver bit handcrafted by Larry Kane. He dressed neat, but not like the fancy Buckaroos of today’s fashion. Pat was not a big man in stature but liked to ride big horses. His natural athleticism always allowed him to mount with ease. Pat’s last two horses were big stout bay geldings that were full brothers but as opposite as they could be. “Rip” was thick-skinned and slow, “Rusty” thin-skinned and nervous, but very athletic. He put in many hours with each of them to get them to meet in the middle.

Because of Pat’s lack of fear, confidence and determination, he had found himself in a few wrecks, well to be truthful – more than a few, well - maybe more than quite a few. Pat had a horse tip over on him, one of many, bunged him up some, and broke that big saddle horn. He had it rebuilt, but the horn had to be made smaller. He has been bucked off countless times, broke his neck in a car accident, had a bullet lodged in his arm, and lived with a separated collar bone. But as Pat said, “comes with the territory,” and more often than not, after such a wreck he would say, “more experience.”

Pat often chased coyotes with his pickup. One time he should have given up the chase a little sooner……. he and the pickup rolled down the side of a gulch, all the time fighting with a loaded 12-gauge shotgun, and a loose bottle jack. He didn’t win. When the dust settled he had nearly cut his nose off. After walking four miles back to Birch Creek Pat remarked,” good thing it was as cold as it was or I would have bled to death”. After a little hospital time he was back to work at the ranch. Even after all of his wrecks, you never heard him say, “I never should have done that.”

Spending time with Pat at Lingshire was not always pleasurable, for his cowboy “get’r” done attitude meant doing it the way the boss wanted it done, which included very early mornings, short nights, cold winters, and hot summers. The hard work was never something Pat shied away from as he truly embraced it, the good and the bad. He was known to stop for a “hootch” (or two), have a laugh, and visit with his many friends at the local watering hole. He was known for his bright blue eyes and that million-dollar smile, as well as his many country sayings: “Don’t take any wooden nickels,” “Just let the tail go with the hide,” and “How goes the battle”. If you ever got a “Well, I’ll be go to Hell” it meant you did something good. Pat always carried his “blific” bag - it always had what you needed.

As a self-proclaimed pilot, Pat thoroughly enjoyed the adrenalin rush of flying his Super Cub. He flew to Alaska twice, but most of his hours were accumulated by flying the skies of the Smith River Valley. He was a highly skilled and talented pilot with a daring attitude that led to several exciting ventures. Like the time he touched down on the roof of a car going down the county road. He was reported to the authorities and would have lost his license if he had had one.

More importantly - being a cowboy - Pat often said, “that is all I ever wanted to be.” His loyalty and dedication to the job, work skills at the ranch and cowboy way of life is deeply appreciated by all who had the privilege to know and work with him. Pat passed away on July 20, 2019. The grasslands of the Lingshire Ranch have honored Pat with his final resting place on the land where he left a mighty big imprint.