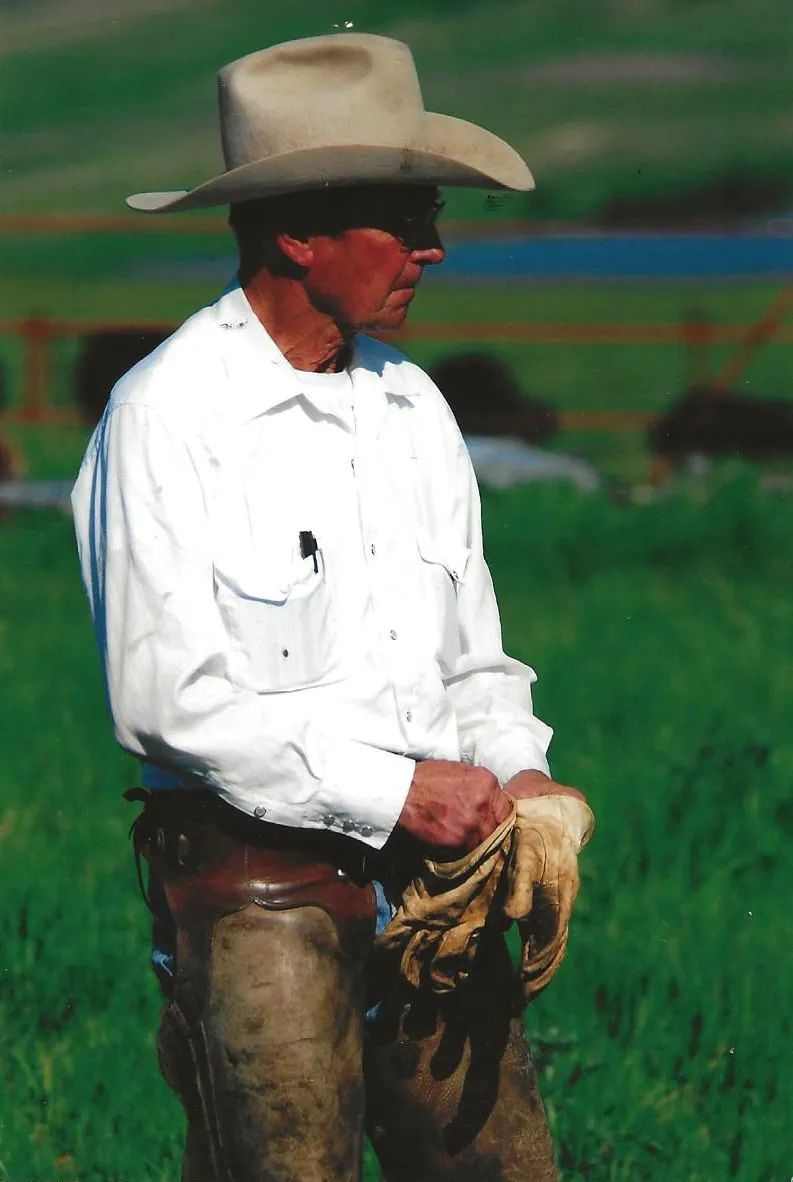 James Andrew “Jim” Lind was born on July 8, 1931, in Stanford, Montana, when his parents, Fred and Lydia, were farming at Coffee Creek. He was the third of seven children born over an eighteen year span. In 1936, Fred moved his family to the Beaver Creek Ranch, 32 miles northwest of White Sulphur Springs, to help his dad run the family ranch. Jim’s Grandpa, Andy, thought every kid should grow up with a horse so he made that happen. Young Jim rode everywhere he went and when he wasn’t doing chores, he could be found doing something with horses.

Jim began his education in a one room school house located on a hill just above the ranch, with his mother as his teacher. Ranch life suited Jim right from the beginning. Since he was 13 years older than the next brother a lot of the work and responsibilities fell on Jim. No electricity or running water to the house meant that there was a lot of wood to be sawed, split and hauled for heating and cooking. The water had to be carried at least once every day.

When Jim was a sophomore in high school at White Sulphur Springs, his Grandpa Andy became ill. Jim was shouldered with more responsibilities. He tried to keep up in school and help at the ranch, but that was more than he could do. The ranch life won out. Grandpa Andy was an excellent stockman and guided Jim in his stockmanship skills that he used in his 70-plus years as a rancher. He has an uncanny ability to tell when a calf is sick, a horse isn’t right, or what a cow is thinking even before she does.

All of the ranch work was done with horses. Jim spent a lot of days behind a team of horses mowing or buckraking hay in the summer to feeding cows in the winter with a bobsled. For a good number of years Jim and his sister Frieda would trail the calves the 32 miles to town to sell in the fall. They would then turn around for the ride back home. Jim successfully rode saddle broncs on the rodeo circuit purely as a challenge.

Like many young cowboys, Jim, with his adventurous spirit did everything horseback. Roping a bear was not one of his better plans. He got the bear roped, but then the bear switched directions and came back up the rope at him. Jim lost his rope in short order but gained some mighty good wisdom that day.

Jim was considered by the few neighbors, who lived in the 20 mile area, as the “White Knight of Beaver Creek” as he would make a circle once or twice a year to check on each of them. He was a welcomed sight delivering mail, sharing news, and getting messages in or out to loved ones. On one occasion, while checking on an older couple in mid-winter he found the snow was so deep and drifted that it had covered over the windows and the yard fence. He stayed horseback for a short visit as there was nothing to tie his horse to.

Another time Jim was training a challenging horse that he liked but would buck every day. That wasn’t so bad, but he bucked at unpredictable times, and never when you first got on. Jim thought the horse needed a good sweat so one morning he saddled up and headed to Antelope Gulch to visit some friends some eight miles north. He came upon some “free roaming” horses, got a few cut off, and trailed them home with the idea of breaking them to sell. He hurriedly put together a little corral from an old fallen down fence line and got them to go in, but before he could get the wire gate shut they all got out but one. Jim got him roped and had him halter broke by the time he arrived home. He wrapped that up to a good day — a new horse in the corral and he had ridden a full day with his saddle horse not once offering to buck. Well, darn it, he spoke too soon. That horse started bucking like there was no tomorrow. It was time to do something different, he was getting better at bucking than Jim was at riding.

During one tough winter he and Jack Short were helping another neighbor feed his cows while using a six mule hitch, with one mule new to the task. A front tire on the hay wagon blew out, scattering rocks, and made a hellacious boom. The new mule was in the back and tried his damnedest to get to the front of the team. Jim was sawing the lines this way and that, numerous times before getting the mules under control. When things settled down the load of hay was intact.

Jim was selected as the official drover representing Meagher County in the “Big Centennial Cattle Drive of 89”. Jim had several cattle in the drive from Roundup to Billings, including a Longhorn steer that carried the big “89” brand on the ribs. That steer lived out his retirement on the Beaver Creek Ranch.

Jim married Dellamae Olsen in 1957, and together with hard work, perseverance, tough bankers, and some luck, they leased and bought enough land to run 900 cows. Jim’s passion for life as a cattle rancher has been passed down to his family and anybody who has had a chance to ride with him. Any ranch hand worth his salt admired Jim’s ability to “cowboy”, but secretly couldn’t wait to see what Della had cooked for lunch. If a neighbor was having trouble moving cows, sorting strays, or what have you, the best feeling was to look up and see Jim Lind unloading his horse from his trailer. You damned well knew you were saved from a wreck.

Jim is a lifelong learner, very curious about the world around him, which has gained him a lot of knowledge. He always tried to do things the right way, not just the old tried-and-true way. Jim continues to teach the future generations of friends, grandkids and great grandkids about horses, life, and responsibilities. His willingness to do so is endless. No question too stupid, but the message may be clear as a bell and answered with just a twinkle in his eyes. Few words spoken; few words needed. For most of his life, time in the saddle was and still is a common place for Jim. At 90 years old he still dons his hat and gets horseback for the day’s work. One always feels like it is an exceptional honor to ride with Jim Lind, truly one of Montana’s last real cowboys.