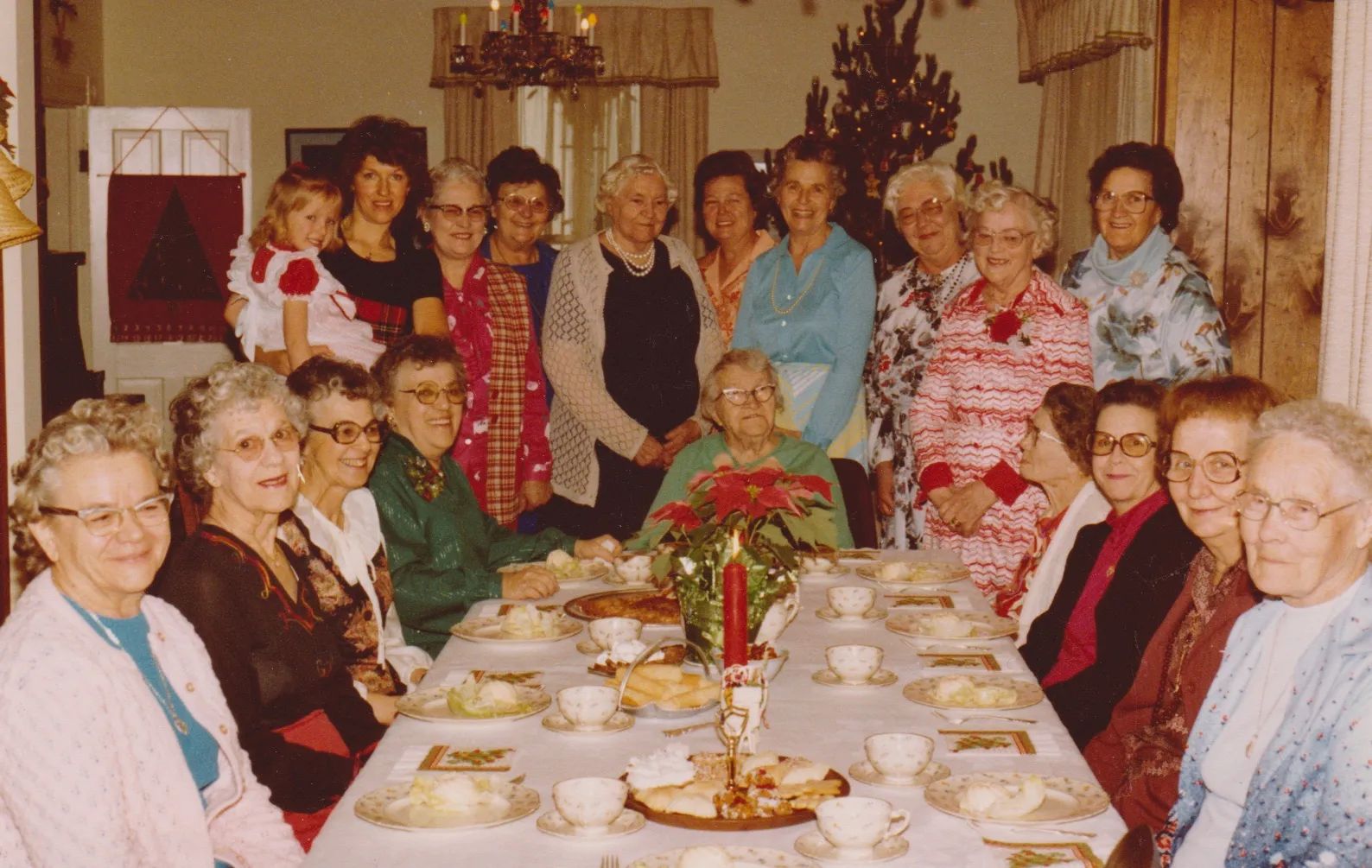 The Kill Kare Klub of Sweet Grass County, in 2021, is enjoying its 111th year of membership and memories. This group was generally located along the north side of the Yellowstone River, about ten miles west of Big Timber, Montana. After the Voges Bridge was built in 1914, ladies from the south side also joined. The following excerpt from the minutes of 1951, tells us about its beginnings.

“This club started in the early 1900’s by Kate Officer Florman who invited a small group of neighbor ladies from the nearby ranches. There were very few neighbors in those early days and we were all delighted to get out and see them. From that first meeting, others did the same. We would take our sewing, mending, and our children and spend a very pleasant afternoon with maybe cookies and tea or coffee served.” The ladies did indeed, kill their cares and go to club. They walked over the hills to “Klub” or rode horseback or came by buggy. In later years, cars made it possible for more women to join and getting to Klub became easier. That’s how Carpooling in cattle country got its start…

These ladies were ranch wives and mothers, cattlewomen and Cowbelles, country women and cowgirls. Their skills were many in helping their husbands in all facets of ranching. Today, fourth and fifth generation daughters belong. Of our current twenty-two members, only five are under the age of 70. We have ladies ranging in age from 42 to 100 years old. One neighbor, who joined at the age of seventeen, was a member until her death at age 99 - a Klub lady for 82 years! Over the course of our existence, we have had around 130 women in Klub, some coming from Norway and Canada, others from various states, some from other towns in Montana, and still a respectable number from Sweet Grass County. They either married into Klub or gave birth to Klub children.

As Klub members, they also engaged in civic activities such as making lap quilts for the soldiers in World War I and rolling bandages during both world wars. We have also sent phone cards and packaged goods to the soldiers in Iraq. In recent years, we have donated money for playground equipment and aided in purchasing the coronary unit at our local hospital among other things. Generous donations over the years have gone to national, statewide and local organizations to aid in assisting mostly children’s needs.

Money-raising projects include a Centennial plate depicting the county from its origin, basket socials and raffles. For our Klub Centennial Celebration in 2010, we published a history book with favorite recipes in the back, selling around four hundred copies. We also had a fine display of our Klub happenings at the county museum that year, which included an intricate quilt, retrieved from the pioneer family of Gages. They were the first white family to settle in Indian country along the Yellowstone River in this area and descendants became Klub members. Our Centennial also included an entry in the annual rodeo parade which displayed a large banner walked down the street by Klub members. This was followed by a refurbished manure spreader pulled by a vintage tractor that was filled with Klub ladies in bonnets and wide-brimmed hats. What fun that day was and oh, the comments and pictures!

During the era of wood stoves and fireplaces in beam structures or log cabins, fires were a constant concern. Four member’s homes have burned over the years and unfortunately, many of our early Klub minutes and programs were lost. Fortunately, we were able to gather up information and some old Klub notes and entertainment programs from members who kept these treasures. We have lovely pictures that we enjoy from gatherings over the years. Some of these photos show the large picnics that included the men folk and neighbors who came to share good company and good cooking. Other mementos remind us of wedding anniversaries, baby showers and programs put on by the Kill Kare Players who entertained during some events.

One of the goals of Klub was to lighten the load of fellow members and neighbors. When fires destroyed homes and outbuildings, the ladies and their husbands banded together to help rebuild and restore, sometimes doing farm work or tending livestock of the affected families. Other times, the ladies cooked meals to be served at farm auctions to help out. In recent times, we had a grand yard sale that plumped up the treasury. The ladies are always generous at Christmas time when we give to the local food bank, senior pantry or school children in need of items.

The Klub grew and spread out to include ranch ladies from Springdale and those under the Crazy Mountains. The recorded history of country schools in this county says that in 1908, there were 723 rural students and thirty-nine schools. Nine of these country schools in operation at one time or another, were located in Kill Kare country. The children walked to school or were ushered by horse and buggy or rode horseback. Eventually, most of these schools were closed and the students were bussed into Big Timber.

Today, the ladies of Klub still enjoy gathering. Our dues for the year remain at one dollar and that hasn’t changed in fifty years. We get together in homes or frequent the good restaurants in Big Timber, sometimes gathering at the Senior Center for a great meal. One mainstay of Klub was to find a delicious new salad or dessert to serve at Klub. Recipes got very interesting with the advent of canned tuna and shrimp. Store-bought fruits and Jell-O packets provided delightfully tasty treats. Of course, with produce from the garden or cellar we made company-worthy dishes. And there were always nuts, licorice and chocolates to appear along with fine coffee, tea and lemonade.

Once a year, we take field trips to close-by towns to see the sights and enjoy the afternoon. Fortunately, our road system is much improved over earlier days, so getting stuck in a snowbank or a muddy hole doesn’t happen as frequently now. When it did, there was usually a husband or neighbor around to get out the old farmhand or tractor and pull out a carload of stranded women or help change a flat tire.

Our hope is that Kill Kare Klub will continue to flourish and maintain a viable membership throughout the coming years for the Ladies Along the Yellowstone. It has provided such wonderful entertainment and fellowship with like-minded country women who understand living in rural Montana communities.

Reference: Memories of the members of the Kill Kare Klub