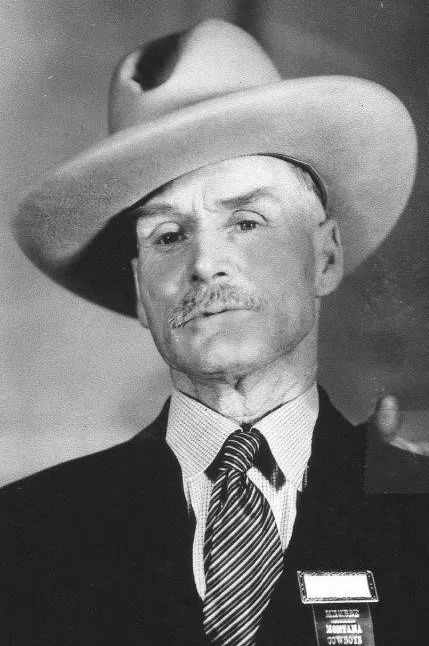 Richard Thomas “Dick” "RT" Loss, known as one of the best bronc busters in the Montana Territory, was at home on the back of any mount. He was a personal friend to Charles M. Russell and Rev. William Wesley "Brother Van" Van Orsdel. In 1938, Dick became a charter member and served as president of the Montana Cowboys Association located in Great Falls, Montana.

Dick was born in 1873 at Fort Hayes, Kansas, to Robert F. and Annie (Crosby) Condon Loss. Robert married Annie in 1871 at Fort Wallace, Kansas. Annie’s daughter, Mary Condon, was born at Fort Dodge, Kansas, in 1866. In 1878, serving as a soldier with the U.S. 3rd Infantry, Robert was sent to Fort Shaw to protect the burgeoning mining settlements of south-central Montana. After 21 years of service, he retired in 1884. Then in 1891, the family homesteaded near Square Butte, located between Fort Shaw and Cascade, Montana, on St. John’s Creek a few miles from St. Peter’s Mission.

Dick’s brother Robert W. “RW” was born at Fort Wallace, Kansas, in 1871, and his sister Louisa at Fort Shaw, Montana Territory, in 1878. They all attended the Fort Shaw School.

At age 15, Dick began working for the NS Horse Ranch owned by Dan Morris, who had the mail contract for the area. In addition to working as a cowhand, he was also hired for two years to deliver the mail twice a week by horseback between Fort Shaw and Augusta, which included an overnight stay at an Augusta hotel.

Dick once told the attendees at an Annual Montana Cowboys Association meeting about an encounter with a horse he once rode named Change Ends, when he worked for the NS Ranch. Change Ends was known as a cayuse of the early days and according to the old cowboys, it took Dick Loss to ride him. Dick admitted he rode Change Ends, but said it was by chance.

“My partner and I picked up this horse, along with another, one day near Ulm, Montana. I’d heard tell of Change Ends but didn’t know him by sight. Neither did my partner. I put my saddle on him and figured I would see what this strange horse was like. Well sir, we came off that sand hill near Ulm at top speed. It was a good thing it was sandy because that animal changed ends right in the middle of a jump and if it hadn’t been for the sand slowing him down, I would have been off and landing hard. When I got to the NS, the boss, Dan Morris saw me and said, ’Do you know what horse you’re riding?’ I told him I didn’t, and when he said it was Change Ends, I was plenty glad I hadn’t been introduced before the ride.”

Dick took part in cattle drives and big roundups during the open range days, when fences, bridges, and most towns were nonexistent. He commonly rode from Fort Shaw to the Sweet Grass Hills, Chestnut Valley to Belt and participated in the Chestnut Valley Roundups in Montana.

In 1895, he went to work for the Hastie Horse and Cattle Ranch, and then for the “F” outfit, formally known as the Floweree Ranch in the Sun River Valley. Dick worked several years as a top cowhand at the “F” ranch and wrote “in 1902 they rounded up 10,500 horses and shipped them to eastern markets.”

In 1898, Dick met Margurite Rose "Maggie" Demars at a local dance and they were married at Saint Peter’s Mission in 1899. The couple had seven children: Sophie "Sally", Mary, Margurite "Tiny," Richard, Clarence “Buster” "Bus," Francis "Babe" and Mabel "Sis," born between 1899 and 1910. All were baptized at the Mission.

Dick managed the family ranch until 1932, when a few years of drought forced them to relocate to Fairfield, Montana, where he farmed and ranched with his son, Babe, on the Earl Holiday place. They later purchased the Harris place, west of Fairfield, to raise cattle and sheep.

The family enjoyed being part of the Fairfield community. Dick and Maggie were involved with the Teton's Oldest Settlers "Old Timers" group. They also loved to waltz and were well known as excellent dancers. Dick was described as a very robust man and was always the boss of the family.

One of his favorite pastimes was to take his sons hunting. When fall chores and roundups were over, they headed for the Sun River Canyon. Before horse trailers, Babe and a friend, on horseback, would move horse’s cross-country from the Fairfield area to the trailhead. The hunting party would then take a team and wagon, with their gear, as far as the trailhead and pack into Patrick’s Basin with a string of over twenty horses. After the two-week hunt was over, the game was loaded and the packhorses turned loose. After a few days, the hunters would return to open gates and the horses eventually found their way home.

In the summer months, you could catch a glimpse of Dick high stepping his favorite horse, Pal, through the streets of Fairfield, during the annual downtown parade. He was a beautiful shiny black horse that had a reputation. Pal knew the parade routine and would start prancing as soon as the band started playing. In the late 1940s, Dick rode Pal in Great Falls with the famous Singing Cowboy, Gene Autry, during the North Montana State Fair Parade.

When he was in his sixties, he watched his sons and some local boys having a hard time breaking a horse. So, he nonchalantly entered the pen and showed them how it was done. At 80, Dick retired from working on the ranch, but continued to help out at roundup time and would swim his horse across the canal for a stray if needed. Befitting his nature, the first time he ever drove an automobile, Dick put it through a fence, as he didn’t understand the concept of the brake pedal, and instead pulled back real hard on the steering wheel, the whole while hollering “WHOA!”

Dick Loss died in 1971 at the age of 97. Maggie died in 1963. They were partners in life and now lay together in Sunset Hills Cemetery outside of Fairfield.