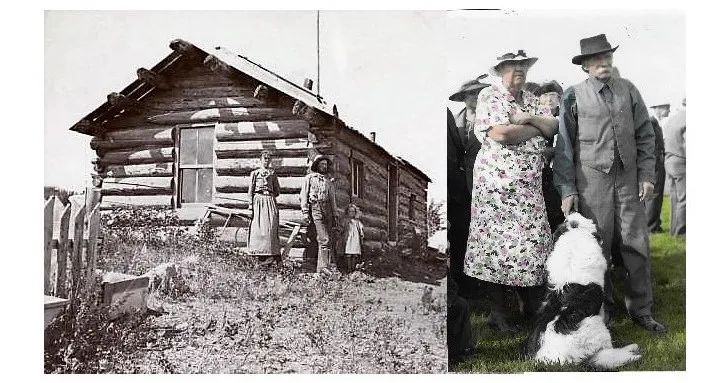 In June of 1888, Jerome “Jerry” A. Kearful traveled from St. Joseph, Missouri, on a railroad work train, into the untamed Montana Territory. School studies had inspired him to venture west for a better living. Born in Morgan County, West Virginia, January 11, 1867, he was the ninth child of Charles and Phoebe Anna (Dike) Kearful. Jerry tried his fortune at mining for gold in Helena, before settling in the Clear Creek section of the Bears Paw Mountains, fifteen miles south of Chinook, using squatter rights.

Flora May Tibbits was born to Judson W. and Rachel (Green) Tibbits in Davenport, Iowa, on December 10, 1871. Following the loss of her parents, she migrated with her older brother, their grandmother and two old-maid aunts, to South Dakota. After five years of “starved-out” farming, they gathered their remaining possessions and located to Chinook, Montana on an emigrant train in November of 1889. The resident homesteaders offered supplies, food, coal and labor to build their home in Clear Creek. Flora had superb side saddle horsemanship and was an excellent shooter and trapper, selling pelts at the general store of Thos. O’Hanlon Co. in Chinook. When age twenty-one, she qualified to homestead and soon realized she was one of only two single women within fifty miles of her settlement.

On a neighboring homestead, Jerry Kearful joked of Flora Tibbits, “If the young lady isn’t Kearful (pronounced “Careful”) she soon will become one.” When they were engaged, a traveling photographer took their engagement picture. With her aunts as chaperones, Jerry and Flora made the four-day round trip to purchase their marriage license by horse and buggy to the Chouteau County seat in Fort Benton. On January 5, 1895, they married in Havre and joined their homesteads as the Eden Ranch.

Their home was the cabin Jerry built in 1890, with logs he had cut in the Bears Paw. He added onto the cabin after he and Flora were married. When logs were needed for building, Jerry made it fun for his family by camping and picnicking in the mountains. In 1916, a mail-order house was purchased from the Sears & Roebuck Catalog and constructed on a knoll overlooking the garden and meandering creek.

The Kearful’s raised chickens, cattle and sheep. They operated a huge truck garden, with the usual vegetable plantings, along with melons, grapes and tobacco for Jerry’s corncob pipe. Locally, Jerry was known as the Clear Creek “Cabbage King”, having had heads that weighed as much as twenty pounds each. He always maintained that “Corn should be knee-high by the 4th of July.” The family would work through the night gathering produce, butchering and preparing chickens that Flora transported to Havre by horse and wagon in the cool of morning, proudly selling door to door. Because the produce and meat was top notch, they earned a substantial amount of income prompting the reference as “The Bonanza Farmers of the Bears Paw.” When robbers began waiting outside of town to steal their money, Flora commenced to carrying a pistol and lengthy horse whip. Attempts became less after that. Jerry was leary of banks and kept his money buried in the back yard. Flora deposited her money and when the banking system crashed, she received one cent for every dollar.

At the first Hill County Fair, in 1912, the Kearful’s were awarded a sizeable trophy cup by Jim Hill of the Great Northern Railroad, promoting agriculture, for the best display of irrigated grain and vegetables.

Daughters, Phoebe, Josephine and Marion assisted with the daily chores. Josephine’s passing, at fifteen, instilled deep faith in the Lord and it was at this time the Kearful’s began hosting church services in their home. When Marion divorced, the couple took in their nine year old granddaughter, Fay, and lovingly raised her.

Flora believed, “Life’s richest dividends consist, not of money, but of happiness and contentment.” She crocheted, groomed her two-acre yard, wrote of Montana life for the Daily Tribune and was devoted to her husband. At age 70, she was given an old Model T Ford and a willing young hired man taught her to drive. Never shifting out of low gear when taking Fay to school, kids would delight in passing the car on their horses. Jerry disliked the Model T, refusing to ride in or have anything to do with it.

Jerry continually carried his gun to eliminate the wolves killing livestock. Ducks and geese were harvested to make feather pillows and beds and when he began raising grain, the mattresses were stuffed with straw. Jerry trapped beavers and muskrats and sent the pelts to St. Joseph, Missouri, which were made into coats, muffs and driving gloves for his family. Living up to his reputation of being a tireless worker, Jerry created and cleaned miles of irrigation ditches by hand to collect any spring runoff. He made his shovel handles from willow trees and fence posts from timber along the creek. In the spring and fall, he traveled to town, for supplies, tend to business and to enjoy a few cold beers. The long-legged carriage horses he rode had endurance for herding cattle as well as power for pulling the plow and wagon. His sheep dog was always close beside him, helping move the nearly 500 sheep to forage. He read everything he could lay his hands on and wrote articles for the Northwest Magazine. Knowing the importance of community, he belonged to the Knights of Columbus, Eagles Club, and respectfully served on juries. Believing education was vital to sustaining a more comfortable life, he was instrumental in establishing the local school district, housing teachers and serving as a board member.

One fond family memory was of Flora and the educator being caught in an electrical storm when returning to the ranch from town and going astray. After several hours of wandering, they unhitched the horses from the wagon, both mounted the same steed, who upon being given his head took them safely home.

Over one hundred old timers and friends gathered at the Eden Ranch for a picnic in June of 1938, to celebrate the Kearful’s 50th anniversary of continuous residence on Clear Creek. The young folks played games and the older ones were entertained with music and stories of the early days in Montana. They reminisced of courage, endurance, overcoming hardships and love of the land.

Flora passed away on January 18, 1945, and Jerry on March 28, 1947. The Great Falls Tribune, Independent Record and Havre Daily News referred to Jerry as “One of this section’s most esteemed pioneers.” The couple are buried in the Calvary Cemetery, Hill County, Havre, Montana. Their daughter, Marion later over saw the operations of the Eden Ranch, now managed by a great-grandson, Fred Olson. The Montana Historical Society’s homestead photo of the Kearful’s beside their log cabin in 1900, is evidence these tough pioneers helped settle the West, making significant contributions to the foundation of Montana’s western heritage.