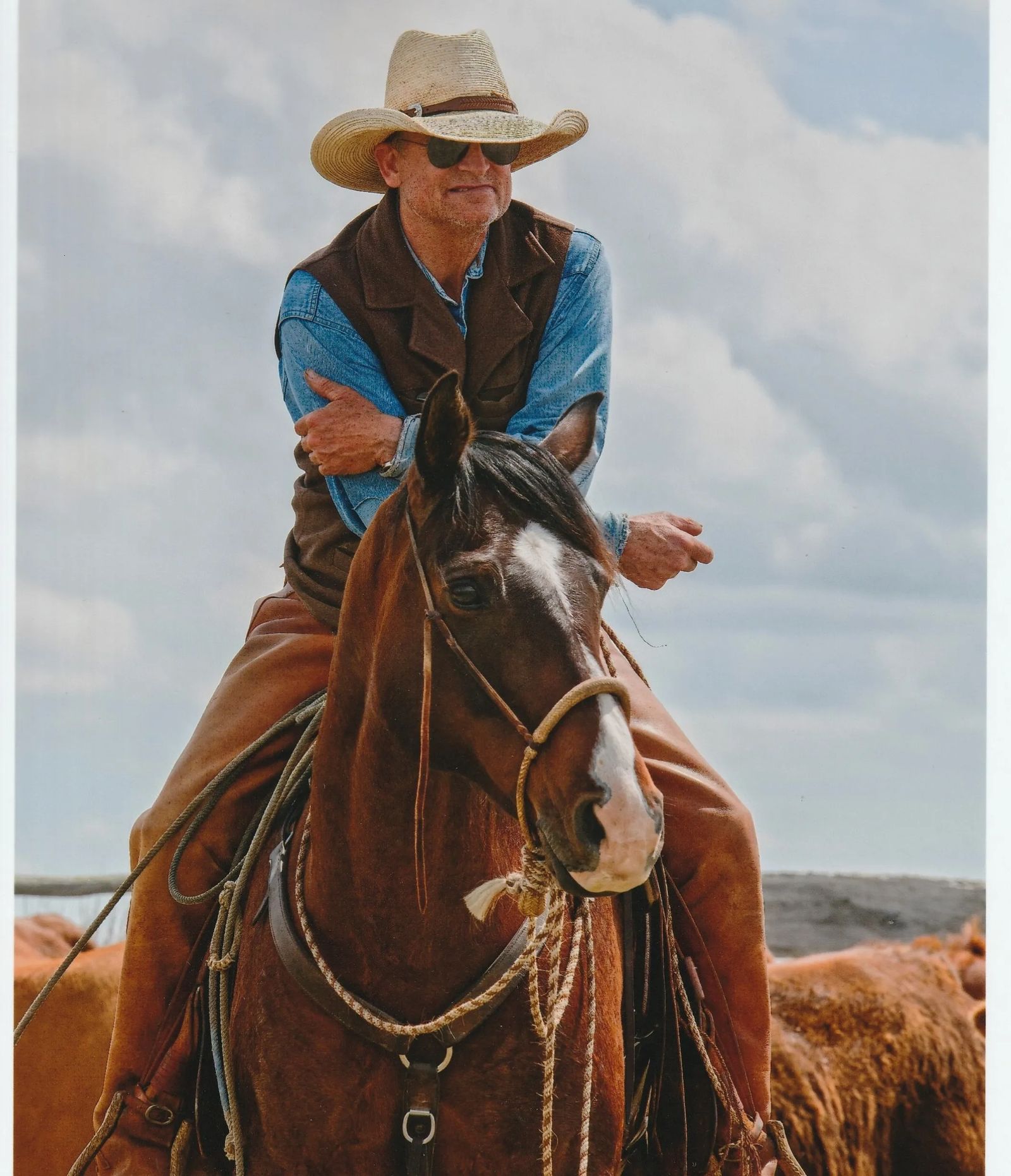 Wallace Kirk Badgett was born May of 1952. He grew up on the family ranch on Otter Creek, located in southwestern Powder River County, rich in old Western culture. Wally had a plethora of role models starting with his Granddad Shorty, who was long gone before he planted his own feet on the ground, but Wally heard plenty of stories about the old cowboy throughout the years. What impressed him most was that his grandad lived during the Civil War and that Shorty was partner of Col. T. J. Bryan, the first president of the Montana Stockgrowers, when the Eastern Livestock Growers Association consolidated with the Montana Stockgrowers in 1885.

Wallace’s dad, Kirk, and uncles, Wallace, Lee and George, true Montana cowboys, certainly impacted his love of ranching. When he was a young lad, his brother George, who was ten years older was his hero. Wallace truly followed in his brother’s footsteps. As a young cowboy, “Wally” rode calves at brandings, participated in every local rodeo he could and gradually moved up the ranks to college rodeo and eventually the RCA (Rodeo Cowboys Association). Wally entered every event except steer wrestling, specializing in bronc riding and bull riding. He liked both events equally, but was a little more successful as a bull rider although not necessarily more famous. In 1971, Wally attended Sheridan College in Wyoming where he started his college rodeo career, winning the NIRA (National Intercollegiate Rodeo Association) bull riding championship that year. One season he ended up with a broken bone in his foot after riding in Baton Rouge, Louisiana. After that he couldn’t put pressure on his foot in the stirrup for bronc riding, but still competed in the bull riding. Wally remembers being very aware of how he was going to dismount after each ride. He finally took the summer off so that he could heal. By the time he was 21, he earned a trip to the NFR in bull riding where he ended up 8th in the world standings.

Tired of traveling, “and never good at it anyway” he wanted to be home. At 28 years old, he hung up his bronc saddles and bull rope; leased a portion of his dad’s ranch on Otter Creek and settled back into ranching. Wally married Pam Taylor from Kinsey, Montana, and two children, Whitney and Brett completed the family. Wally also helped out as part-time deputy for the Rosebud County Sheriff’s Department.

In 1985, the family moved to Miles City and started anew. Wally tried his hand at several careers including 14 years with law enforcement, as a Custer County deputy sheriff under Tony Harbaugh and as rodeo coach at Miles Community College for 20 years. Good naturedly, Wally claims his most successful coaching style was to tell the team: Watch me and do the opposite!

In the 1990’s Wally injured his back. To pass some time away, he started doodling with cartoons. As a small child he had an avid interest in drawing. Wally admired the artistic styles of Will James, CM Russel, JK Ralston, and Stan Lynde. He met cowboy poet, Baxter Black along the way who graciously gave him some useful tips on marketing. People started noticing Wally’s sketches, particularly Sheriff Harbaugh who said to him, “Wally, you probably ought to do something with your cartoons; maybe you could make a livin’ with them.” That was a pivotal moment for Wally’s next career as a syndicated cartoonist, first under Magpie Enterprises, where every cartoon manages to have a magpie or two in it, to eventually changing the name to Big Dry Syndicate. In each of the drawings the main character is “Earl”. Wally uses humor and realism to portray the hard-luck cowboy. In the minds of people close to Wally, they wonder if some of Earl’s predicaments may have actually happened to Wally - a.k.a. M.C. Tin Star.

All of a sudden, or so it seemed, Earl could be found in over 150 local, regional, national, and international publications. Wally has since had fourteen books published along with various stationery and yearly calendars. He attributes his success to his wife Pam, who helps with marketing and sales as well as keeping him in line---"She Who Must be Obeyed” is a common theme in his cartoons.

Wally and Pam’s children share common interests with their parents. Brett is a member of the PRCA (Professional Rodeo Cowboys Association) competing in Single Steer Roping. He is currently the Equine Instructor at Miles Community and a successful artist, creating lifelike Western images in paintings and sculptures. A teacher like her mom who retired after 30 years in elementary education, Whitney is currently teaching art in Bangladesh.

When asked how he has contributed to Montana’s Western heritage, Wally replied “I feel my cartoons portray the realism and humor of the cowboy.” Some of those cartoons can be found in his fourteen-book series entitled Cowboyin’ With Earl.In his retirement from coaching, Wally stays actively involved in preserving cowboy history and culture while serving as the current Vice President of the Range Riders Museum in Miles City. He can always be found in the front of the chutes at the annual World Famous Bucking Horse Sale and other local rodeos, encouraging young men and women participating in the sport of rodeo.

Thinking back on the days of old - the one thing Wally misses the most is the pleasure and satisfaction of feeding cattle from a hay wagon with a team of horses. He is passionate about preserving the history, stories, and humor of American and Montana cowboys and cowgirls… all those heroic individuals past and present that have so influenced his own life. Wally truly believes the adage found every year in his calendars, “measure your wealth in friends not money.”