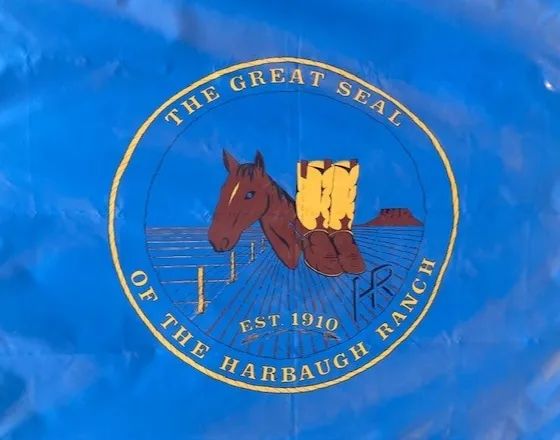 Harbaugh Ranch was established in 1910, when Walter Lee “WL” and Elizabeth “Lizzie” (Elbert) Harbaugh filed for homestead rights on Sand Creek near Jordan, Montana. Through the years numerous other properties were acquired to form the present day ranch. Leaving behind their extended families in Kentucky and Indiana, WL and Lizzie came to Sand Creek, traveling by wagon from the railhead at Miles City, Montana. WL’s dream had always been to own a large cattle ranch in Montana. He, like many others, was attracted by the wild promises and the romantic notion of settling on free land. The Enlarged Homestead Act of 1909 was the lure to develop new territory in the West.

The Harbaugh’s were both past 40 years of age when they settled in to fulfill WL’s dream. They brought with them their six children, Ralph, Cecil, Bill, Agnes, Carl, and Paul ages sixteen to six, a milk cow tethered to the back of the wagon and a few household items. WL had worn many hats through the years; earning a living as a baker, carpenter, barrel maker, and school teacher. He was a tough, wiry man who cherished independence. WL and Lizzie tried their hand at growing corn, oats, wheat and hay in addition to their gardens as well as raising a few cows. As determined as WL was, the labor intensive, droughted-out years starting in 1915, were overwhelming for even him. His dream of raising abundant corn, lush vegetable gardens and milk- producing cows dried up as fast as the hot sun baked the prairie.

When WL and Lizzie made the decision to move to Miles City in 1922, the two youngest children, Carl and Paul, purchased the homestead and immediately embraced the cowboy way. As partners, then later as neighbors, Carl and Paul began building the Harbaugh Ranch legacy that has endured over one hundred years.

Carl married Margie Fellman and welcomed three into the family, Carl Jr, Gene and Don. Paul married Cornelia McQuiston and had one son, Larry. During their early years of marriage, the two couples, each with one son at the time, lived together in one home. When the house burned to the ground they were forced to set up housekeeping in an old granary. Many stories lead back to the “horrible flies” they lived with. Both couples were ever much the pioneers that their parents were. The men’s vision was steadfast; to build a large enough tract of privately held land that drought, hard winters, and stray livestock grazing their land, could not put them out of business. Many of the early homesteaders had left the country and when they did they often turned their horses loose to fend for themselves. As a result, horses lined nearly every horizon in Eastern Montana. Carl and Paul started gathering horses, breaking them to ride and then shipped the horses to the Midwest to sell. Proceeds from this venture paid for many of the expanded acres on the ranch. In time, the two brothers split the partnership. Paul stayed near the original homestead and Carl moved his family just a couple miles east to the present day Harbaugh Ranch headquarters. Both brothers acquired nearby ranches building their own holdings while raising livestock and horses. Both Carl and Paul preferred livestock to farming and did the majority of their daily work horseback.

Paul and Cornelia continued to operate their ranch for many years after the death of their son, Larry. Carl and Margie, raised their three sons, on their ranch. Carl, Jr. and his wife, Velma, daughter of other homesteaders, Pearl and Elsie Mart, worked on the ranch with Carl and Margie until taking over fulltime management. They expanded the herd of Hereford cattle to include Black Angus and sheep, while continuing to raise wheat. The family did most of the livestock work horseback however, tractors and 4-wheel drive pickups were used for feeding stock.

Carl, Jr. and Velma raised their four children, Sandy, Wade, Tony and Shane in the ranching way of life. Wade and his wife, Bev joined the ranching operation and raised their children, Walt, Wally, Weston and Wendy in the same Western tradition. During this time, the ranch was incorporated and acquired two more neighboring ranches. One was Paul and Cornelia’s ranch as they had decided it was time to retire and sold to Carl Jr., Velma, Wade and Bev. Shane and his wife Holly joined the ranch where they also raised their children, Chantel and Skylar. During these years more land was farmed. Much of it was used for haying to feed their livestock.

Harsh winter storms were detrimental to the sheep industry as were predators. Carl and Wade spent many early mornings in the PA-18 airplane hunting predators and checking on the livestock. Coyotes preyed on the sheep for such a length of time that the Harbaugh’s made the decision to sell them.

As Carl and Velma neared retirement, Wade and Shane bought them out and split the ranch. They both had children interested in coming back to join up with the operation. Wade and Bev continued to manage the Harbaugh Ranch raising livestock and feed grains for hay. Four-wheelers entered the scene, but still horses were used for most of the work. Earlier, Wade and Bev invested in Belgium mules and Clydesdale horses. The couple spent many years attending parades around the state and sponsoring wagon trains around northeast Montana. The mules and horses did their share of the work pulling feed wagons in the winter. Wade and Bev also raised Clydedales and Clyde-cross mules, which have packed many an elk out of the Missouri River Breaks for successful hunters. Wally quit his town job and joined with Harbaugh Ranch. He is raising his four children, Piper, Simon, Eliza and Willa on the ranch, while working with Wade and Bev. Shane and Holly established Four Aces, and are raising livestock and crops. Skylar, also, decided to move back to the ranch to work with his parents. He is married to Kystia and they are raising their family in the ranching custom.

Harbaugh Ranch exists today because six generations have dedicated themselves to a Western way of life - working side-by-side to feed a nation and beyond.