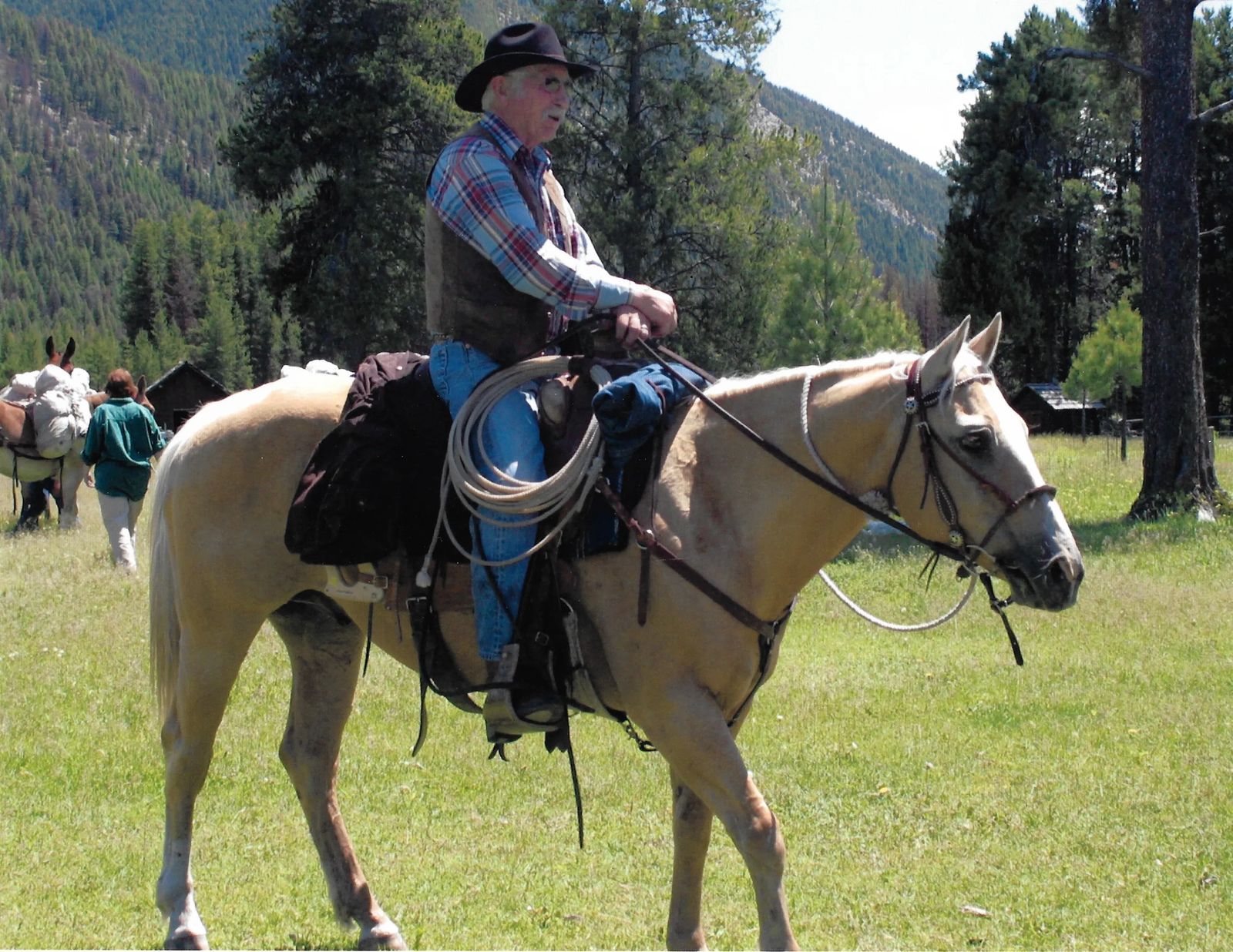 Jack was born in Hermiston, Oregon on November 19, 1930. When he was seven years old he worked with his uncle learning to ride and break horses for surrounding ranchers. And so began his passion of working with horses, which has lasted his entire life. Jack can take a troubled horse and turn it into his companion and true friend, a gift that few can claim.

On a rainy night Jack, at age 13, took a couple of saddle horses and headed to Nevada. He found work training rough stock for the Printey Bros. Ranch. He quickly made a name for himself, because of his strong work ethic and integrity. These traits are just who he was, and who he became, because of the cowboy way of life that he had chosen.

In the late 1940s he and Frank Morgan wrangled wild horses throughout Nevada and Oregon. Ranchers in the area hired them to keep the population manageable. Frank and Jack broke and retained ownership of some while others were sold off to cattle ranchers. Jack even taught himself how to fly a small airplane to make this job easier, however after a few close calls and untimely wrecks, Jack ended his short flying career and went back to the saddle!

In 1951 he joined the United State Army and after basic training elected to ship out to Korea for three years in the tanks. He then served as a lineman on the Demilitarized Zone.

In 1953, he came to Montana and started working for the White Tail Ranch and Tom Edward. Tom took huge parties of people into the mountains. For entertainment he would sometimes have his wrangles tell their life stories to the guests. Jack was very uncomfortable doing this sort of thing but over time he learned that the people loved to hear the cowboy tales and eventually he enjoyed telling them. This became the key to his success in later years, beyond being an astounding cowboy.

Jack was also involved in the rodeo circuit. In 1955, he won first place in Saddle Bronc riding at the Calgary Stampede, Nevada State Championship and Toppenish, Washington. He had many winning rides over the years that earned him several trophies and cherished belt buckles. While running wild horses in 1956, he lost the trophy belt buckle from his winning ride at Toppenish in a helluva wreck with a rank horse he had roped out in the Nevada desert. Fifty-six years later that buckle was found and miraculously returned to him. Just one of the remarkable stories of his incredibly colorful life.

In the mid-1950s he met Marilyn Mercedo, a strong-willed woman who also loved the horses and could hold her own with the rough cowboys at the camps. She cooked for them and took care of the orphaned colts that came in. Jack and Marilyn married in 1959 and headed up to Oregon to open an outfitting business. They bought a rundown little place with nineteen head of worn out horses and mules at Wallowa Lake, near Joseph, Oregon. Within a short six years they had a booming business called the Eagle Cap Pack Station, with over 260 head of stock. This is rugged country where they hosted day rides, pack trips and hunting trips. Jack also did an immeasurable amount of packing for the Forest Service during this time hauling supplies into their various camps and trail crews. Jack and Marilyn sold the outfit and moved back to Montana in 1969 and bought the White Tail Ranch from Tom Edwards. With two quarter horse stallions they raised the majority of their guest stock, trained and used them for their outfitting business.

Marilyn was in a car accident resulting in her death in 1972. Later that year Jack was remarried to Karen Geary. They have spent close to 50 years running the White Tail Ranch side by side.

At age 46 and 47 Jack participated in the Alaskan Iditarod Sled Dog Race, racing 1049 miles solo. He placed nineteenth in 1976 and then ninth position in 1977.

The White Tail Ranch was a huge operation with over 1700 use-days to bring guests to every inch of the Bob Marshall Wilderness. It was the largest roving outfitting business in the Bob Marshall, with over one hundred head of horses and mules. Pack trips would last 12 days, moving nearly every day to a new camp. Horses and mules let loose each night to graze, wrangled in each morning. Summers schedules were filled with pack trips and in the fall big game hunts. It is an incredible feat of knowledge and organization to have successfully maintained this operation for so many years. Thousands of guests, many of whom returned year after year, came to ride through the mountains with Jack. They listened and learned from this legendary man as he told incredible stories of rodeos, wild mustangs, bears, hunting adventures and the Iditarod. Time has passed now, but the stories will live on in the hearts and minds of the guests and friends who have known him all their lives.

Even in retirement; after selling the outfitting business Jack continued training horses and people with horses. In 2006, at 76 years young, a friend asked Jack if he would train some horses. His friend had purchased ten Halflingers, a breed Jack had never worked with before. In doing so, Jack fell in love with the breed characterized as a hardy mountain horse, easy keepers, incredibly strong hooves and wonderful personalities. They are gentle and smart and love people. Over the years, Jack took trips back East to buy Halflingers, brought them home, trained, and sold them.

In the fall of 2021 Jack rode into Smokes Bridge at the North Fork of the Blackfoot River in the Bob Marshal Wilderness, a trip he has taken thousands of times, and at 90 years old, he sat tall and proud, happy to be in the saddle. Jack is a true cowboy whose legend will be “packed” on the backs of every animal that cuts a trail through the wilderness of Montana.