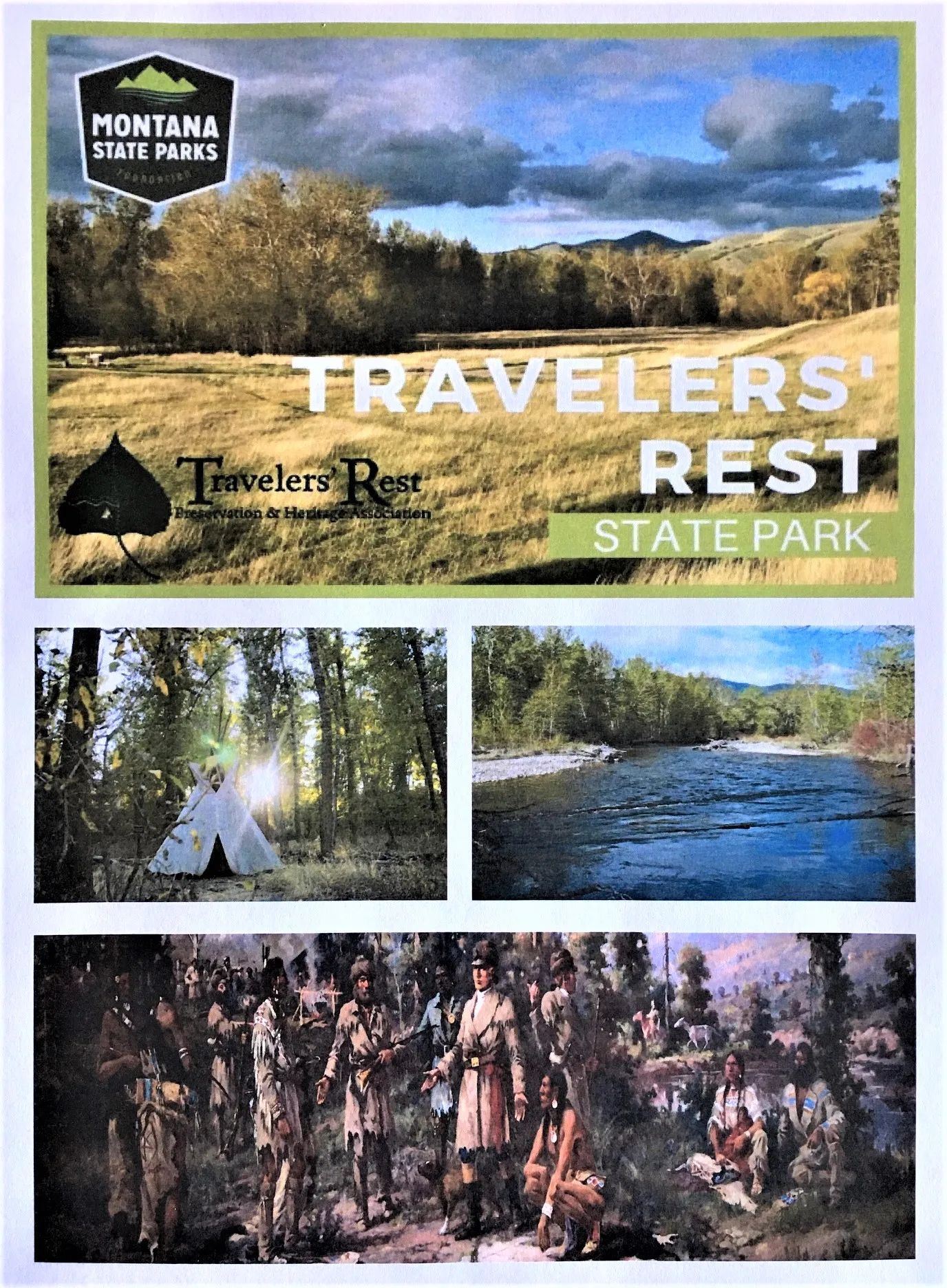 Travelers Rest State Park provides the unique opportunity for a significant cultural heritage experience in a natural setting. With the only archaeologically verified campsite of the Lewis and Clark Expedition in the nation, Travelers Rest has walking trails that lead visitors around the site, offering a chance to reflect on their momentous journey. Centuries before Lewis and Clark, this site has long been known and used by indigenous people, notably the Bitterroot Salish - Selis’. Travelers Rest acknowledges that significance and offers opportunities to learn from and about the Bitterroot Salish, Pend d’Oreille, and Nez Perce people. Travelers Rest State Park provides the local community a place to recreate, observe wildlife, and connect with their heritage. Winter story programs featuring indigenous speakers are a big draw.

The original name “Travellers Rest” came from Meriwether Lewis on Sept. 9, 1805. “we called this Creek , it is about 20 yards wide a fine bould clear runing stream.” Today it is known as Lolo Creek. Led there by their Shoshone guides, Old Toby and son, the 33 Corps of Discovery walked north along the Clark’s River, known today as the Bitterroot River, with 45 ponies. Their pack animals had been provided by both the Shoshone and Salish people at a time when the explorers were most vulnerable. They were already encountering early snow. The party of 35 were carrying several thousand pounds of supplies over the Rocky Mountains in hopes to beat winter and reach the western sea. Game was scarce. Colts in the herd were being held in reserve for emergency food. This place reminded Captain Lewis of a South Carolina trailhead he had visited as a youth. Similarly it was near a gap in the mountains bearing the same name.

It was here, those Spanish Barb ponies provided by native peoples made the difference between the success and failure of the expedition. The Shoshone, Salish, and Nez Perce all played a part in guiding and saving the Corps. The explorers turned west here to a gap in the mountains and onto the tributaries of the Columbia waters. This was a well-used gathering place. Native peoples had been camping here for thousands of years. It served as a travel hub for bison hunts to the east, salmon fishing to the west, and horse trade to the south. The Bitterroot Salish call this tributary Tum-sum-lech translated as No Salmon. The Nez Perce people from the west side of the Rockies commonly used this as a stopover. The campsite shows up prominently on several of Clark’s maps and became a strategic point for future travelers. The Captains recognized this location as a focal point in Western geography and intertribal politics. By 1841, William Clark named this place “Horse Valley” which came to be called the Bitterroot. The first Jesuit missionaries came here to teach the Salish about the white man’s religion, reading, and writing. Early pioneers soon followed to establish this place as the cradle of Montana agriculture.

Travelers Rest was first established as a National Historic Landmark (NHL) in 1960 because of its important decision point for the Lewis and Clark Expedition leaders. In 1976, a geographic boundary was created for 700 acres of private land to recognize the campsite at the confluence of the Bitterroot River and Lolo Creek about 1 ½ miles east of the current state park. After in-depth study of the Expeditions journals, members of the local Travelers Rest Chapter of the Lewis and Clark Trail Heritage Foundation believed that the physical campsite was located elsewhere. Beginning with a report developed by Robert Bergantino, a lifelong student of the expedition, the true location of the site was revealed. The initial finding of a pewter button hinted at the true area. In 2001, the local Chapter hired archaeologist Dan Hall to study the campsite. The following year his archaeological findings indicated that the campsite was located 1 ½ miles west of the Bitterroot River. A magnetometer survey of the landscape discovered a campsite layout used by the military in those times. Within the campsite area, a latrine with mercury was found on the eastern edge of the camp. Some of the men of the Expedition were being treated with an extremely effective mercury pill laxative, affectionately called “Dr. Rush’s Thunderclappers” by the men. Three fire hearths with large fire cracked rock and charcoal, a blue trade bead, and a piece of lead were also uncovered. The lead came from bullet mold spills. This particular lead traced back to Olive Hill, Kentucky, a place Meriwether Lewis traveled past in 1803 coming down the Ohio River. Matching the archaeological findings of Hall’s work with the journals of the Expedition, review of the findings by historians, cartographers, archaeologists, and many other scientists, the National Park Service (NPS) accepted the evidence as verification for the true site. The NHL moved the proper park boundary in 2006; the only time in NPS history that a site had ever been moved. As of 2020, Travelers Rest remains the only archaeologically verified campsite of the Lewis and Clark Expedition.

Several private land acquisitions created the 65 acres of today’s park. The original visitor center began in an old farmhouse. Partnerships were created and have always been a part of this place. The Travelers Rest Connection friends group was created and initially was responsible for park operation, site development, funding, and management. Montana State Parks assumed management responsibilities for the park in 2009 and moved the visitor center to a larger facility. The State Parks also established a popular museum for visitors. The Connection remains a vibrant partner responsible for education, interpretive programming, outreach, and fundraising. The park operates with a lean Fish, Wildlife & Parks staff and an incredible group of volunteers including AmeriCorp staff. Travelers Rest has experienced amazing increased visitation recently and plays an important role in education, interpretation, and tourism for west central Montana. Tens of thousands of visitors and thousands of school children come to the park year-round for an authentic outdoor experience which has become a true Montana heritage treasure.