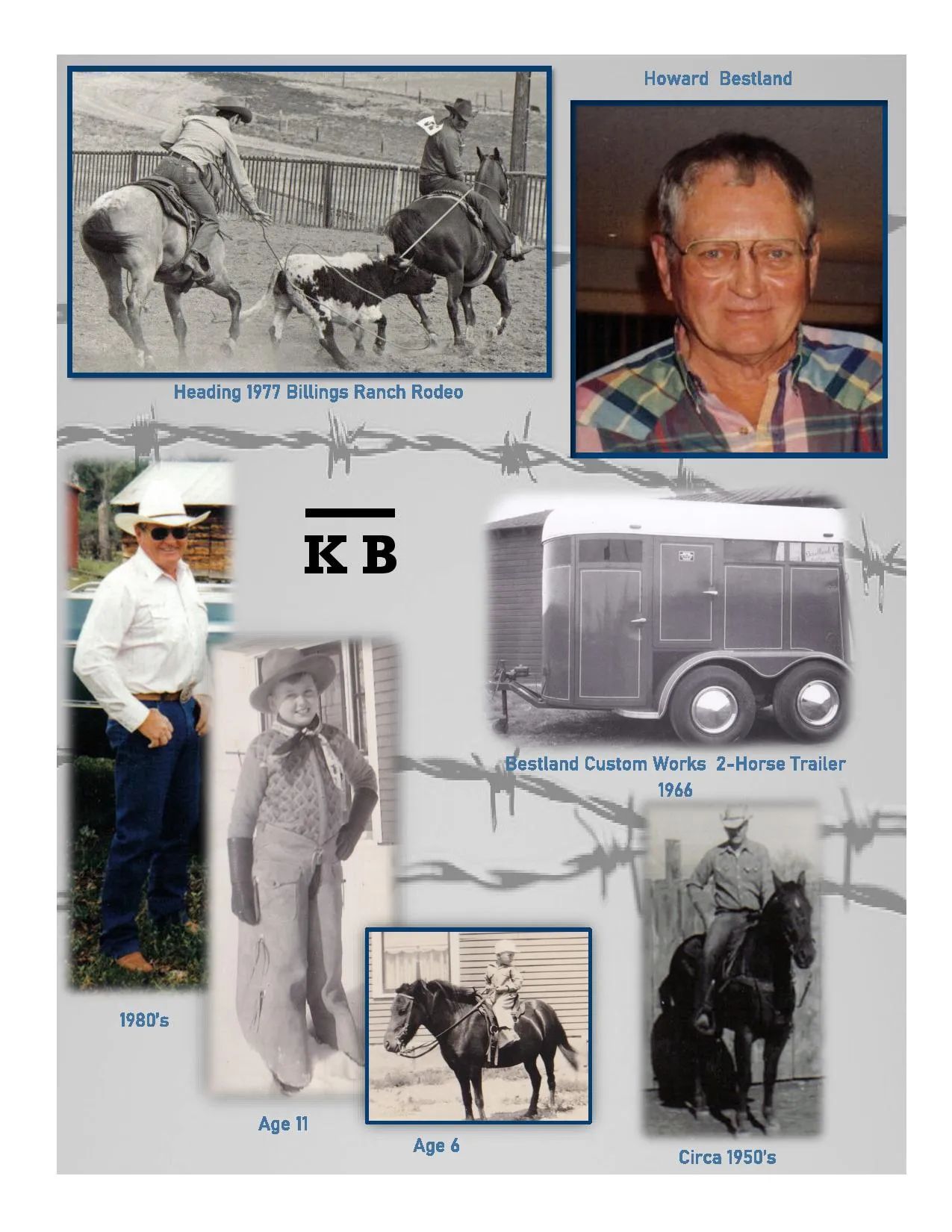 Howard Arnold Bestland was born in Sheridan County, Montana to Halvor and Sara Florin-Bestland on September 13, 1927. Raised on the family homestead eleven miles northeast of Antelope, his grand-father Aanund, father, uncles Andrew, Jergen, Knute Bestland along with Pete Florin farmed and raised livestock. At the young age of four, he assisted with the teams of mules and horses during fall grain threshing, harnessing and hanging feed bags. From then on whatever the job or age, you could find him with the cattle and horses.

After two years of high school Howard was required full time on the homeplace when World War II took his uncles overseas. Halvor and Howard partnered to work the fields and tend to the livestock. Self-taught, he could be found ground working yearling colts and constantly had a lariat in hand with a piggin’ string looped under his belt. When Howard took the time to relax, he played steel guitar in a local western band, The Midnight Ramblers.

He became a calf roper which provided him a doorway to a lifetime of rodeo, roping and horse shows. With the help of his family, they built an arena complete with chutes and pens. This would become the place he would hone those roping skills on anyone or anything that could run. His daughters were forever with him to give a push to the calves in the chute or tying string on the barrier. Howard and his family agreed these were their most enjoyable times. With horses and tack loaded in a Bestland Custom Works trailer weekends and summers were booked with Little Britches Youth Rodeo, the State Line Club Rodeo, Wolf Point Wild Horse Stampede and with many more competitions in North Dakota and Canada.

Howard was well known for manufacturing single, double-wide and 4-horse custom-made trailers which were special ordered throughout northeast Montana and southern Saskatchewan. He fabricated a portable panel arena complete with pens and chutes. The arena was hauled on a flatbed semi-trailer and assembled on site. It was used for a 1971 rodeo at the Regina Saskatchewan Exhibition Center and other roping and rodeo events.

He bought a mixture of livestock that would liven things up, venturing to Mexico, Texas, and Louisiana to locate the right roping steers and calves. Howard traveled home loaded with dozens of cowboy boots and tack followed by semi loads of fresh rodeo stock. It was quite the experience having Santa Gertrudis, Brahman, Texas Longhorn and Brangus looking out at us from the corrals. Those red cows could really jump, necessitating an additional two feet of height to the corrals. Along with horse training, he found time to sell the western tack, gear, stock waterers and livestock scales.

Howard became member #27 of the Rodeo Cowboy Association in 1945 at the age of seventeen. He was a member of the Hi-Line Roping Club, Sheridan Saddle Club, Montana Quarter Horse and American Quarter Horse Associations (AQHA) and the Cowboys Turtle Association - forerunner of Professional Rodeo, the Montana High School Rodeo, Canadian Cowboys Association and a 4-H Project Leader. For years he organized trail rides, rodeos, roping and youth events.

As a header in steer roping, Howard and his heeling partner placed second out of 97 teams at the 1975 Montana Winter Fair held in Bozeman, Montana. He owned and trained two gelding brothers, that in 1974 stood Grand Champion at halter and were consistent winners at registered jackpot roping events. He and his partner placed first in team roping at the Quarter Horse Show in Belgrade. One gelding earned his Register of Merit for achievements and outstanding performance in team and calf roping. This qualified them for the World Championship Quarter Horse Show in Kentucky and was awarded ninth place.

In 1974, after 46 years on the ranch, Howard and his wife Penny moved to Billings to start Bestland Quarter Horses, a breeding and training resource. Their

home, arena, pens, and barn were set in place. It is here that his talent and knowledge of riding, training and roping were put to work once again.

At most rodeos you could find him behind or up on the chutes, helping young cowboys and cowgirls saddle up, loaning his horses to the out-of-luck header or heeler whose mount was sidelined from injury. He would give support in any way he could, from crow’s nest to cook shack, pulling pickups and trailers out of the mud, disking up the arena, making repairs to corrals and endless work required for the rodeo.

Howard would lend a hand to relatives, neighbors and friends with branding, vaccinating, calving and at times be called upon to assist the local veterinarian. He aided the Brand Inspector, checking vaccination records and brands required to transport livestock across county and state lines.

He was a devoted bookworm of authors Zane Grey, Louis L’Amour, Will James and a history enthusiast on the Plains Indians and Battle of the Little Bighorn. He rode in the 1989 Great Montana Centennial Cattle Drive and rode horse as an extra for the movie ‘Far and Away’ partially filmed in the Billings area.

Howard passed away in Billings on April19, 2007. His ashes were taken home in his favorite pair of cowboy boots, eternally looking over the tranquil waters of his favorite watering hole just north of the homeplace.

His family was passionate about rodeo life, but no one treasured it more than Howard. He loved every minute of his life, except the farming, he didn’t like farming.