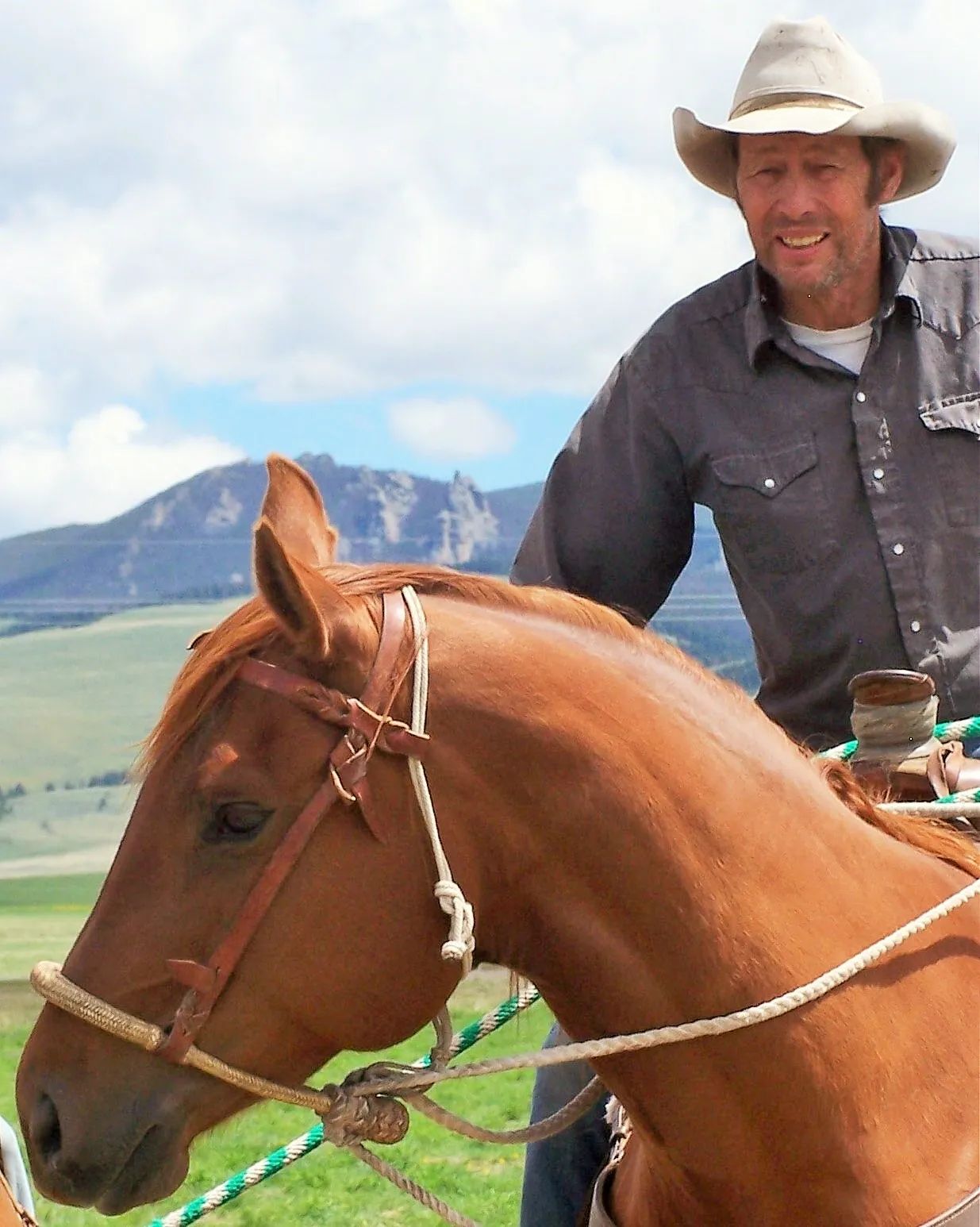 Calvin was born in 1952 at a logging camp in Roseburg, Oregon, the oldest of six children. The family moved to California when he was two, to run cattle and sheep. In addition, his dad drove a milk truck, in order for them to scrape together a living. When Calvin was eight years old, his grandfather gave him a set of rawhide braided reins. Calvin tied a horse up with those cherished reins and when the horse pulled back, the reins broke. The mishap taught Calvin just how valuable that gift was.

Calvin appreciated hand braided rawhide tack as a young man but could not afford to purchase any of the gear. The family worked hard for what little money they earned and it was most certainly applied to need rather than want. Calvin worked on ranches as a teenager and graduated from Sacramento County Farrier School while attending high school. This education helped him to get where he is today.

From Fort Benton to Melstone and all points in between for nearly 45 years, Calvin shoed horses before his health forced his retirement in 2016. He could easily shoe as many as 15 head of horses a day. One week he alone managed 86 head with most of them mules. While shoeing for “Black Mountain Outfitters,” chairs were set up for spectators who gathered to watch Calvin shoe mules and horses.

Calvin has worked on various ranches throughout the West and has also put in time at a feed and pellet mill. He’s hauled hay from Nevada to California and worked construction, both dirt and house building.

When Calvin moved to Montana in 1977, he drove logging trucks down the 33% grade of the Bridger Bowl Ski Area, like he had done it all his life. After the local sawmill burned down, he went back to “cowboying” at the Castle Mountain Ranch in White Sulphur Springs. It was while he was there that he met and married Kathleen Pierce in 1981. In 1993 they bought a small ranch just south of White Sulphur Springs where they still live today, running cattle, horses, chickens, turkeys, bum calves, and once had registered Columbia sheep and hogs. Calvin and Kathy are an ambitious team and enjoy handling life’s daily chores.

The urge to rawhide braid was always eating at Calvin. Full time jobs do not leave much time for one’s passion, but Calvin always managed to turn out a few pieces each year. As a kid he found a book by Bruce Grant titled, “Leather Braiding.” Other than that one book, Calvin is a self-taught braider. Using the trial and error method, as most all cowboys do, Calvin ruined a lot of leather. In the early days he braided latigo leather but soon changed to rawhide because of its strength. His braiding tightness kept breaking the latigo, and, being a perfectionist that he is, he taught himself how to make his own rawhide. At that time there were not many tools available to cut and split the rawhide. So, being Calvin, he handmade and remade his own tools until they worked exactly right. Today, he makes all of his own rawhide, by literally skinning the cow or horse, scraping the hide and dehairing all by hand. He jokingly compares himself to the “Grim Reaper” due to the fact that he is always looking for another dead cow somewhere.

Calvin taught himself how to make bosals, reatas, flat and round reins, headstalls, quirts, hobbles, bolo ties, hat bands, and some jewelry. His favorite is the Bosal, with a minimum of six hours spent on each nose button. Inspired by the Charlie Russell painting of “Bronc to Breakfast,” he creates a “Double Bosal.” He thoroughly enjoys making custom order pieces in which the purchaser designs the size, button pattern and color designs. Each of Calvin’s pieces are made to withstand “Working Cowboy” use as his materials and quality workmanship will hold up to everyday use.

Every piece created is truly a work of art – enough so that he was hired to teach braiding classes at Central Wyoming College in Riverton. Calvin has braid work currently in use around the world or displayed in Western art collections in Canada, France, Australia, New Zealand and several U.S. states. Calvin has won “Best of Show” at the Montana Winter Fair in Bozeman and was an invited guest at both the Elko Cowboy Poetry Gathering and the Art of Cowboy Makers Shows. In the past he has shown his rawhide creations at the Cowboy Christmas in Las Vegas during the Wrangler National Finals Rodeo. Calvin has also exhibited at the “Jay Contway Show” in Great Falls and other cowboy gatherings around Montana.

During the summer months when Calvin was shoeing full time, he found it challenging to keep the rawhide in prime condition for braiding, so decided to start making some spurs. Unlike the rawhide, the iron could sit unattended and picked up at any time whenever time permitted. He has over the years made several sets of spurs, some inlayed with silver. He is once again braiding full time since his forced retirement from shoeing.

The working cowboys as well as the art collectors covet the work of “Calvin Hochstrat, Rawhide Braider.” This braider is a genuine man of the West, authentic to the working cowboy lifestyle and a “Great Montana Cowboy.”