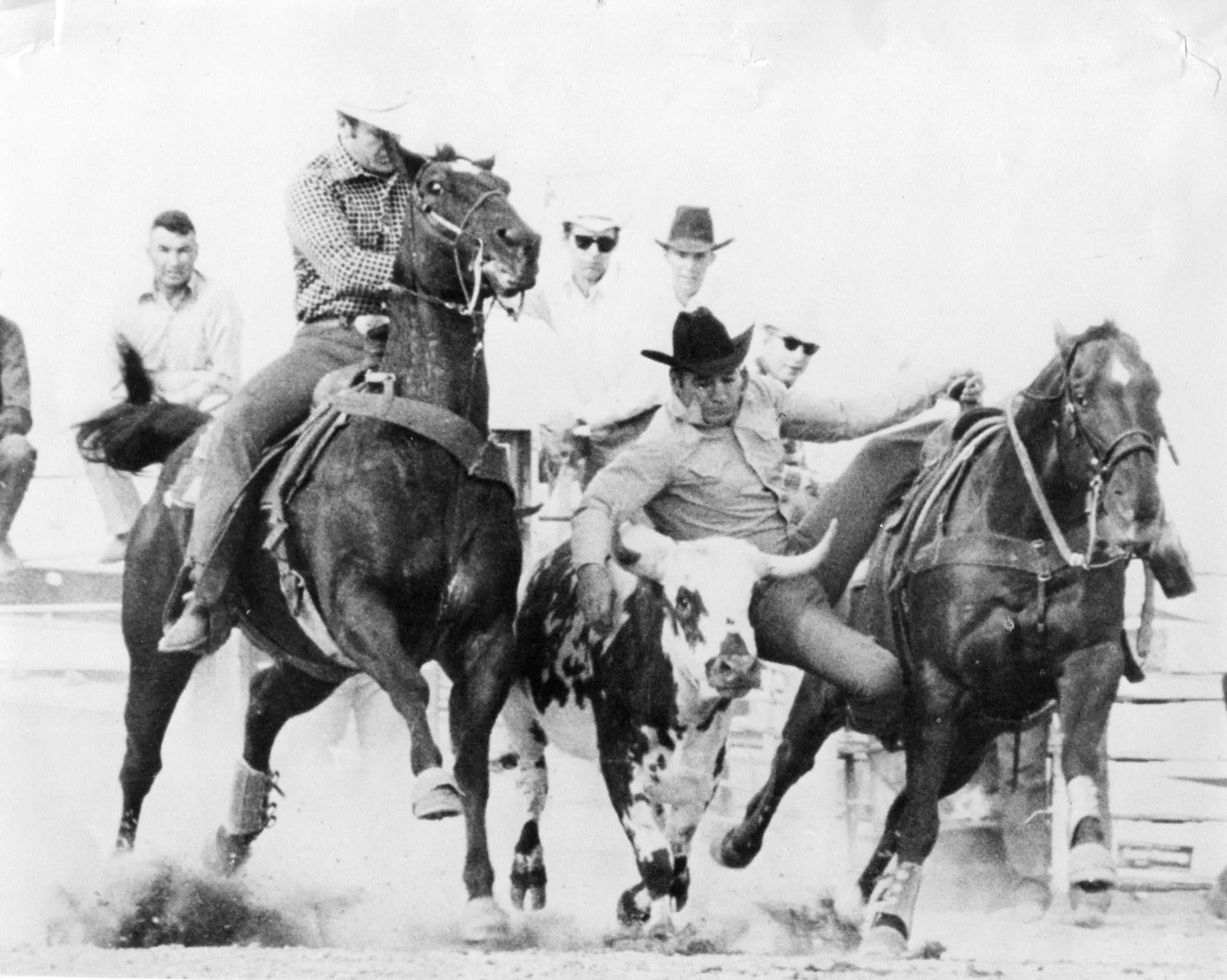 Walter F. Linderman was born March 26, 1936, in Red Lodge, Carbon County, Montana, the son of John and Margaret (Holland) Linderman. He grew up with four brothers and one sister and later graduated from high school in Belfry, Montana.

Scottie was foaled in 1957, in California. He was sired by Franks Quarter Master, out of Sandy Bug, by Hellzapoppin P-1755 and owned by Walter Scott.

Born into a cowboy family, “Walt” worked on area ranches early in life. In 1953, at age 17, he married Dorothy Nauman and to this union a son, Jay, and a daughter ,Vicky, were born.

Walt decided to follow in the rodeo footsteps of his father and uncles, Bill and Bud Linderman. His first competition was at White Sulphur Springs, Montana, where he won the steer wrestling. A place he would later spend twenty years working for the Montana State Highway Department.

For the next ten years, Walt and Scottie’s destinies were successfully entwined. Not only did they advance their own records; they became the ”king makers “ in the world of steer wrestling. Walt qualified for nine National Finals Rodeos (NFR), finishing runner-up in 1966, 1970, and 1971 and third two times. In 1967 he won the NFR Steer Wrestling average.

During this same time period, Scottie, carried Harley May, Jack Roddy, and John W. Jones to four world championships. Six, (five consecutive) National Finals Steer Wrestling titles were won by contestants riding Scottie. Nearly 500 runs were made at the NFR on Scottie and hazed by Walt. There were several years, seven of the top 15 steer wrestler’s chose to ride Scottie.

Scottie’s resume includes carrying Lynn Perry to the National Intercollegiate Steer Wrestling title in 1971 and Troy Yetter to the National High School Steer Wrestling championship in 1977. Scottie was retired that same year and lived out the remainder of his life on the Yetter Ranch in Arvada, Wyoming. He died in 1980 and is buried at the ranch. Scottie was inducted into The Pro Rodeo Hall of Fame in Colorado Springs, Colorado in 2016.

Perhaps, Walt’s lasting legacy is not the championships he won or did not win. He pioneered the concept of steer wrestling schools in which hundreds of steer wrestlers from across the country attended. Most were conducted in Montana, while others were held in the Northwest and on the East Coast. Numerous rodeo championships were won by students who attended these schools. Walt’s teachings advanced the success of NFR qualifiers, Bob Christopherson, Lynn Perry, Ivan Tiegan and Paul Luchsinger.

Walt was inducted into the National Cowboy Hall of Fame and Heritage Center in Oklahoma City, Oklahoma in 2016.

Walt Linderman died on May 25, 2005 and is buried in the local cemetery at Belfry - a place that overlooks the Clarks Fork River.