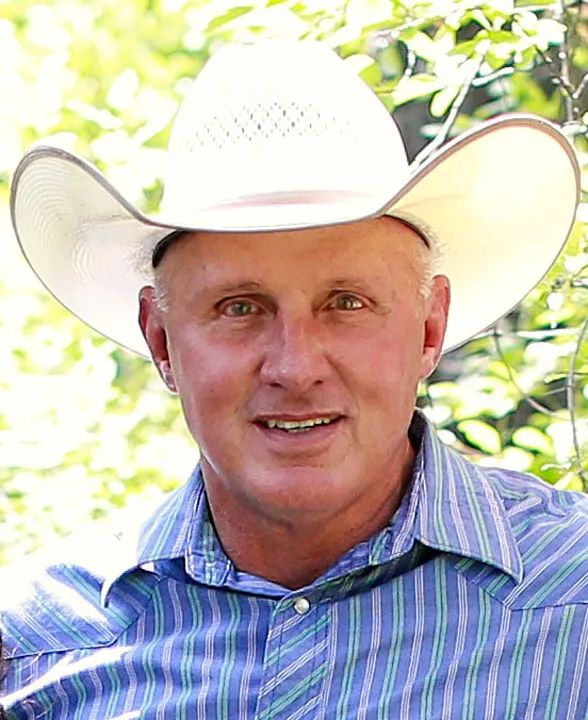 Peter E. “Pete” Olsen was born August 6, 1952, in Helena, Montana, to Paul and Jackie (Williams) Olsen. They moved to Billings shortly after. His family acquired some horses, and, by the age of 12, Pete was working brandings for Jake Frank outside Park City and Max Thornton’s Vale Creek Ranch on Pryor Creek.

Pete attended school in Billings, Montana. He was an accomplished wrestler in junior high through high school. In his sophomore year, he was a cavalry extra in the film Little Big Man. After graduating from Billings Senior High School in 1970, he worked after school and on weekends for Midland Bull Test while attending Eastern Montana College. He fell in love with a piece of property that went up for sale on Canyon Creek near Molt, a place that included an arena, a stall barn, and a shoeing barn. He enrolled in the horseshoeing school at MSU in Bozeman the next quarter and bought the Canyon Creek place at age 19.

The summer of 1972, the McDonald Ranch near Colstrip hired Pete to start over 40 colts and get 100 head of horses ready for sale. While working at the ranch, he discovered an illegally butchered steer, and L.C. Johnson, a district detective for the Montana Department of Livestock (DOL), arrived to investigate. He tried talking Pete into joining the DOL, but Pete was having too much fun cowboying. Soon after, the Gilliland, Ebling, and Cox Ranches located near Birney hired Pete to start a bunch of colts. He ended up spending just over a year there. The Vale Creek Ranch hired Pete in 1974 to ride colts, shoe horses, and doctor yearlings.

Pete married Linda Riley in 1977. The next year, with changes at Vale Creek and a baby on the way, he called L.C. Johnson who set him up working for the DOL. Pete started as a brand inspector in Billings. “We were preached at from the start that we worked for the rancher and the farmer, not the yard company or the order buyers,” he said. He graduated from the Montana Law Enforcement Academy rated as a sharpshooter and became the DOL market supervisor at the Public Auction Yards (PAYS). He continued to ride colts for himself and others, putting horses to work in the yards. In November of 1982, a livestock truck’s rear gate opened in traffic on its way to PAYS, turning a bunch of cattle loose in downtown Billings. A Billings Gazette photo featured Pete horseback dragging one to the trailer in a city park.

In 1992, Pete was named DOL district livestock detective for Park and Gallatin Counties and portions of Madison and Broadwater Counties. He arrested his first cow thief in that district. Starting in 1994, Pete was district detective for Yellowstone and Big Horn Counties. “That district was a stray factory,” according to Pete. It also had more than its fair share of felony cases. The Bureau of Indian Affairs designated Pete a Deputy Special Officer, and he carried an official letter from the Crow Tribe granting him permission to inspect and investigate anywhere within the boundaries of the Crow Reservation. He worked countless cases with the Big Horn County Sheriff’s Department, FBI, and BIA. “I had more theft problems from non-Indians on the reservation,” Pete said. “My years spent working on the Crow and Cheyenne Reservations were my favorite.” Major Montana newspapers reported in 1998 that Pete helped Carbon County Sheriff Al McGill disarm a suspect carrying a .38 pistol and a live grenade. In 2002, he transferred to oversee Carbon, Stillwater, and Sweet Grass Counties. He was also named firearms instructor for all inspectors.

One amusing experience was when he was called to Edgar because thirteen llamas were loose in town chasing kids on their way to school. Kids were found hiding under cars to get away. A deputy hazed for Pete so he could rope the llamas and drag them in the trailer where a highway patrolman removed Pete’s rope. “It was an operation, like dragging calves to the fire,” Pete described with a smile.

The "REAL" Ranch Horse Invitational Sale was established in 2007 to develop a market for genuine ranch horses, and Pete has served on the sale board since its inception. He appreciates horses that are smooth, willing, and cowy, adding, “And the older I get, the smoother they have to be.”

In 2012, Governor Brian Schweitzer presented Pete the Governor’s Award for Excellence for his efforts as a state employee to keep Montana brucellosis-free. In 2015, Pete retired from the Department of Livestock after more than 37 years enforcing Montana livestock laws with a catch rope.

His job took him all across Montana. One day he’d trailer a stolen cow in Willow Creek. Another day he’d gather stolen game-farm elk in White Sulphur Springs. The next week he’d rope a stolen horse on Red Lodge Creek. Ranchers have told Pete he was lucky having that job. While they might enjoy the opportunity to rope when tagging or branding, he was roping something and loading it in the trailer every day of the year. It was all the work that made good horses with none of the worry of ranching.

Pete and Linda raised four kids--Casey, Jesse, Sam, and Rette--on Canyon Creek. In the 1990s, he picked up team roping again when his boys took interest and traveled Montana hazing at high school rodeos. His kids ended up with the top end of his horse string, and he was immensely proud to watch the cowboys they became. “I sure appreciate all the ranchers who invited my family to their brandings over the years. It made good kids and good horses and kept the family close,” Pete recalled.

The Northern Range Ranch Roping Series started in 1999, and Pete caught the ranch roping bug, winning some “fancy loop” and “smooth hand” awards that year. Pete qualified multiple times for the finals where he won the championship with Doyle Parker and J.R. Henderson and placed on three of the top four teams. Pete and Dean Delp won the Lodge Grass horse roping in 2002. In 2018 at 65 years old, Pete won the Big Horn Days horse roping in Hardin with Matt Noyes. Pete’s humble about these moments and maintains his family is his proudest accomplishment.

After a short battle with cancer, Linda passed away in 2019.

Pete keeps busy day-working and branding in the Pryor foothills with close friends. He’s judged some ranch rodeos and sells a horse most years at the "REAL" Ranch Horse sale. He’s always got time to wrestle with grandkids and get them into mischief, and he'll still doctor a bull by himself in the hills. He continues to live on Canyon Creek and each morning thanks the Good Lord for the beautiful day.