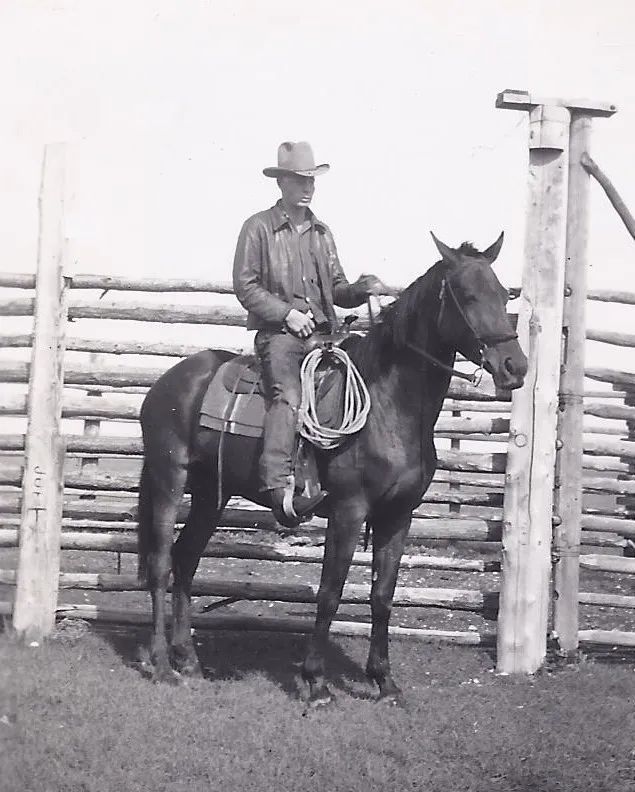 Leland Paul Cade is a living legacy of Montana’s homestead era. The product of drought, depression and perseverance, Leland began life on the short grass prairie north of Lavina in Golden Valley County. In an area which was more suited for grazing than farming Leland learned lessons which stayed with him throughout his life.

Leland story began when his father Joe stepped off the train in Lavina. He had been lured to Montana from Wisconsin by the promise of free land featured in the colorful promotional advertising of the Northern Pacific and Milwaukie Railroads. Optimistic homesteaders believed what they had been told; Montana had fertile soil, abundant rainfall and that anything planted would grow. One of thousands to do so, Joe filed a claim in 1911. His future wife, Helen Tuffley filed in 1914. Each had taken out a 160-acre homestead on what would become known as the Tuffley Bench. Joe and Helen were married in 1918. By the early 1920s drought ravaged the area and was followed by the great depression of the 1930s. By the beginning of World War II most of these homesteaders were gone from the landscape, the victims of drought, depression, broken promises and failed dreams.

Later in life Leland would write, “It took a lifetime of experience for those who stayed to understand the reality of the land and the climate in Montana and to adapt accordingly.”

Leland was born to Joe and Helen in 1925 on the Cade homestead north of Lavina. Born the third of five children Leland joined two brothers and two sisters. A redhead at birth Leland was given the nickname “Red” which stayed with him throughout his life. Those early years were filled with fond memories of life on the farm. Even though they endured blistering summers and artic winters Leland and his family knew no different lifestyle. Like their neighbors, they braved weather that showed extreme more often than average. Leland and his brothers spent one winter in the log bunkhouse adjacent to the main house. Early one morning they awoke and ran to the house for breakfast. Leland vividly recalls the -58 below on the thermometer next to the door.

His first five years of education were at the Twin Coulee School. The Cade children rode horseback on Old Beauty to school, when two or three were going. If four or five children were going, they hooked her to the buggy. Old Beauty was their best friend during those years, and Leland describes the relationship as priceless, beyond what money could buy.

When Leland was eight, he broke his arm, the first of several broken bones in his childhood. The broken arm required a trip to the doctor in Roundup, 35 miles away. The Cades didn’t have a car, so they harnessed a team to the wagon and headed to a neighbor who did. Leland spent a week in the hospital, his first experience with electricity and running water! Years later he recalled what a challenge it was for a kid from a homestead having to learn to use flush toilets with paper on a roll and faucets with hot and cold water.

In order to survive the Cade family worked together and expanded the farm adding adjacent properties as other homesteaders left the area. The houses and buildings of their departed friends and neighbors were moved or dismantled board by board, even the nails were saved to be used later to put them back together. These early lessons in frugality, economy and thriftiness were deeply engrained in Leland.

He graduated from Lavina High School in 1943 and enlisted in the U.S. Army, spending one year in the Infantry Division at Camp Robinson, Arkansas and another year in the horse cavalry at Fort Riley, Kansas. As a farm kid Leland had plenty of experience with horses but this was his first exposure to mules. Leland’s discharge papers list his civilian occupation as “cow puncher” and army job as “horse trainer”.

When Leland was discharged from the Army he returned to Montana. Prior to beginning college, he and his brother Don decided they needed haircuts so using hand clippers they each gave the other a good trim. With only one haircut to his credit Leland bought a set of electric clippers and went into the barber business after he enrolled at Montana State College in Bozeman. Leland recalls the first few haircuts were a bit lopsided when viewed from behind, but the price was right and business was brisk. He graduated from Montana State College in 1950 with a degree in Agriculture. A son of the soil, Leland’s interest lead to a career in the extension service where the next 16 years were spent as an extension agent in Montana and Alaska. In 1952, while working as the county agent in Chouteau County, Leland met Janet Elliott. She was the daughter of a homesteader who had managed to hang on and expand on his original homestead as well. In 1953 Leland and Janet were married in Fort Benton, Montana. Two children, Randall and Valine, were born to this union.

In 1969 Leland went to work for the Farmer-Stockman, a farm-oriented magazine headquartered in Spokane, Washington. Leland spent 18 years as the editor of the Montana Farmer-Stockman located in Billings. During this time, he continued his commitment to education and improving the farm and ranch economy throughout the western states. During his time as editor Leland developed and refined his writing skills. He made numerous lifelong friends and acquaintances during his years with the Farmer-Stockman family.

After retiring in 1987 Leland continued to live in Billings where he began writing and documenting the homestead era. He helped found the Museum of the Northern Great Plains in Fort Benton which began when Leland donated his collection of 250 pieces of farm machinery. The facility has continued to grow, while documenting the last one hundred years of life on the vast plains of Montana.

Besides writing 11 books on a wide range of topics, Leland also found time to build 4,400 dustpans in his Billings shop! These dustpans are of all sizes and colors and began with, “a nice piece of tin I found and thought it was too good to throw away.” The early lessons of frugality Leland learned were so strongly engrained he could not stand to see the tin discarded. All 4,400 dustpans are numbered and built entirely of salvaged materials with the exception of the screws and rivets which Leland purchased.

Leland “Red” Cade is truly a son of Montana, born and raised on that short grass prairie north of Billings, a testament to all that embodies Montana.