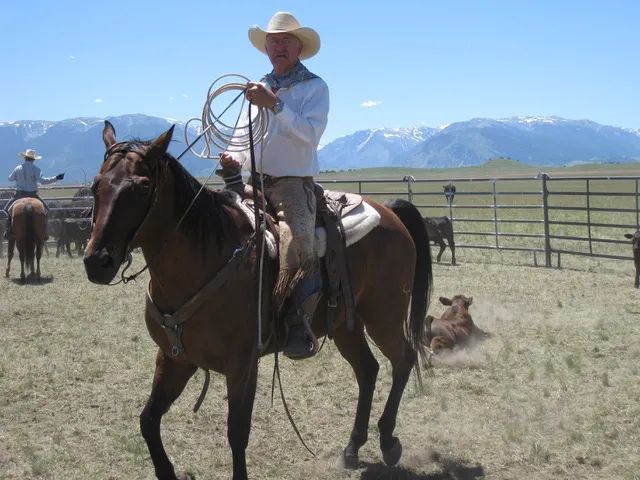 William A. (Bill) Dutton was born on June 10, 1948 in Jordan, Montana, to William G. and Margaret Dutton. He was raised him at the family ranch on the Big Dry Creek west of Jordan. Bill received his elementary education in a one-room schoolhouse, a few miles from home at the Big Dry School. He would rather have spent his days riding and working with his dad and neighbors; even as a child, he had a great love for animals and the outdoors. Bill’s parents recognized this desire and to his good fortune needed his help during lambing season in the spring, thus allowing him to stay out of school on occasion. In the summer he would help the neighbor’s brand and assist with the many other chores that needed done. Bill was instructed by his parents not to take any money in exchange for the work, but Coty Meserve would insist on him receiving two or three silver dollars as wages. It was his first paying job. He secretly hid the money to prevent a scolding and moreover, when recently asked, Bill’s 93 year-old mother emphatically stated she had not known about the money from Coty.

Bill attended high school in Jordan, living in the community dormitory during the week. He was hired on by the LO Bar Cattle Co. owned by the William J. Brown family west of Sand Springs, Montana, to help brand during the summer. He would spend weekends and the remainder of the summers at the Dutton homeplace as they still required his help.

When Bill left high school, he found employment with H.D. Landers at Sand Springs. Harry had colts to break and enough ranch work to keep Bill out of trouble. He learned to cook at the Landers outfit, a skill he would use and perfect for years to come. Bill got really good at baking pies. One time he decided to bake a pie for Harry and himself. As he was taking it outside to cool in the snow, the pie tin crumpled, dropping the whole thing on the kitchen floor. Bill told Harry he had never done such a thing as that before and Harry just laughed saying he was 30 some years old and he hadn’t ever done it either!

After working at Landers’ place, Bill returned to the LO Bar for a year, then spent about six months in Melstone, Montana helping Wade Kincheloe. During that time, he was drafted into the United States Army and served from July of 1967 to July of 1969. He was stationed in Germany with the Third Squadron, Seventh Cavalry, armored division.

When Bill returned to Montana, he went back to work for the LO Bar, an employment that would continue off and on for 31 years. Bill Brown Jr. mentored Bill in the ways of cowboying horseback over those many years. The LO Bar ran a sizeable herd of cattle and all the cow work was done from the back of a horse. This meant there were always plenty of colts to ride and long days in the saddle. Most mornings started with wrangling the remuda, breakfast served before dawn, and the business day starting shortly thereafter. At that time there was one two-horse trailer and a straight truck for hauling horses. Many times, they just galloped to wherever they were gathering or working cattle but if they had to go to distant leases, they trailed the horses there. Good fence repair was a must! One brutally cold winter day Bill Brown Jr. and Bill were riding out and Bill said to Jr., “I guess I should have gone and got a college education.” Bill Jr. quipped, “Well, I’ve got a college education and I’m doing the same thing you are!” The lasting friendship was forged with many such times spent together in the saddle as well as the friendships with the cowboys that came to work at the LO.

In 1970 Bill married Donna Mosby and soon thereafter started their family. Two daughters and one son completed this union – Mary, Jennifer and Barry. They lived at the Dutton family ranch on the Big Dry for several years, moved with Bill back to the LO Bar for a couple of years, and finally returned to take over the ranching operation of the home place. By then the sheep had been sold and Bill purchased his father’s cattle.

Somehow during the busy years of ranching, Bill found a way to serve his community. He was a trustee for the District 10 Big Dry School Board, and also the Garfield County High School Board. He is a member of the Veterans of Foreign Wars (VFW), having served as Commander for several terms. As a VFW member, he helped produce the annual Jordan VFW Rodeo in the fall and carried the American flag with honor on the 4th of July parade for a memorable 14 years.

Ranching in the 1980s took grit and determination due to the drought across most of Montana. To support his family and ranching operation, Bill took a job with J.D. Murnion & Sons Trucking hauling grain and livestock. Eventually Bill bought his own semi and trucked off and on for nearly ten years as Dutton Trucking.

Bill and Donna divorced in the early 1990’s and he continued ranching on the Big Dry and driving truck part time. In 2001 Bill and Karen (Curran) Murnion were married and he gained three more children, B.J., Meghan, and Cari. Bill’s “kids” and grandkids are a great joy in his life. As soon as each of them was able to be horseback, he would have them in the saddle and take them riding. When he could, he made sure he was the one to buy their first cowboy boots.

In 2002, Bill began working as a ranch manager for David Leuchen of Switchback Ranch, LLC, of Roscoe, Montana, on the land Switchback leased in Garfield County. Bill managed approximately 1000 head of cattle for the Switchback for 15 years. During this time, he sold the herd of Angus cattle he had built over the years to the Switchback Ranch and leased them grazing land as well. Bill now manages a smaller cow-calf operation for the Switchback near Jordan and runs a few cows of his own.

It was important to Bill to be a loyal employee to all he worked for and a friend to the people in his life. One of his favored sayings has always been “ride for the brand.” Cowboying is and always has been an important part of his life and the legacy he someday wishes to leave to his family.