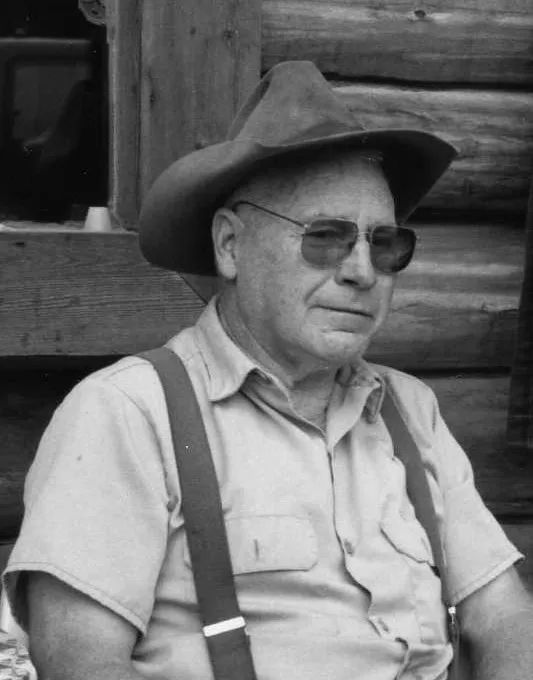 Leonard Moore was born on May 29, 1926 near Pablo, Montana in Lake County at the old ranch where Michel Pablo raised the buffalo later sold to the Canadian government. He grew up learning to wrangle horses at an early age, as his parents, George and Fern (Minster) Moore ran an outfitting and guide business (nearly 60 years) in Glacier National Park and the South Fork of the Flathead River, the present-day Bob Marshall Wilderness.

A true Montana cowboy, Leonard took his first pack trip into the South Fork before he learned to walk. While riding on the trail as an infant, Leonard hitched a ride with his mother on her saddle and occasionally rode in the pannier of the lead horse in the pack string.

Between the 1920s and mid-1960s George Moore based his operations out of Montana’s Lion Creek, Holland Lake, and the Gordon Ranch in the Swan Valley; the Double Arrow Ranch near Seeley Lake; and the Two Creek Ranch near Ovando. He set up camps on the South Fork of the Flathead River, Gordon Creek, Bartlett Creek and Hahn Creek – all in today’s Bob Marshall Wilderness.

Leonard spent his youth and later every hunting season helping guide hunters and fishermen into the backcountry. He knew the south end of the Bob Marshall backwards and forwards, leading clients up and down drainages in search of trophy elk. An accomplished fly fisherman, he caught his share of trout as well.

The first backcountry trip Leonard remembered was in the fall of 1933. “We’d see bunches of 35 or 40 head of elk,” he said. As a ten-year-old, three years later, he recalled shooting an elk near the mouth of Bartlett Creek.

One year, Leonard shot a six-point bull elk in the wilderness on Gordon Mountain. When he came back the next day to pack it out, a family of six grizzlies had already laid claim to the elk. Leonard recalled peering over a ledge and watching the grizzlies in action. “. . . there wasn’t nothing left but the bones and the horns,” Leonard remarked.

In 1938, at the tender age of 12, Leonard competed in the Helmville Rodeo. Like many wranglers at the time, Leonard rode saddle broncs. He mostly competed locally, including the one-and-only rodeo at the Double Arrow Ranch near Seeley Lake (owned by his parents at the time). He made it all the way to the Calgary Stampede where he got bucked off and then competed in his last rodeo in 1941 at the Pendleton Round-Up in Oregon. Leonard remembered the event well and remarked, “I don’t think they’ve got the hole filled yet where I got bucked off.”

In 1939, at the age 13, he and his eight-year-old brother and his uncle, age 12, rounded up 300 head of pack stock from the winter range near Stevensville and delivered them to Ovando and Holland Lake, driving the stock right through downtown Missoula. Many years later, Leonard wrote a poem titled, “Spring Horse Drive” to commemorate the event.

At the end of the1940 hunting season, when Leonard’s parents headed down the trail with the last of the hunters for the year, Leonard stayed behind to break down the camp, pack the gear, and load it on their pack string. On the morning of November 20, with the snow steadily falling, 14-year-old Leonard brought the pack string from Gordon Creek to the trailhead at Holland Lake. He had to travel over 29 miles, with the Gordon Pass presenting a formidable challenge. Approaching the pass, he saw the hump of a grizzly on the trail visible though the swirling snow. The snowpack was too deep to lead the pack string off the trail so Leonard hollered at the approaching bear, pulled his rifle from its scabbard and shot in the air. The advancing bear kept coming down the trail and with no other choice, he shot the grizzly. With the snow still falling it was 10 PM when he reached the corral at Holland Lake Lodge - the thermometer on the barn registered 40 degrees below zero. “I thought for sure Mr. Bear had me . . . It was a different time. Kids don’t do that now,” Leonard remarked.

As a young man Leonard had tried to enlist in the military during World War II, but was unsuccessful. “Every time I got to the induction center; I had a cast on somewhere. Finally, they told me to stay home and raise beef,” Leonard quipped.

Leonard married his teenage sweetheart, Ethel Minster in 1943. They spent the first summer of married life in the Bob Marshall. Leonard secured a government contract to pack in a geological survey crew and Ethel was hired as camp cook.

Leonard worked for the Forest Service at the horse ranch in Perma where he broke horses and mules. Part of his job was to take horses from Perma to ranger stations throughout western Montana. In 1948 and ’49 he worked two summers as a packer at Big Prairie, also in the Bob Marshall Wilderness.

No matter where Leonard was employed, he’d go back to guiding for his folks every fall. During the lean years, he broke horses during the winter months. “I got ten dollars a head for putting a rein on them,” he said.

When their four daughters were small, Leonard and Ethel raised dairy cattle on his grandparent’s ranch in Pablo. At one time, they were milking 120 cows.

Eventually, Leonard found himself working in the timber industry. One day as he drove up to the job site a sawyer dropped a tree across his truck, crushing the cab and almost severing his hands. His logging days were over. He attended Forestry School in Missoula and was later hired by the U.S. Forest Service. In the 1970s and 80s he worked in Condon, Montana and later in Idaho, where he became an accomplished timber cruiser.

When Leonard retired in 1988, he moved back to his log home in Condon where he continued to ride and wrangle horses. Through his cowboy poetry, Leonard shared the stories of bygone days of outfitting, packing, and hunting published two books Cowboy Chatter and Moore Cowboy Chatter.

Leonard moved to Stevensville to live with his granddaughter a few years ago and was still making tracks when he passed away on June 6, 2020 at the age of 94.