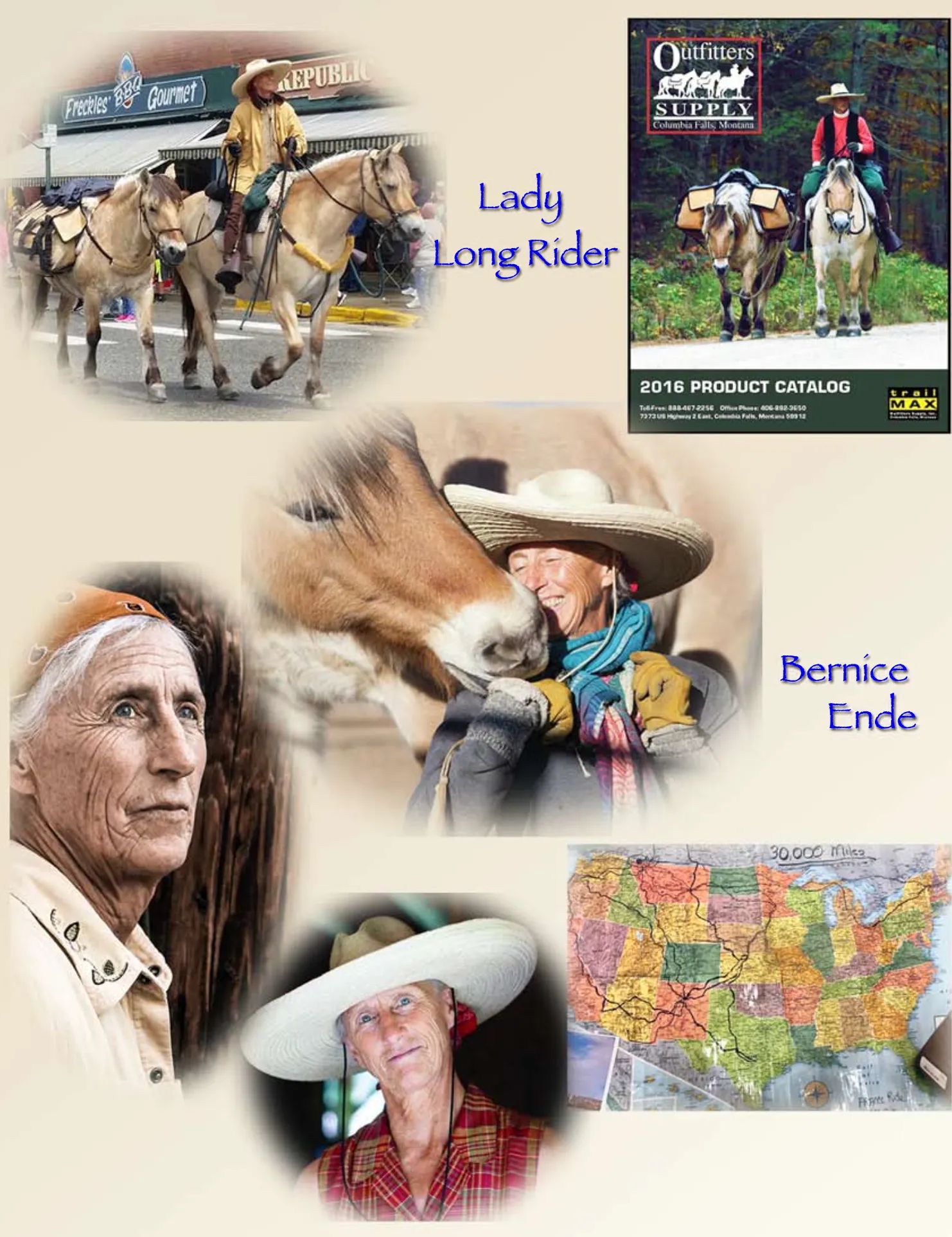 Bernice Arlene Ende, also known as Lady Long Rider, is the personification of the pioneer spirit. Born in Minnesota, November 16, 1954, Bernice was raised on a hard scrabble dairy farm along with five other siblings. Bernice was riding horses by the age of three, though if you ask, she will tell you she was riding before she was born, as her mother rode also.

Bernice has not always been a long rider. She taught classical ballet for twenty-five years. Blessed – or cursed—with a nomadic spirit she taught in Portland, San Francisco, Minneapolis, Seattle, and lastly Trego, Montana, where the dance studio was equipped with a wood stove and an outhouse. Families who could not afford to pay for lessons would supply firewood and start a fire in the stove prior to lessons.

Bernice also studied and taught dressage and considered that art form to be a form of ‘horse ballet’. But she never gave up her time on horseback, often working with and training horses for others. While she was working with a couple of thoroughbreds, having reached a mountaintop with a view, she thought she would like to ride to New Mexico to visit her sister.

Up to this time, she was aware of long-riding, but never thought of it as something she would like to do. But now she was dealing with the fallout of a relationship that was not going anywhere and decided to ‘wash that man right out of her hair’ … figuratively and literally. The stress of the breakup resulted in alopecia, a severe hair loss condition, from which Bernice has never recovered. She wears a bandanna much of the time as a result.

At any rate, she now had the fever to take on her next challenge. She plotted her routes, worked out the logistics as best she could and after five months, set off for New Mexico. The year was 2005, and it soon became clear that five months of planning was not near long enough , and it turned out to be a study in how not to long-ride. Around the half-way point, Bernice hit a wall. Angels in disguise came along, picked her up, gave her a place to regroup, took care of her horse and rescue dog, Claire, then sent her on her way. She made it to New Mexico, nearly 2000 miles away, twice the distance required to qualify as a long rider. Before she got to her sister’s, she was planning her next ride. Bernice says she got her ‘love of the horizon’ from her mother and her ‘can-do’ attitude from her father. She also credits her mother and grandmother -- both independent women and drawn to Montana from Minnesota – with being drawn to Montana herself.

Bernice slept with her trail companions, Claire and her horse. Later, she had two horses, because after 7000 miles leading the way on foot, (paws-protected by leather booties made by Bernice), Bernice felt that Claire Dog deserved a horse of her own, and from then on, she rode in her own special box on horseback.

Depending on the disposition of the horse, Bernice would either sleep with the reins firmly wrapped around her wrist or she would picket her horses. She would lie down on a tarp with her packs on either side of her, Claire snuggled up for extra warmth and the rest of the tarp was thrown over the top. After the first few rides, in inclement weather, a tent was used. No point in getting too comfortable. A small propane stove supplied hot water for tea and oatmeal. She supplemented store-bought supplies with dandelion greens, lamb’s quarter, nettles and watercress.

One of Bernice’s most harrowing experiences took place on her second ride—a 5,000-mile long trip taking her through the Midwest, down through the Southwest, up the West Coast states and back to Montana.

Coming home from a 6,000-mile long-ride, Bernice found herself in Eastern Montana, in October. She still had 600 miles to go to get home with a pass to negotiate. She knew she would not be able to cross the Rockies before winter set in. Bernice travels on a shoe-string so her best option was to ride out winter in her tent. Fortunately, she knew someone who would loan her the use of his barn and this helped to keep Montana’s winds at bay. It was a long, tough winter but with the occasional home-cooked meal, and visits from friends, she made it through.

Her longest ride—so far—has been from Trego to the coast of Maine, back to the west coast, and then home to Trego, an 8,000-mile trip, taking two and a half years. In all, Bernice has ridden over 30,000 miles. Somewhere around the 25,000 mile point, Bernice felt she actually now qualified as a long-rider. By this time, Bernice had become her own farrier and had switched to titanium horseshoes to get more mileage from them.

Her publisher, Far Country Press, has this to say about Bernice: “As of spring 2019 and now in her mid-60s, Bernice Ende has ridden more than 30,000 miles solo on horseback around the United States and Canada… The Long Riders’ Guild has recognized Ende as an outstanding ambassador for long-distance exploration on horseback—no other living woman has done as many journeys or ridden as many miles as Ende.” The president of the International Long Rider’s Guild, responding to a reporter, said: “[Bernice’s current ride] is of historical significance….riding ocean to ocean across…America is incredibly difficult on a logistical, emotional, and physical level. Few have [made this journey] between two oceans in either direction. No one has…attempted to ride ocean to ocean in both directions in one journey!”

At the end of her rides, Bernice can be found at her rustic, but charming, cabin.

She embodies the pioneer, can-do spirit characteristic of those who have created our great state. Bernice has put Montana on the map from astride her horses.