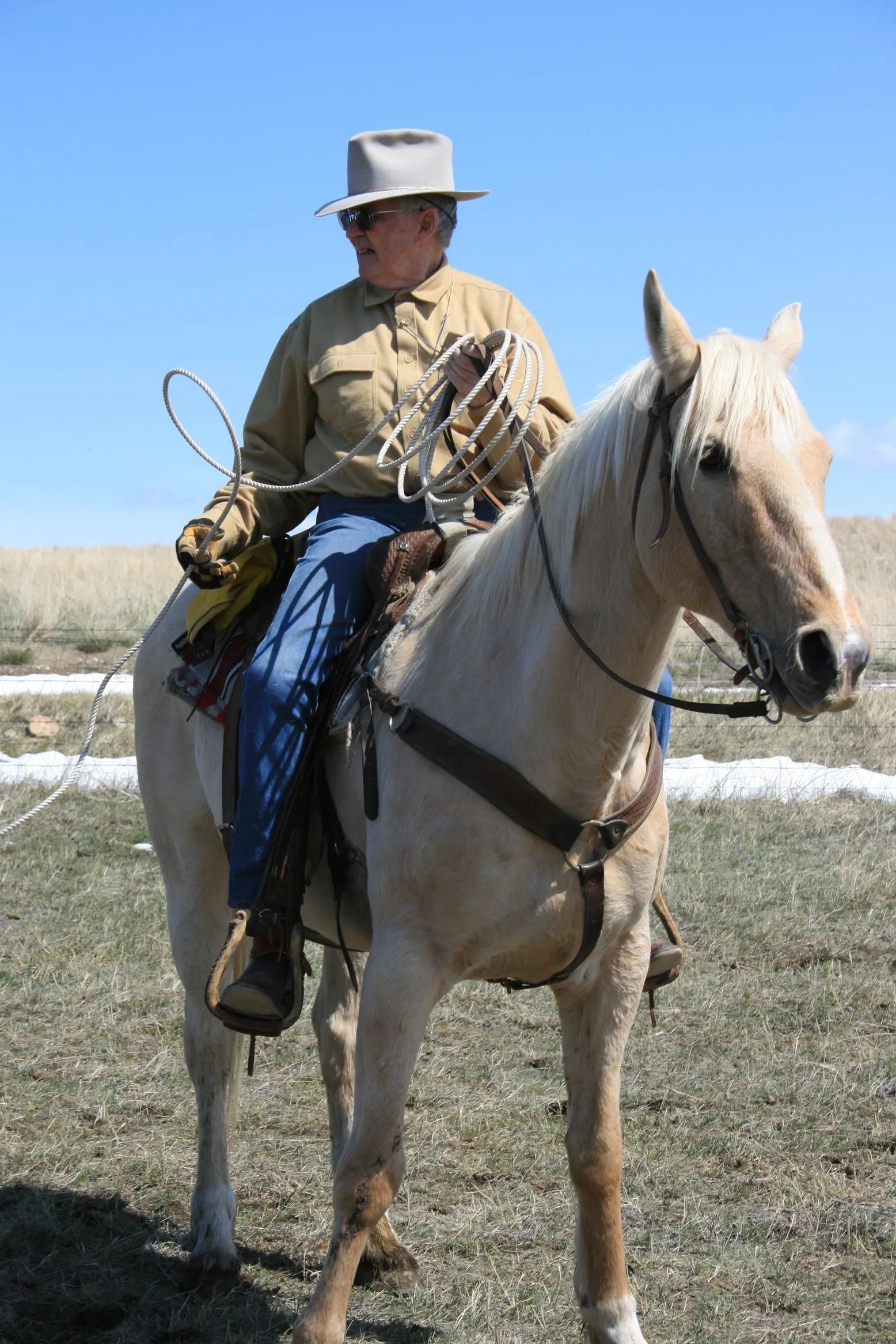 James Eugene “Jim” Carrig was born the son of a nurse, named Maxine, in 1930. He grew up spending his summers on ranches around Whitehall and the Big Hole in southwestern Montana, going to school in Butte.

Horses piqued his interest at an early age, and it wasn’t long before he and the McKeown brothers were hunting anything with four legs to test their prowess. Lucky for Jim, there was a community horse pasture, near Butte, full of many prospects for he and his buddy Sam to buck out. There are numerous stories from this venture, many of which taught some hard learned lessons. One such, was the fact that an old wash basin bolted to a sawn off saddle tree does not make for an effective pilot seat.

Work was a way of life from day one. While in grade school he worked at the bowling alley setting up pins. During high school he delivered mail during Christmas break, and in the fall would work at the stockyards unloading transit stock or loads of baled hay which he swears were purposely left for the kids. Jim often didn’t get home until midnight. At 14 he was driving a team putting up hay in the Big Hole.

Jim’s knowledge and passion for grass and livestock production led him and his young family from Challis, Idaho to Buffalo, South Dakota and points in between managing ranches. He never lacked for work. Sometimes it was starting polo colts for the Sun Ranch of Cameron, Montana. Then onto Ekalaka, engineering conservation practices for the Soil Conservation Service (SCS). From 1957 – ’59 he inventoried resources for the Bureau of Indian Affairs on the Wind River Reservation in Wyoming.

Jim, his wife June, and their five children Kathy, Molly, Kevin, Erin, & Shawn lived in some amazing places over the years. The 60,000 acre Norris Ranch in Buffalo, challenged him from 1959-63 before he took a job planning, mapping, and inventorying the 12 ranches owned by Western Cattle Co. for eventual sale.

After another stint with the SCS engaged in farm and ranch planning on the Hi-line, Jim found the place they would call home. It was here on the historic N Bar near Grass Range, Montana that they spent the next 11 years. The Elliot family, who owned the N Bar at the time, was in their heyday with the registered Angus business. Jim was at the helm of this 1200 head cow calf outfit when they produced the breed-shaping bull, you may have heard of, Emulation 31.

In 1979, Jim became the Farm Coordinator for the Animal & Range Sciences Department at Montana State University (MSU) where he stayed for seven years, sharing an office in the livestock pavilion with an old yellow tom-cat named Peggy. Jim very much enjoyed those MSU days and the interaction with the students. The school would eventually incorporate into their Ag program a range management and record keeping system that Jim had worked up in his earlier days.

Jim had a knack with high-profile people and places he worked for. His candor and no nonsense view of the world made it easy for folks to trust him. The N Bar, the Beartooth Polled Hereford Ranch of Absorokee (later owned by Mel Gibson), the K-M Ranch of Greenough (today known as Paws Up), and the Snowcrest Ranch of Alder, Montana, owned by the VonTrapp family (yep- The Sound of Music!), now owned by Ted Turner were places he enjoyed. He also spent time working and consulting for the Padlock Ranch in Montana and Wyoming in the ‘90s.

After ‘retirement’ he would spend many years hauling his beloved horse ‘Swede’ around to ranches helping with calving, doctoring yearlings, and lending a hand on his children’s ranches doing what he truly loved. He was a pioneer in the AIing industry, starting in 1961, and it’s just been the last few years that he has declined putting on an AI sleeve when offered.

Many will know and remember Jim for his artistic skills. He is a talented sculptor and sketch artist, but being the extremely humble sort that he is, never really let anyone outside the family enjoy it. His leather work, on the other hand, was and is truly stunning. It would be a great undertaking to try and figure how many folks are wearing his belts, paying bills out of his checkbook covers, carrying his purses, displaying photo albums, playing dice with his cups, or cowboying in his saddles. He stays busy in the leather shop when he isn’t out checking on his five children, 12 grandchildren, and 22 great-grandchildren.

You can still find Jim in the 8-sided log house he built for June in 1988-89 located between Bozeman and Belgrade, although there’s a lot more people in the neighborhood than there was when he built it.