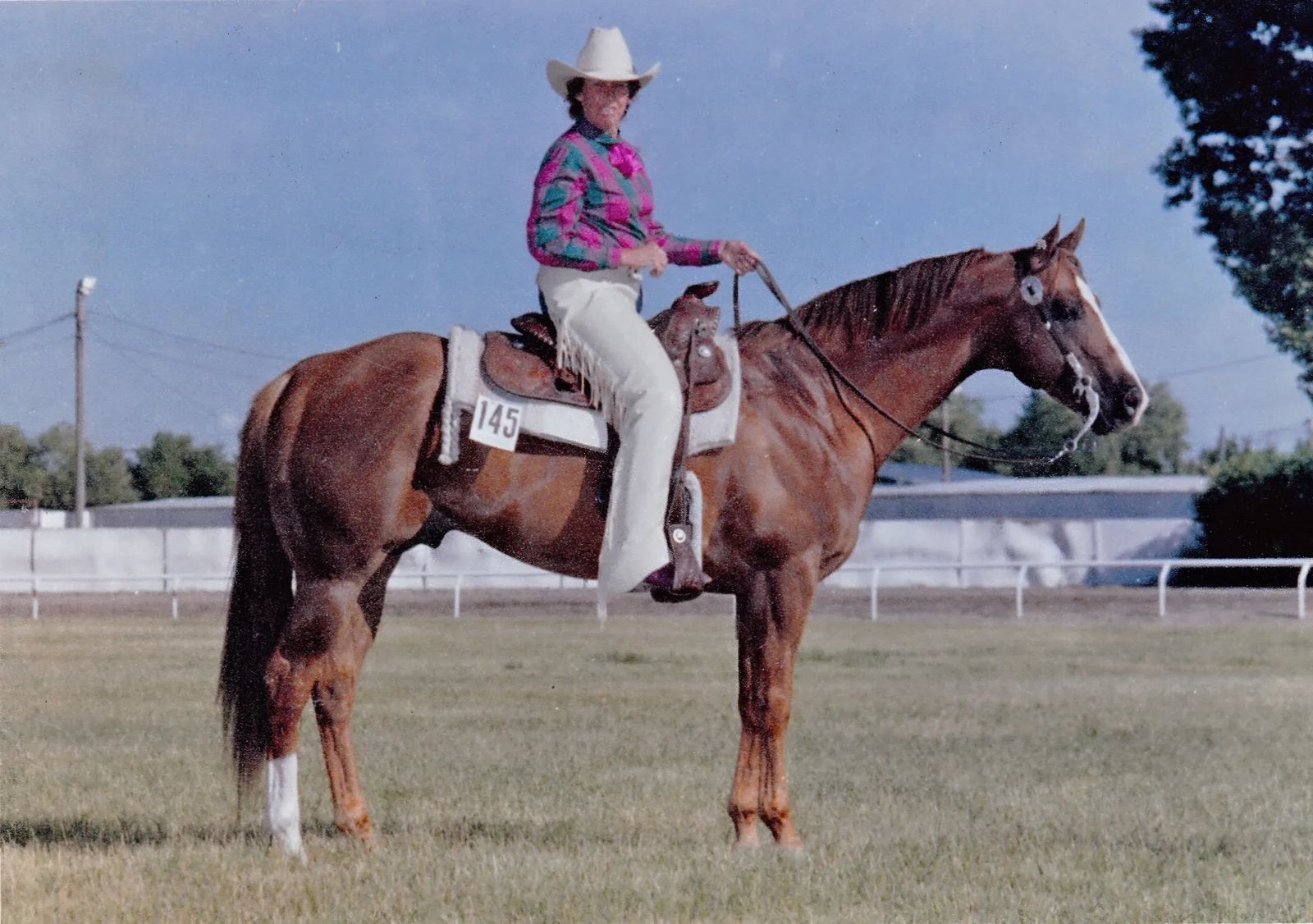 Hester Ann Allemand was born on May 18, 1933 and raised on her family ranch North of Casper, Wyoming, known as the “Staple Three Sheep Company”, Hester quickly learned the value of a strong work ethic on the wide and rough Wyoming plains. She grew up working with cattle, sheep, and horses but became especially fond of horses developing an exceptional eye for both performance and quality. After graduating high school, Hester wished to stay on with her family at the ranch however, her parents, John and Florence Allemand, convinced her to attend the University of Wyoming where she obtained a degree in Business Administration. During this time, she met Jack Rea, a pre-veterinary student at the University of Wyoming and her future husband. Hester’s weekends, breaks, and summers were spent at home on the Staple Three following college graduation in 1955. Jack and Hester were married on July 2nd of that same year.

Shortly after, they moved to Colorado where Jack completed veterinary school. They then moved to Montana and in 1963 established their own veterinary practice and ranch outside Three Forks, Montana where they raised their three children Wade, Teri, and Buck.

Hester had the opportunity to put her business degree to work as the Rea veterinary practice expanded across the state. This is also when her instinctive passion for horses lead her to develop a renowned breeding line of registered Quarter-Horses, raised and trained on the Rea ranch. When Jack and Hester were married, he had promised her she would one day have horses, and horses she had. Hester was adept at recognizing horses that were not only beautiful, but also athletic, capable of working on the ranch and performing in the arena. A number of exceptional horses were produced from the Major Majority and Major Bonanza bloodlines on the Rea Quarter Horse ranch. Hester had high aspirations for her horses, as their reputation reached far and wide, even shipping horses to owners and trainers in Europe. Her three children also became skilled at breaking, training, and showing several horses that came from the home ranch. In the year 1984 Hester’s daughter, Teri, won the world championship title in the Amateur Trail Class at the World Quarter-Horse Show in Oklahoma City on the mare, Hobeau Bonanza: bred, born, raised, and trained on the Rea Quarter Horse Ranch in Montanan. Hester’s breeding program also yielded another world champion, known as Hopes Magnolia Bar; this impressive horse won numerous titles in working cow horse and reigning events across the nation.

Hester’s self-made success and passion for horses enabled her to leave a lasting impact through her desire to promote the industry. She actively served as a Montana state representative on several committees and was the Montana Board Director for the showing organization “Center of the Nation”. She also did much to influence and encourage the expansion and success of the Quarter Horse Association in Montana. Hester would often use all her resources and knowledge to help others and enjoyed watching them succeed - sharing in the victory. She gave much of herself in order to benefit others. Despite her expectation of hard work, Hester also knew how to have fun. There were many times when she instigated extreme water fights no matter what the temperature was outside.

Hester’s strong personality was accompanied by a kind heart. She was as generous as she was passionate and in the best sense of the word - tough. She embraced every challenge with dignity and determination while being fully dedicated to the task-at-hand, never giving in and always moving forward. When she experienced the loss of her daughter Teri in April of 2002 and later her son Wade in July of 2014 it was this dedication to hard work that helped her persevere. Known as the force to be reckoned with, she had a sparkling sense of humor that made her famous for her many “Hesterisms”. These clever sayings that she became known for and would often use include: “Get up! The sheep are leaving.”, “This is the War Department calling, you’d better get to attention!”, and “We’re not baking a cake, get to spurrin’ and scratchin’.” You just never knew what she would do...or say next.

Hester was also extremely devoted to her family and proud of their many talents and accomplishments. She loved teaching them while watching their own passions grow and develop, particularly in the realm of music, which she also loved. Hester strongly encouraged all her children and grandchildren to play musical instruments. She made sure that they all practiced and made it to lessons, and in addition, she joyously attended every recital.

On March 9, 2015, the day that Hester passed away she was not feeling well but none the less was out with her horses. Jack became aware that she wasn’t herself and tried to encourage her to go to the hospital. Not one to complain or bother others it took a neighbor to convince her to seek medical attention. She never returned home having died from a pulmonary embolism. Hester Rea was 81 years young.