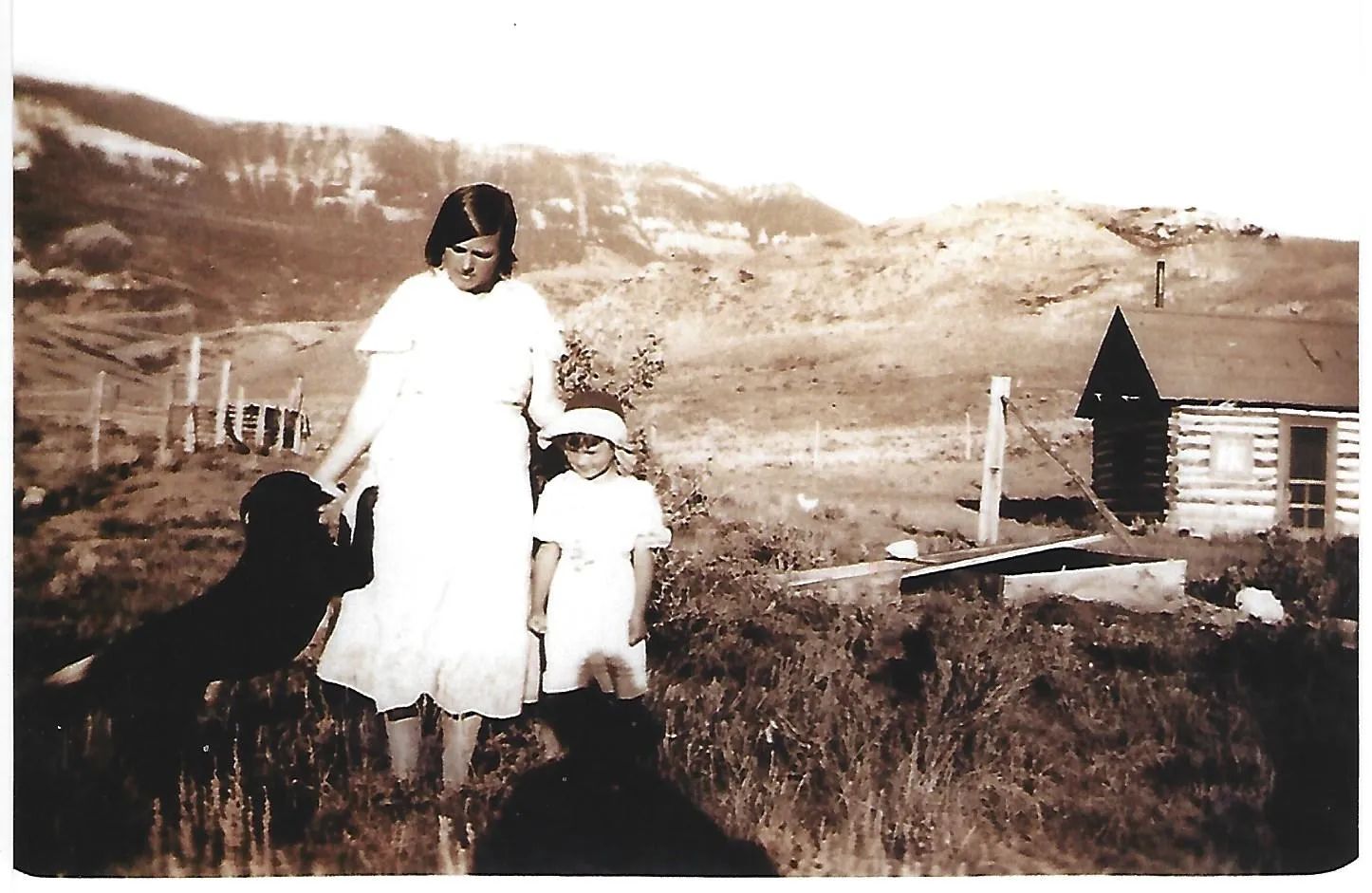 Dry Head, Montana, “place of the dried buffalo skull” is a breathtaking, harsh, geology fascinating land located above the Big Horn Canyon near Yellowtail Dam and situated between the Pryor and Big Horn Mountains. It was into this remote area that an orphan girl, Ruth Elizabeth French, a ward of state, arrived in June 1918. Ruth was supposedly born on January 16, 1907 in Lewiston, Maine. She was raised until age nine by a loving, kind woman, Eliza “Lida” (Brown) Nelson French and her second husband, Dr. A. L. French, believing they were her biological parents. In 1911, they moved from Maine to Lincoln, Nebraska. When she was nine, Lida died and several months later, Ruth was placed in an orphanage by Dr. French as she was not his biological child.

The orphanage brought Ruth, age 11, to Hillsboro, Montana (a few miles from Dry Head) as child labor. Dr. Grosvenor and Edith Barry had applied to the orphanage for a strong, healthy girl to work on their ranch. Young and terrified her first “assignment” in 1918 was to chop wood, haul water, start a fire in the wood stove, and cook breakfast for a host of hungry ranch hands. Needless to say, Ruth failed miserably on her first assignment. She was not allowed food for the entire day when she did not perform her duties to Edith’s expectation. Nor was she allowed to go to school, to town, play with children, just work. Ruth ran away numerous times, always caught and brought back with additional punishment.

As Ruth grew older, one of her duties, at the Barry’s was to run the Hillsboro fourth class post office. It was there she met her future husband, Delbert Thornton Smith, Sr., 20 years her senior. Without so much as a casual date, he asked her to marry him and she agreed. Ruth planned her getaway for months and early on the morning of her 19th birthday in 1926, she made her “escape”. Edith had insisted Ruth was born in 1908 in order to keep her longer than the legal age of 18. It was a frigid cold day when she left with only the clothes on her back and her camera, the only possession brought with her from the orphanage. For fear of being caught, she stayed off the main roads and slept in haystacks to keep warm. Several miles through rugged terrain she made it to the home of Mrs. Boyce. A month later Bert arrived at the Boyce’s with a horse for her wedding present and means of travel to Red Lodge, Montana to get married. They lived in Bert’s one-room log cabin, without electricity and running water, had some chickens, a few milk cows, and raised cattle. In the winter evenings they would read and recite poetry. They had two children. Their first child, Delbert Thornton Smith, Jr., born February, 1927, died at five weeks of whooping cough. Their second child Winifred “Wampy” Smith, was born in 1929. In April 1935, Bert was riding across the Shoshone River, leading a second horse. The lead rope went under the tail of his horse and he went to bucking. Bert landed in the icy cold river, contracted and died from pneumonia. With 12 cents to her name, Ruth was left with a five-year old daughter to support.

Survival for a widow, alone with a small child, on a 640-acre homestead was extremely difficult – both physically and emotionally. Women in this harsh land worked like men and could do most anything physically that a man could. Being an excellent shot, she killed deer for food, trapped bobcats and coyotes, selling their skins for $25 to Sears & Roebuck and worked many odd jobs. Ruth spent three months one summer and received $30 for cutting and securing 3,000 wooden fence post stays for the Caroline Lockhart Ranch. During the depression, she remarked, they “were rich”; they had food and were totally self-sufficient compared to the people in the cities, though they did not have enough money to buy even a single postage stamp. Ruth became a fourth-class postmaster, 1937-1945. The post office was located in her one-room log cabin. She loved reading all the magazines that came in the mail before the addressees picked them up, with their permission of course.

In June 1937, she married a neighboring rancher, Clarence Curen. After a few months he became ill and while he was dying of kidney failure in one hospital in Billings, Montana, her daughter was in the other hospital with a broken leg. Ruth rented a room, spending half the day with Wampy and half the day with Clarence, who soon died. She was left penniless, with hospital bills and funeral expenses. She in turn sold her cattle and unfortunately ended up in the hole.

Ruth met her soon to be husband Henry Weber, Jr., in 1939 and to this union two children were born, a daughter, Nedra, and a son, Henry. Her days were long and back-breaking, growing large gardens, baking bread every other day, canning frantically in the summer so they would have food for the winter, feeding and watering livestock, and chopping wood. They traveled to Billings, twice a year by wagon, a two-day trip, for supplies they would need for six months.

Ruth always looked forward to the Box Socials and dances. The ladies made a special lunch and decorated the boxes to entice a buyer. Neighbors and attendees enjoyed the night’s festivities as men bid on the ladies’ boxes with whom they shared the meal, danced, played cards, visited, and traveled home by horse and wagon the next morning after breakfast.

Some of the simple pleasures in Ruth’s life were horseback riding; fishing with a willow, line and hook, often catching a half dozen or so in a half hour for supper; and reading every book she could get her hands. She was self-educated, valued the opportunity to vote and was always for the underdog. At times she owned only one dress and would wash it out every night. She was well-known as a fair, kind, and loving person who regularly killed rattlesnakes, with a shovel, in front of the cabin to protect her children. Bullets were saved for hunting.

In her later years, it was important for Ruth to find her biological family, as she longed for the knowledge of where her life began. Her daughter, Nedra, began research of her supposed parents, finding living relatives of the Brown and Libby families located in Maine. Much to Ruth’s delight, a visit was arranged and soon they became her “dearest long-distance friends”, calling each other weekly.

A life spent in south central Montana, in the days where only the strongest survived, came to an end on November 20, 1983 at age 76 in San Diego, California. She is buried in Mountview Cemetery, in Billings.