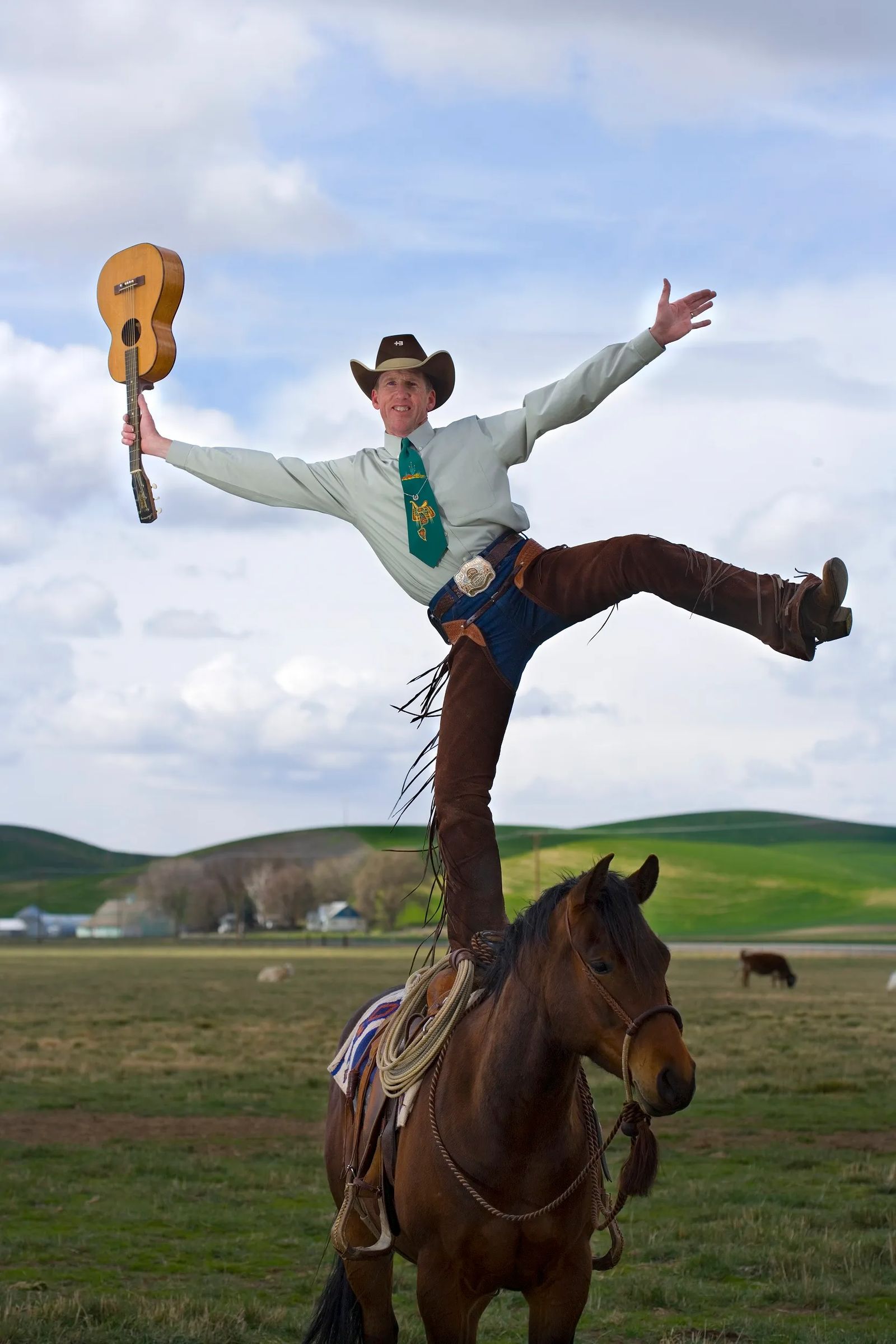 Since 1989, Wylie and his band, The Wild West, have produced more than twenty albums, featuring an array of tracks you can kick your heels to, enjoy from the comfort of your Barcalounger, or yodel along with in the shower. Heck, they even put out a holiday album to help you ring in an authentic cowboy Christmas.

Authentic is the key word here, because while Wylie is absolutely a music star, he is first and foremost a cowboy.

Born June 7, 1961, Wylie grew up on Montana’s northern plains, at the family ranch near Conrad. Days were spent horseback and tending to daily chores. Nights were alive with music, as the family gathered to perform their favorite songs. Wylie’s father strummed his Martin D-18, singing and yodeling now and again. Wylie’s mother, who had a voice fit for the church choir, harmonized. He and his siblings joined in.

Wylie kept at music and eventually found himself in North Hollywood, playing as a regular on Ronnie Mack’s Barn Dance at the Palomino Club—the only joint in Los Angeles you could get away with playing original country Western. It was under these circumstances that The Wild West was born, blossoming into a bonafide country rose among a field of cheap imitators.

“The country music industry has become silly. It does not reflect the country lifestyle in my mind,” says Wylie. “I made it a goal to promote the cowboy lifestyle and celebrate our culture in a way that is real.”

The secret of Wylie’s musical success isn’t in any musical formula or flashy gimmick. Its purity lies in his earnestness, enthusiasm, and a smile as welcoming as the Big Sky.

“Because I’ve traveled and lived other places, I’m absolutely sure Montana is the last best place,” he says. “I’ve been all over the world, but my favorite thing is getting back home. My ranch is the foundation of my sanity.”

Horses need to be ridden. Fields must be irrigated. There’s haying to be done. It’s not an easy act balancing a musical career and a Quarter Horse ranch, but it’s an act Wylie takes joy in.

In fact, he says it’s in his genes.

In 1938, the family horse operation was established by his father, Raymond “Rib” Gustafson, and uncle, Jules “Duke” Gustafson, both of whom were inducted into the Montana Cowboy Hall of Fame in 2013 and 2017, respectively. Notoriously, the brothers traveled to Marfa, Texas in 1939 to bring home the progenitors of American Quarter Horses in Montana. From this stock, they began one of the premier AQHA breeding programs in the state, producing durable horses with success in the rodeo arena, on the racetrack, and on numerous ranches throughout Montana.

Wylie carries on this tradition, operating Cross Three Quarter which continues to produce durable, Montana-type cow horses. In addition to the breeding and training program, Wylie has claimed several regional and national titles within the National Cutting Horse Association astride his super-horse, “Irish Whiskey Sugar.”

Through his ranching, cutting, singing, and yodeling, Wylie has been a fine representative of Montana. His many exploits have brought honor to the Treasure State and helped to spread cowboy culture far and wide.

“I didn’t aim to make my music accessible to everyone, but that’s one of the things I’ve always been proud of,” he says. “I can play in downtown Seattle, and they still get it. It resonates with a wide audience.”

The sincerity of Wylie’s music has endeared him to cowpokes and city slickers alike. He’s appeared on A Prairie Home Companion and Late Night with Conan O’Brien. He’s written the best-selling yodeling guide, How to Yodel: Lessons to Tickle Your Tonsils. And perhaps most notably, he achieved international fame as the voice of Yahoo!’s trademark “Ya-hooo-ooo!”

“The [mainstream] internet was just starting, and that yodel was an internet icon that everybody recognized,” says Wylie. “I always dreamed of writing that three minute hit song . . . My hit was three notes.”

From search engine spokesman to Grand Ole Opry performer to his appearance in the 2013 “God Made a Farmer” Super Bowl commercial, Wylie Gustafson has stayed true to his heritage. He’s the poster boy for authentic grassroots country. He’s the face of rural Montana. He’s the voice of cowboys everywhere.

And oh, what a voice it is.