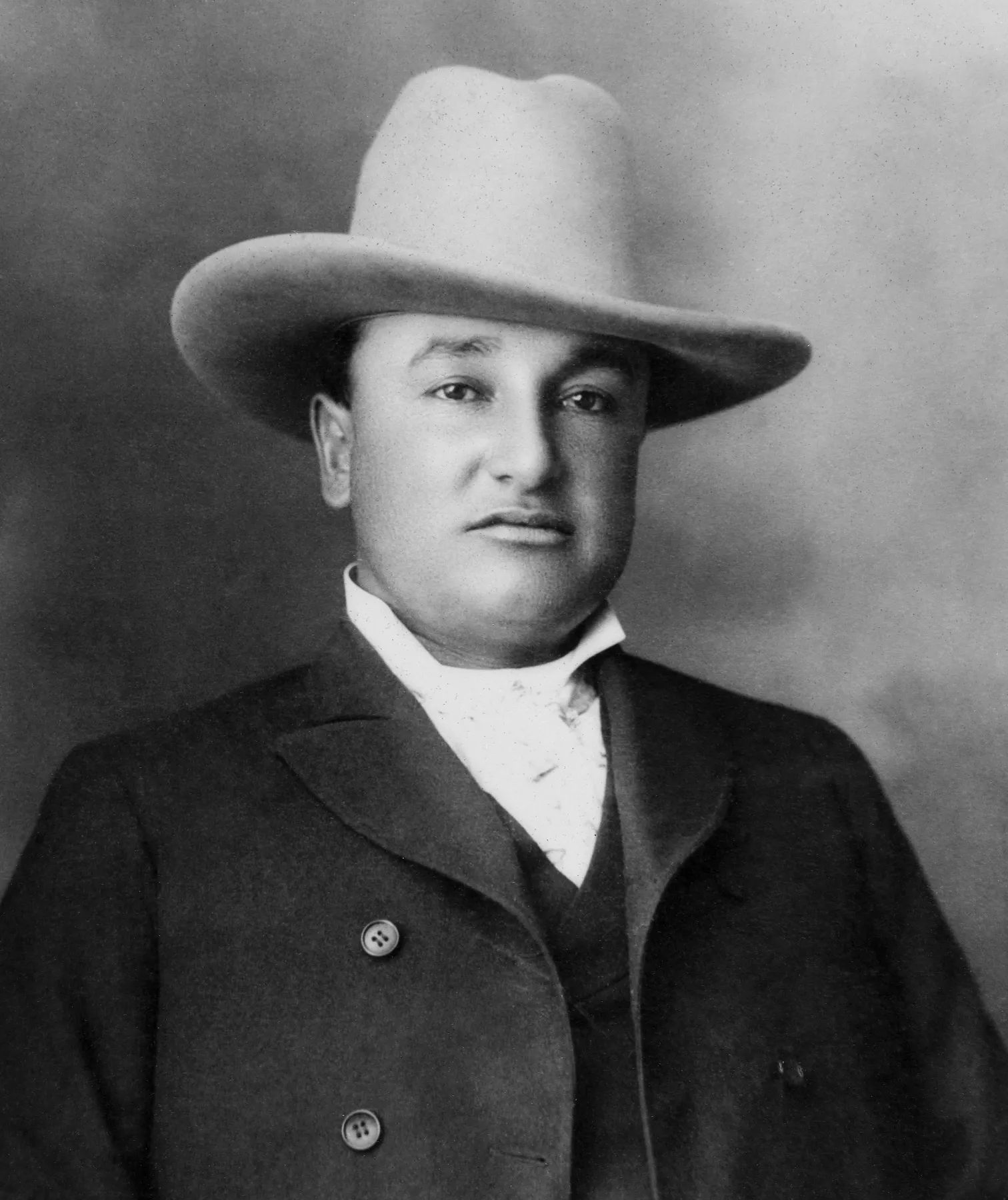 Trailblazer, Belknap “Ballie” Buck was born at Fort Belknap in Montana Territory on August 6, 1872. Named Wolf-On-A-Hill by his Assiniboine mother, Spotted Hail Stone and christened Belknap Buck by his father Army Captain Daniel Webster Buck. Captain Buck was assigned to supply beef to the Indian Agencies. Her father Ah-si-ko-no, the old chief – the storyteller had chosen numerous braves for her, but she chose ‘her Captain’, “he white man, he be my brave.” At age three, Ballie left the reservation and grew up with his father, step-mother Susan and four half siblings Pauline, Lucinda, Dan and Amos. Nakoda, and son, Charlie, stayed with her people. One day the school principal arrived at the Buck residence “It’s not because your son doesn’t do his work: it’s the complaints.” Capt. Buck remarked, “I shall solve the problem of these ‘complaints’ myself.” “Ballie how would you like to go to the Tetons, work for Sam Burd on his horse outfit and go to the Old Agency School?’ Years later Ballie shared with his wife, Myrtle, “My father was wise in not telling me of the prejudice. I went merrily on my way thinking that black and brown were all on the same level as whites. It was years before I looked in the mirror to see if I was dark, and I am plenty dark.”

At the age of eight, Ballie scrambled up the tongue of a chuckwagon onto his saddled horse joining his first roundup. Pulling his own weight, he wrangled and held the cut. As Ballie grew, his notable cowboy reputation became apparent on both sides of the Montana Alberta border. As a half blood, of mixed Indian and European descent, Ballie learned to straddle the race barrier as easily as he did a saddle when taming the wildest broncs. He embraced his heritage, rode tall and proud, was known as a well-mannered gentleman, an artist, and a writer. His father had told him when he was young, “You’re going to be big and strong but unless you’re a gentleman you’ll just be big.” Everywhere he worked his name was elevated and spoken with a smile. Ballie Buck became a legendary Montana cowboy.

Ballie was an outstanding horseman and a thorough and practical range cow-man. For years he was known as the best roper on the Canadian range and later described as having few equals on any range as a heeler in dragging calves to a branding fire. As a wagon boss, he held the respect and loyalty of his men, as well as the confidence and support of his employers. Campfire stories were often shared about him and how well he knew cattle. Ballie’s greatest honor was earning the trust and respect of all who knew him. He belonged to the intimate circle of genuine old-time range cowboys including cowboy artist, Charles M. “Charlie” Russell. Ballie was one of Charlie’s closest friends and a central figure in Russell’s book, Rawhide Rawlins. Russell delighted to inject Ballie’s character into numerous writings and identified him in several painting and sketches. “We savvied one another like two old cowponies that ran together for a long time.” Ballie recalled, Charlie himself said, “That’s one Indian that knows what the cow said to the calf.” Ballie could hold a conversation with range critters and did so frequently, witnessed by others. His tales of the early days were marked by humor and insight into human nature. Old cowhands like Ballie often thought more of the herd than absentee owners and frequently saved cattle outfits thousands of dollars as a result of the pride and loyalty in their work. There were not but a handful of men who worked for wages that would fight to the death to protect another man’s property. Men like Ballie were worth their weight in gold when they rode for the brand. Few people knew how easy it was for a “green horn” to ruin thou-sands of dollars’ worth of prime beef.

In 1890, Ballie hired on with the Montana Circle Cattle Co. and stayed until 1902. He was with its Canadian herd until 1910. In 1893 he accompanied a Sand and Taylor (ST) Ranch posse to locate several horse that had been stolen. After trailing them for several days he and his cohorts cornered the rustlers, exchanged gunfire, recovered the animals and returned them to the ST headquarters on the Teton.

During the devastating winter of 1906, range stockmen found their herds diminished by half. A conglomerate of cow outfits met in the spring of 1907 and organized the last of the big open-range roundups. This covered the vast territory from the Rocky Mountains International Boundary Line, north to the Bow River and south between the Teton and the Missouri rivers of Montana. Ballie, who was running the Circle wagon, was unanimously selected by the other wagon bosses as captain of this historic event. It was the largest and final assembly of that magnitude working together. One hundred and thirty thousand head of cattle were rounded up.

Ballie was one of the most efficient, favorably known, and highly respected judges that ever officiated at genuine cowboy contests in Montana and Alberta. In 1912 he was handpicked as a bucking horse judge for the first Calgary Stampede managed by visionary and Wild West performer Guy Weadick. Fellow cowboy legend, Teddy Blue Abbot, said it best, “Way up Sun River, close to the Shining Mountains, where the grass grows plenty and the water is sure cold and clear, lives ‘Judge’ Ballie Buck, now running a cow outfit, who for many years was one of the best-known cowpunchers in northern Montana.

Ballie and Myrtle Dennis, an elegant English Canadian, met at a costume ball and were soon courting. “My Dear Ballie, I faced my parents with the fact they are prejudiced unfairly and have no knowledge to justify their decision. I told them if they knew you, they could not possibly reject you.” While Ballie called her “His Queen from Ontario”, her parents chose to disown her. The cowboy and his queen were married for thirty four years and had one son, Stephen Webster Buck, who died at the tender age of two. The local Masons were supportive of Ballie and Myrtle when they lost their only child. Ballie conveyed his respect for the good men and joined the Masonic Society. In 1928 he became Worshipful Master of Augusta Lodge No. 54.

An artist in his own right, Ballie drew countless sketches of the cowboy life and Indian culture. He won first prize, with various pieces of art exhibitions, at the annual Montana State Fair in Great Falls, Montana. Ballie retired from the cattle business in 1930. His final job as foreman was with the J. B. Long – LF Ranch, spanning a decade. In 1934, Ballie was appointed as the Deputy Law Officer of Augusta. He lived out his final days in Helena where he died on March 31, 1943. He was buried at the Masonic Cemetery. A special solo of “Home on the Range” was sung at his funeral for those in attendance.

Russell, Charles and Weadick Guy: “A Match Made In Stampede Heaven.” Academic Journal article from Alberta History, Vol. 60, No. 3.

Belknap (Bally) Buck. “In the Shadow of the Rockies, A History of the Augusta Area. (Copy of article through the Montana Historical Society.)

Buck, Belknap “Ballie.” “When Lowry Took Russell and Me To Eat.” Montana The Magazine of Western History, A publication of the Montana Historical Society. Volume XXIX, Number Two, April 1979