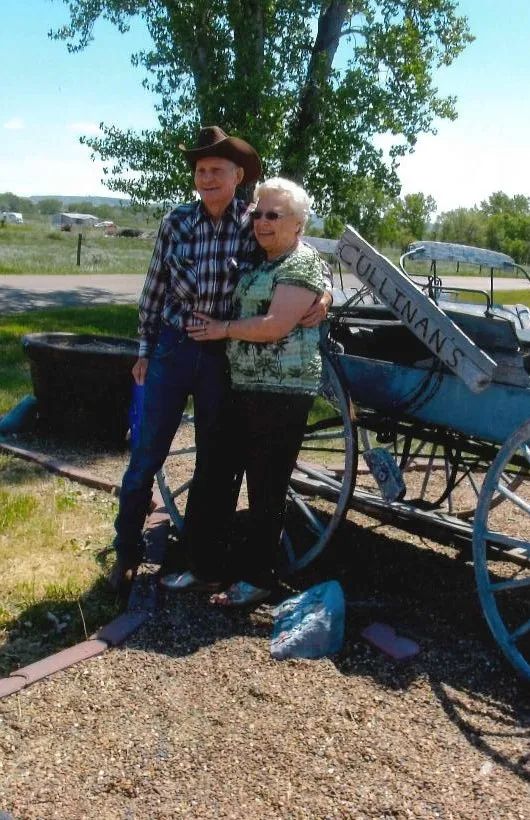 William Cullinan was born May 18, 1932 to Lott and Amaletta Cullinan in Paris Montana. When “Bill” was two, his parents divorced. Bill and his older brother John went to live with their grandmother Agnes Cullinan. To support them, Agnes delivered mail on horseback. Grandma Agnes taught them how to ride because it was miles to the nearest neighbors and town.

Joe Cobb asked the boys to help him out since they had become such good riders. Unbeknown to them, on occasions Bill would get in front of a herd of horses and lead them into a canyon so they could cut out unbranded heads. It wasn’t until many years later that they learned that Joe was rustling horses and ended up being shot for his crimes in South Dakota.

When Bill was 12 and John 14, they went to work for Charlie Fulton herding a band of sheep in the Burns Creek area. They lived in a sheep wagon on the prairie. Charlie went to California on business and left Bill and John for three months to manage the herd of sheep on their own. Bill had to figure out on his own how to operate the pickup as they needed to drive to the town of Savage to buy their groceries. Bill later herded sheep for Floyd Wilson in the Sentinel Butte North Dakota area. While there, Bill and his dogs would earn extra money by hunting pup coyotes and receiving $5 for their ears.

Bill and John moved to Glendive, Montana and lived in a granary while they attended Sacred Heart Catholic School. The Nuns said they always came to school clean and were the best behaved kids. The bellboys at the Jordan Hotel would let them come up the back stairs so they could bathe. As they grew older a respectable friendship grew between the boys and the Priests.

Bill and John started to dig out a basement on the south side of town to live in. Their team of horses got loose and took off and they were not able to catch them. They had to finish the shoveling by hand. Their friends lent a hand so they could get the house finished and one of them helped build the cupboards. They had to behave themselves because they now lived next door to Bill Dobson, the Chief of Police.

Their friends would want to watch Bill ride wild horses that were just brought in, so Jack Brandt would carry his saddle for a couple miles so Bill could use it. At times they would wait at the livestock pens by the railroad until the manager would leave and then they would sneak in so they could ride the horses.

When they wanted to see a movie, they would search the alleys for glass beverage bottles until they had enough for the 14 cent admission. Bill worked at the bowling alley setting pins by hand and would receive extra money when he cleaned and painted the pins.

In the 1950s Bill worked for Bill Gerteson and exercised his racehorses, including Nelly Friday. Nelly Friday was well known throughout Eastern Montana for winning one mile races.

Bill and John, as teenagers, had to visit the judge and accept responsibility for three half-brothers and two half-sisters to keep their fathers second family from being split up.

In 1953 Bill married Alice Lange, from Savage. They had five children and lived on the outskirts of Glendive on Marsh Road.

In 1963 Bill, Alice, John and his wife Eloise bought the Parson Ranch on Belle Prairie. The brothers worked nights for the Norther Pacific Railroad as car-men. During the day they attended their farm and ranch chores. With 11 children between the two families a large garden was planted and tended each year. When the children started going to school, they would all pile into one car to drive themselves to the bus stop. Alice would never know how many extra children would show up when they returned home from school to help with work and enjoy a hearty meal. In the summer, the Cullinan’s would have children from relatives and friends sent out to stay on the ranch. Keeping them busy on a ranch kept them out of mischief in town. On one particular spring day the family was in town to pick up supplies and happened to drive by the bus station. A young man standing alone caught their attention and when they pulled over to inquire his circumstance, he remarked he was from Minnesota and had traveled to Montana to become a “cowboy”. It didn’t take no time for Bill and Alice to invite him to the homeplace. Forty years later he still considers them his family. The Cullinan’s have always helped people down on their luck because they both endured hard times growing up. They still make frequent trips to Billings, Montana to take people, without their own transportation, to doctor appointments.

Over the years they have hired out to pick up square bales, operated a trucking company, hauled cements base pads into the oilfields of Montana, North Dakota and Wyoming and hauled coal from Wyoming to sell in Glendive. Alice had her Commercial Driver’s License (CDL) so that she could relief-drive for Bill. They own rental properties and a motel in Glendive. They had a joint commitment that they would always seek additional income to make it possible to stay on the ranch.

Bill has always had a passion for horses and has never been without a few head. When grandkids came along it gave them an excuse to get a team of miniature horses. Bill now enjoys driving his draft horse team with the support of his children and grandchildren. Over the years he has encountered numerous broken ribs and broke his femur while working with horses, but his love and respect for them remains strong. At the age of 85 Bill bought a colt from a family that had to leave the area for personal reasons. He had strict orders from his wife and the children not to get on that colt unless someone was with him. One afternoon, while out behind the house, he called Alice from his cell phone and asked her to come out and check on him. When she got there, he was sitting on the colt he had broken. It was obvious that he had been doing some training on his own.

When they take a little time to themselves, Bill and Alice love to go dancing. They both agree they are very blessed that they have had each other as a partner to waltz through the many years together.