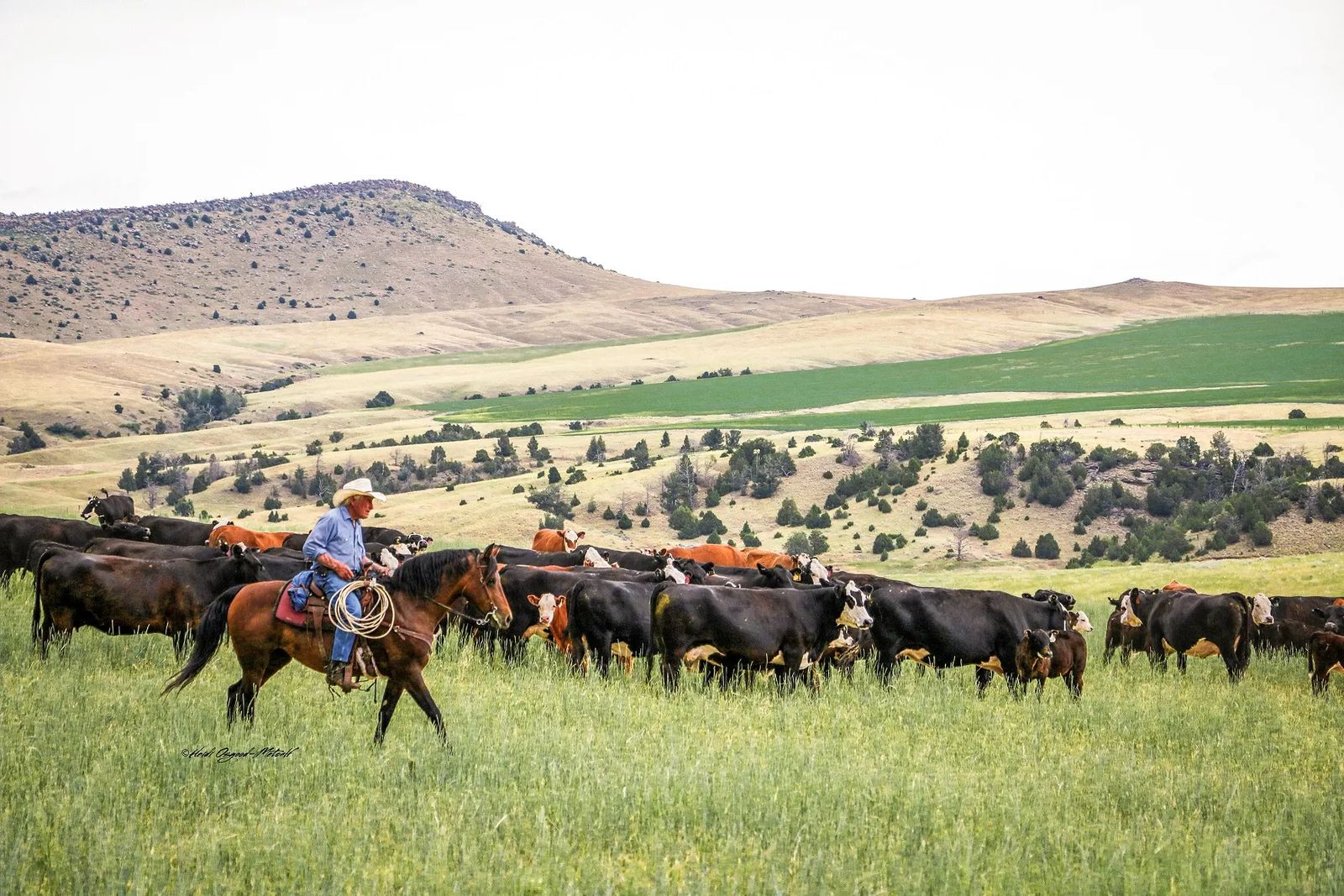 Thomas Jackson, teacher and carpenter of Rochester, New York came to Montana in 1870 to join his brother Peter, who had been hired to work with a mining operation in 1867. Thomas taught school in the area for a short period and purchased a homestead in 1873, near Harrison. Around 1879, Thomas married Emma Gordon. Emma was the one to give Pleasant View Ranch its name. Six children were born to this marriage, Faith, Edith, Rollin, George, Ernest and Joel.

Joel graduated from Montana State College in Bozeman. He retained some of the Jackson estate and formed Pleasant View Ranch/Jackson Morgan Horse Ranch. Joel inherited his father’s love for horses and continued breeding and using them throughout his lifetime. He bought a registered Morgan Stallion in 1920; this was the beginning of his Morgan breeding program. The Morgan’s were used for pleasure, stock, driving, light draft and were also marketed. In addition, the ranch was breeding draft horses to sell and for personal farming needs.

Joel was a progressive thinker. In 1926, he had the first combine in the valley, along with home-installed water pressure and an electrical system, prior to power lines. Joel married Virginia Ellis in 1923. Four children were born to this union, Rollin, Bill, Edith, and Dean. From an early age the children helped with the ranch work. They all graduated from Montana State College, Bozeman; Edith with a degree in Home Economics and Rollin with an engineering degree. Bill and Dean, with Animal Science degrees, returned to the ranch to partner with their father and mother to form J.C. Jackson and Sons.

Dean married Betty Albro in 1949 and had two children, Debra and Joel Dean. Dean and Betty traveled the Northwest and showed the Jackson Morgan horses. Dean was a director in the Morgan Horse Association, a certified horse judge for several breeds and one of the founders of the National Morgan Cutting Horse Association. Tragically, he was killed in a tractor accident in 1965. Bill and his father Joel continued breeding and selling Morgans, increasing acreage and stock to include Black Baldy cows, irrigated and dry land crops.

In 1974, Bill and Betty were married. Together they showed Morgans in Cutting and Reining, including the national finals in Oklahoma City, and continued to do so until Betty’s death in 1996. Bill was president of the Morgan Cutting and Stock Association for several years, featured in several Morgan Horse Magazine issues and inducted into the American Morgan Horse Hall of Fame. Most recently, Bill received the Madison County Conservation Stewardship Award. Pleasant View Ranch was honored in the 125th Anniversary Montana Stockgrowers book The Weak Ones Turned Back, the Cowards Never Started-A Century of Ranching in Montana.

Shaped by earlier generations who proceeded, Bill is a man of few words. With a calm demeanor, he expresses kindness and understanding to those around him. Bill is an excellent land conservationist and livestock handler. Currently, there are about 50 registered Morgan Horses on the ranch. He has ridden and trained most of them in everyday ranch work, including calving, gathering and trailing cattle, driving sleigh, buggies and carts. At 95 years young, he can name each horse by its registered name. Not one for wasting time - he still puts in a 10-hour day, moving cattle, controlling weeds, swathing hay, managing water rights, attending bull sales, and working with his horses. Time indoors is spent on ranch bookwork, reading current news and keeping up on the ever-changing ag industry. Bill has an astounding love for his family, but it could be preceded with his passion for “Mike”, his ranch dog, and the Jackson Morgan Horses. In Bill’s words, “I never found anything I desired more to do but to stay on this ranch. Ranching is a lifestyle, not a job. If you don’t like it, don’t do it. It’s not a way to get wealthy.”

Joel Dean married Debbie Voth in 1981 and had two sons, Justin and Nathan. Nathan and his wife, Tayler, and their children Evan, Ella, and Nora, have taken an active role at the ranch. Dean, Debbie, Justin and wife Laura are currently living and working on the homeplace. Dean’s sister, Debra lives in Bozeman and has a daughter, Kelsey, living in Portland, Oregon.

The ranch has carried a cattle-grazing permit in the Beaverhead National Forest for more than 100 years. The original single “T” stock brand on the right hip acknowledges its history. The Pleasant View Ranch/Jackson Morgan Horse Ranch has left an outstanding imprint upon the land of Montana, largely because of the influences laid forth by hardworking family members. At present, the third, fourth, fifth and sixth generation of Jacksons are committed to carrying on and honoring the Jackson family legacy.