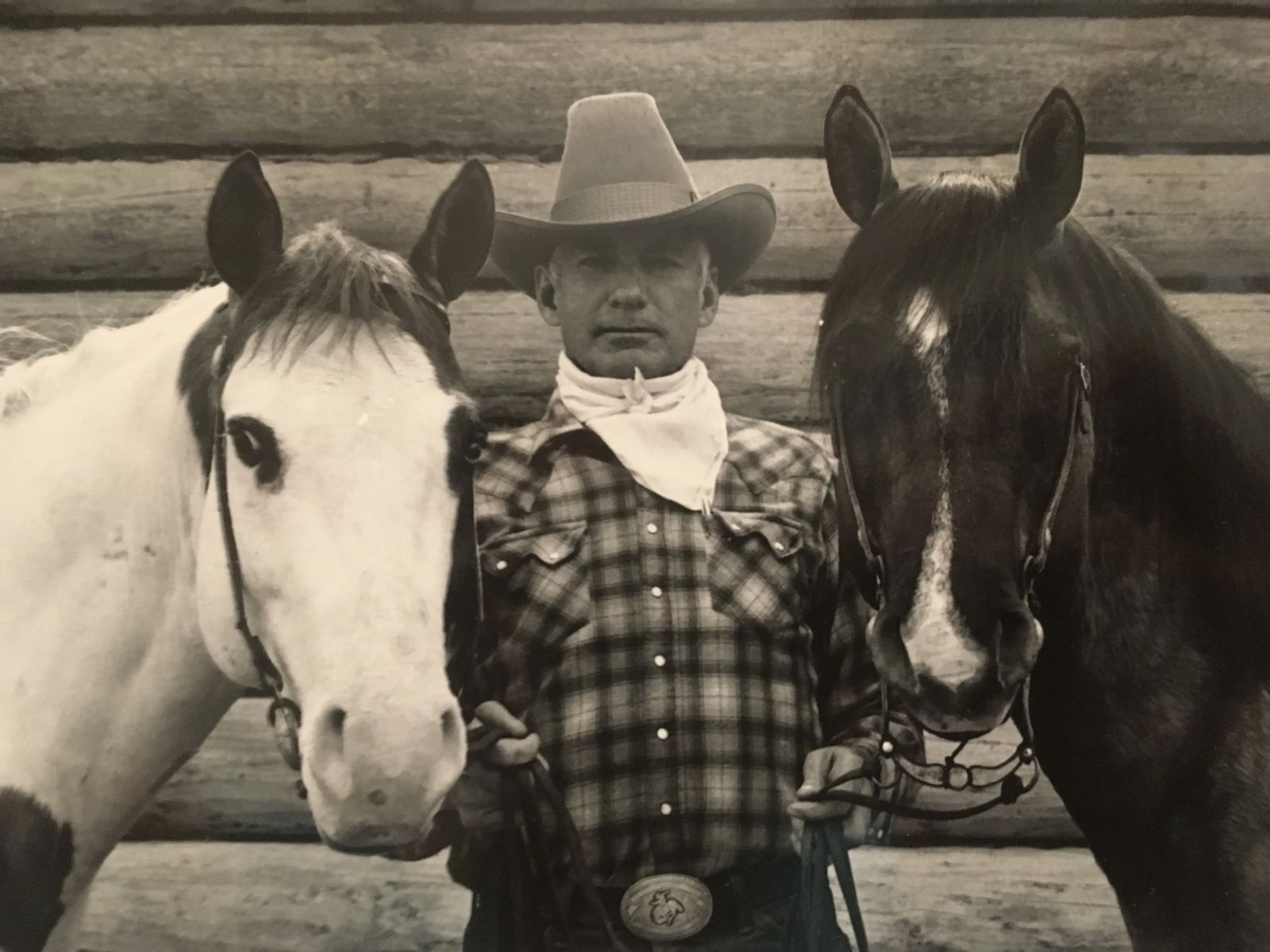 Alex Nixon “Alec” Ogilvie was born October 1, 1924 in a tarpaper shack in Cohagen, Montana. He was the second youngest of seven children born to Alexander and Cuma Ogilvie. It was a hardscabble existence, and Alec was raised under tough circumstances. In 1936, when Alec was 12, Cuma and Alexander went their separate ways and she moved with the children to Greeley, Colorado, where Alec finished school, graduating in 1942, just as World War II was looming. He joined the United States Marine Corps, where he trained as a paratrooper and sharpshooter, seeing extreme action in the South Pacific. He was heavily involved in the fighting at Bougainville and Iwo Jima, which created such horrific memories that he never recounted. The only good military story he told was of building an oven on the beach, and creating a pie out of military rations, which he and his buddies baked and enjoyed. After the war, he served as Military Police (MP) in Japan and was honorably discharged in 1945.

Alec moved back to Eastern Montana, where he was hired to teach school in Spring Creek, in a one-room schoolhouse with less than ten pupils. Alec always said he quit teaching when the kids got smarter than he was!

He went to work for Bud and Bobby Kramer, rounding up wild horses, and trailing them to the railhead in Ingomar for shipment to Chicago, Illinois. When his saddle horse grew tired from running through that rough badland country, Alec would proceed to rope, tie down, saddle and step on one from the wild bunch. He always said it was better when they ran off, because they can’t buck when they are running away with you. Alec lived in an unheated sheep wagon for six years while in the Cohagen area—talk about tough.

In 1951, Alec and Ethel Lambert were married. They had four beautiful daughters, Marcia, Della, Alexa and Rinda. They moved to Florence, Montana in 1957, shipping 150 head of horses and 1500 sheep by train. The family close-herded the animals six miles to their new place on Carlton Creek, where they trained barrel horses, and bought, sold, and traded horses and other livestock. Alec was a good hand with horses, and commanded respect because of his abilities. He had no need to brag on his talents as they were self-evident. He was not an arena cowboy but he was the “real deal.” One time at a Niarada, Montana, rodeo, a young cowboy got hung up in his bareback rigging with his hand completely turned over. The horse was bucking, and kicking him mercilessly, and the pick-up men missed their loop. Alec was sitting on the fence, when the horse came by, so he leapt out, caught the horse by the neck, eared him down to a standstill. Others assisting had to literally lift the cowboy up and turn him over to get his hand out from the rigging. Alec’s action most likely saved his life. Alec was a quiet man and had a wry sense of humor. He was all cowboy and respected all the values that come with that title, but was not stuck in the old ways, either. He wore moccasins, instead of boots, as they offered more comfort.

Alec trained barrel horses for his wife and daughters to compete on. In 1963, Ethel won the Montana State Barrel Racing title on “Blackie,” a black stud horse Alec had trained. She won the state title again in 1972, and 1973, this time riding “Wright Bar,” also trained by Alec. Ethel and the girls’ winnings racked up money, saddles, and horse trailers. Many barrel horses trained and sold by Alec became nationally ranked for their owners. The Ogilvie daughters did their share of winning barrel races, and also contributed to the family income by riding many horses through the sale ring, giving the impression that they were “kid” horses—and they were, if your kids were “hands”.

Alec and Ethel divorced in 1974, and Alec continued to buy, sell and trade horses—or any other animal providing a profit margin.

Alec and Claudia Whiting were married in 1976, and they also had two beautiful daughters, Skye, and Blue. After six daughters and no sons, Alec remarked,” I sure was one heck of a filly sire.” Claudia is a real hand in her own right, and their family life was always centered on rodeos, ranching, and the Western lifestyle. Alec exchanged a lot of livestock, specializing in horses, while Skye and Blue test-drove many for clients. One sorrel pony, “Scotty” passed through Ogilvie hands seven times! He was a money making little horse! When it came to horse-trading, Alec knew what he was doing and you’d better know something, too! He never lied about a horse, but he never felt the need to share what was “obvious” about it either. He believed the buyers had the right to make choices without his interference! One time a fellow purchased a horse, then brought him back two days later after getting piled. The buyer said, “You never told me this horse would buck!” To which Alec replied, “The guy I bought him from never told ME he would buck!” As testament to his horse-trading abilities, a banker once announced at a public gathering, “I did not think it possible for a guy to make enough money to buy a ranch—by simply buying and selling horses—but Alec Ogilvie did it!”

Alec also dabbled in Senior Pro Rodeo for a time. In 1977, he rode his last saddle bronc in Roundup, Montana; he was 53 years young—a ride he made in his stock saddle.

Old friend, Zack Bugli said, “When Alec died, they broke the mold. He forgot more about horses than most people will ever know!”

Alec passed away March 23, 2008, at the VA Nursing Home in Sheridan, Wyoming. His ashes have now blown to the wind north of Jordan, Montana, located on the Murnion Ranch. His marker tells the world, “He was a Cowboy”.