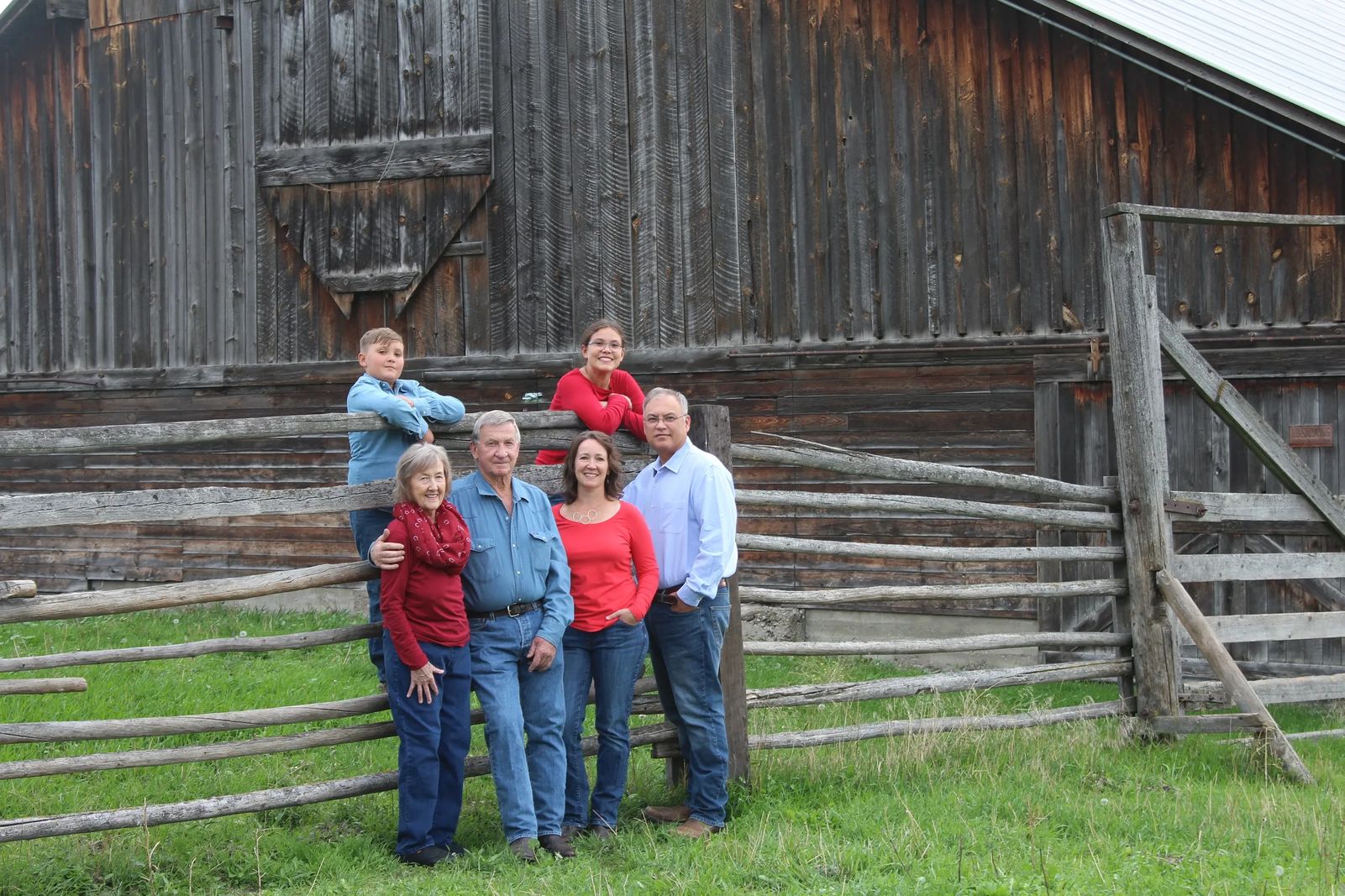 The Quirk family has been ranching in the Tobacco Valley of northwestern Montana since the arrival of the Quirk brothers; Tom and Maurice.

Tom left his family near Glenbeigh, on Dingle Bay, County Kerry, Ireland and arrived in Butte, Montana in the 1870’s. Tom first came through the Tobacco Plains while heading for gold on Wild Horse Creek near Fort Steele, British Columbia. He later wrote to his family in Ireland that this area near Eureka, was one of the most beautiful places he had ever seen. Tom returned to the valley in 1880. Within the year, an aging prospector friend, who had a dugout dwelling, turned it over to Tom stating, “… you can make a fine ranch of this place.” Tom’s sharp mind and driving ambition led him to file his first water right in 1884, bring cattle in 1886 and continue to acquire more adjoining land.

Maurice, stowed away on a freighter bound for America and joined Tom in 1892. He spent many of those early years exploring the area as well as periodic journeys to seek his fortune in gold. In 1896, Maurice met and married Mary Harrington in Butte. In 1898, he joined the Klondike Gold Rush with hundreds of others. This led him across White Pass, a dangerous trek, that resulted in frost bitten lungs. Upon his return, he brought Mary to the Tobacco Valley and settled down to ranch life. The couple took up additional quarter-sections adjoining Tom’s expanding acreage. They focused on building up the finest ranch, the Quirk Cattle Company, represented by the 101 brand. Maurice and Mary had a daughter, Hazel, and three sons, Tom, John, and Emmet. A younger daughter, Ethel, died at age two.

Following Maurice’s arrival in 1892, the brothers invited their sister, Johanna, to join them with the consideration of filing her own homestead claim. With the Quirk wit and independence, she took them up on their offer, arriving in 1893 to file her own claim. She married John Cuffe in March of 1897, settling on her property and raised six children; Raymond, Aileen, M.L. “Tiny”, Tom, John, and Marie. Some of her grandchildren and great grandchildren remained in the Tobacco Valley in various capacities, including carrying on the ranching tradition at another property adjacent to the original 101, currently called the Shea Ranch.

Over the years, the Quirk’s ran cattle throughout the valley and surrounding mountains, hiring cowboys to keep the cattle away from nearby Eureka. During those days of free range grazing the only fenced acreage was the hay meadows. When their herds were at their greatest, they leased summer range from the U.S. Forest Service in the Fortine and Pinkham Creek area. Cattle weren’t the only source of income for the Quirks who relied on some unconventional methods to make ends meet including running a local dance hall, rounding up wild horses for the military, growing peas for the war effort and turning a blind eye to rum runners in their pastures during Prohibition.

In 1912, at the age of 48, Maurice died in Phoenix, Arizona, where he had gone hoping to restore his health. After his death, Tom, Mary, and Maurice’s children operated the ranch for another 12 years. During those years the four children were stricken with polio. All of them recovered, except John, who was left paralyzed, limiting his ability to actively participate in ranch work. In 1923, when Tom passed away, Emmet left high school before graduating and joined Tom, Jr. to manage the ranch. With his brothers’ financial assistance, John attended college, where he showed the same commitment and talent that the others applied to ranching. Emmet, who earlier had ambitions to attend college to become a doctor, committed his future to the ranch. He married Grace Downing, a U.C Berkeley educated and well-loved high school English teacher who joined him at the 101. They had two daughters, Alice and Faye, whom they proudly sent to college. Faye married Leland Driggs in 1966 and in 1978 the couple and their three daughters, Sharlet, Tara and Amy moved to the 101 and began taking over the family operation. They have maintained the ranch for over 40 years, most recently with the help of their daughter Amy, who returned with her husband and family in 2014.

For the past 139 years the Quirks have persisted through ranch floods, fires, the scourge of polio, the Great Depression, Prohibition, 22 U.S. Presidents, multiple wars, recessions, droughts and the transfer of ownership through four succeeding generations. The family attributes their success to a stubborn streak coupled with a premium placed on higher education; both in the classroom and in field and pasture. A strongly held conviction is that family members, both men and women, be well educated for individual independence and to ensure continued family success. Embracing a lifelong commitment to learning, the Quirks and their extended family has proudly included inventors, entrepreneurs, teachers, musicians, attorneys, professors, as well as ranchers, farmers, and horse trainers.

In recent decades the members of the Quirk ranch have embraced new ideas and change including a Holistic approach of incorporating management intensive grazing practices as well as low stress stock handling. These practices have improved the overall health of the domestic animals, soils, grasslands and surrounding natural environment. In 1985, Leland invented a hay baling implement which he and Faye manufactured and sold on-site. Their daughter, Amy, developed the marketing and sales expanding across North America and Australia. This additional enterprise has helped balance the uncertainty of the down cattle markets over the years. Adding additional stability, the ranch has recently moved away from the traditional beef commodity markets by joining a rancher’s co-op in the Northwest. Amy and her husband, Jeff Peterson, have begun marketing the family’s grass-finished beef state-wide. Their 10 year-old son, Declan, is following in their entrepreneurial footsteps with his free-range chicken egg business. Their daughter, Stella, who enjoys singing, dancing and drawing is developing her own niche by interviewing willing guests for her latest podcast. Five generations later, and with three generations of motivated enthusiastic family members living at the ranch today, it is expected that the 101 Ranch will continue to thrive well into the future supporting several more generations.