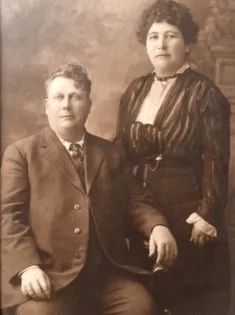 Benjamin F. Stevens was born in Iowa in 1862. That same year the Montana Territory was experiencing the discovery of gold and the establishment of the Homestead Act. These events would shape the State of Montana and inspire Benjamin’s fascination with the western frontier.

After reaching the age of seventeen, “Ben” imagined Montana would provide more excitement and better opportunities. He began making his way westward with several of his own horses and engaged in the freighting business with Pennel & Roberts. Enroute, they passed by multiple herds of bison. Ben hunted buffalo to supply camp with provisions and took his turn as a Nighthawker to prevent horses from being stolen.

Ben entered the Montana Territory in 1880 and settled for a spell in Miles City. As fate would have it, he arrived at a peak time in history alongside hundreds of cowboys driving herds across the open range. The arrival of the Northern Pacific Railroad, later that year, provided direct shipping to packing plants in the east. Young Ben took this opportunity and secured employment with the construction of the Big Horn Rail Tunnel near Custer and pushed west with the railroad to Livingston.

In 1885, he fulfilled his destiny as a cowboy with the Chouteau Livestock Company and remained with them for a number of years. During his next adventure near the Highwood Mountains, Ben was hired as a ranch hand and cowman with an outfit owned in part by A.W. Kingsbury, an influential cattleman who was also credited with bringing the first sheep to the Montana Territory east of the Rocky Mountains. Additionally, Ben rode for the Shonkin Pool, a cooperative of cattlemen that ran their livestock together across an open range that stretched 200 miles from the central to southern parts of the territory.

Ben made his way to the Milk River Valley, in the north central region of the territory, as the foreman of the Jungsbury, or “2 Bar,” ranch established near Zurich. He managed the wild and wooly cattle, and at times cowboys, with a natural talent to direct both.

In 1893, Ben fell in love and married Rosalie Ereaux, a descendant of the A’aninin Tribe – White Clay People. Together they established a ranch at the mouth of People’s Creek in the northeast section of the Fort Belknap Reservation. To this union six girls and one boy were born. The Stevens family was among the earliest people to establish a ranch in the region. Rosalie’s parents, Curley and Pipe Woman Ereaux, were the first to settle in the vicinity.

Possessing a strong business sense, Ben quickly began adding to his herd of cattle and horses. He adopted the “lazy HA” for cattle brands and “lazy LA” for horse brands. The ranch, irrigated from People’s Creek, produced hay and grain, and encompassed adequate acres of grazing pasture for cattle and horses. A variety of horses were raised including Thoroughbred Polo horses, Percheron workhorses, and Shetland ponies. The ranch was one of the most productive in the Milk River Valley, constantly allowing expansion of herd size, improved irrigation and grazing methods, while evolving with technological and mechanical developments.

Ben was instrumental in the development of the Dodson community. He owned one of the first log buildings, which included a general store, saloon and post office. He purchased multiple residences in the town of Dodson and became a stockholder in both the Dodson Co-Operative Association and the Dodson Bank. The Stevens’ also owned a store and post office at Old Hays, near the Little Rocky Mountains. As the Great Depression took hold, Ben expanded his portfolio and invested in a Brazilian banana plantation.

It was a wonderful source of gratification to Ben that most of his ventures were in some way related to the business of agriculture. The Stevens ranch was recognized as one of the most influential of the area and provided employment for decades. People who moved to the area acquired their ranching skills under Ben’s mentorship, such as Seth Birch, Ding Kienenberger and Ike Niebaur, all who later set down roots and became neighboring cattlemen.

Both Ben and Rosalie were skilled conversationalists. Their home was widely known for its hospitality and welcomed a diversity of folks to their table. Their most notable guest, Charlie Russell, sat in their kitchen and sketched his latest muse on the oilcloth table covering.

Ben continued to be an influential stockman, businessman, civic leader, friend and family man until his death on December 25, 1932. His life partner, Rosalie, passed on January 18, 1956.

Benjamin Stevens who embodied the spirit of all true cowboys grew up with the State of Montana and possessed a passion for riding the range, working with livestock and living off the land. His legacy flourishes on the ranch headquarters 126 years later, carried on by the fifth generation. Ben’s descendants continue the tradition of a strong work ethic, provide welcoming hospitality and have prevailed in keeping his heritage and western way of life alive on this side of the Great Divide.