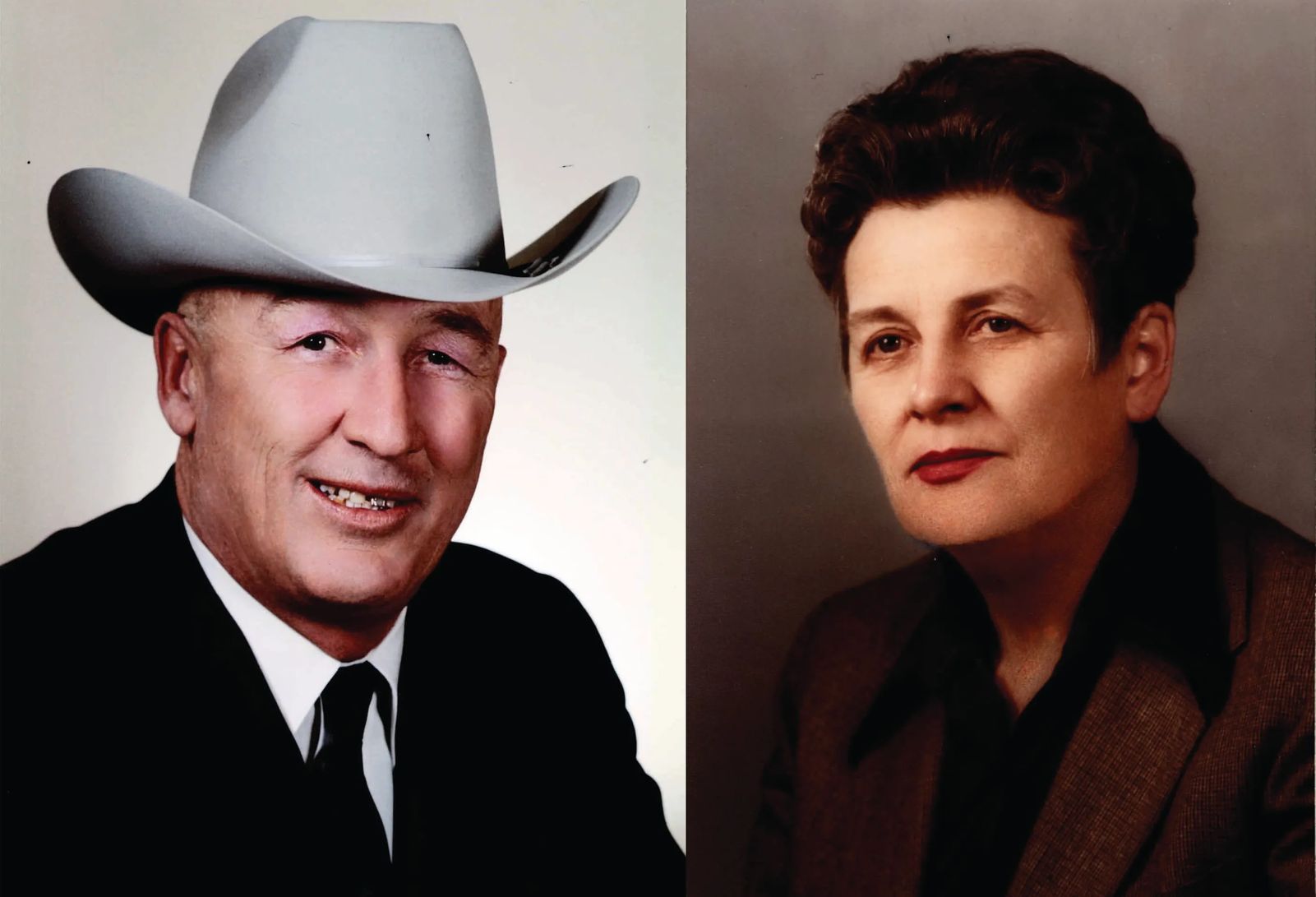 Raised by their parents, Errol and Florence Galt and Bert and Edith Replogle, Jack and Louise Galt were born respectively April 18, 1923 in Geyser and September 9, 1923 in Lewistown, Montana. The Galt’s lived and worked all their lives in and for the state of Montana.

Jack interrupted his college education when he joined the United States Army during World War II serving in the 101st Airborne Division as a medic during the invasion of Holland and the Battle of the Bulge.

After returning to and graduating from Montana State College Jack went to work for the Wertheimer Cattle Company of South St. Paul, Minnesota. The Wertheimers’ Stockyards was one of the two largest stockyards in the world at the time. Henry Wertheimer, Sr. told Jack they didn’t need any more “college boys” but they had a job stacking hay, in Montana, which he appreciatively took. He worked hard and soon earned the cattle buyer job he longed for, receiving a car and a draft book. That fall Jack was called to South St. Paul to meet with Mr. Wertheimer to go over his first-year cattle purchases, at which time Jack received an outstanding $10,000 bonus.

The livestock market “tanked” one year after Jack had purchased cattle so Henry instructed him to find grass to hold them over. After some initial research Jack informed him, “I think you can buy a ranch cheaper than buying grass”. It wasn’t long before Henry was the new owner of the KRM Ranch in Phillips County and Jack was hired to manage the operation. In 1951 Jack married Theresa McBride, they later divorced. In 1955, Jack, Theresa and their four children moved to Utica to manage the Wertheimer Home Ranch. Jack would wear out a car a year buying cattle in Montana and Canada, including time spent checking leased ranches on the Crow Indian Reservation. Four more children joined the family and Utica became “home” for the next 20 years. In this timespan a toddler son passed away.

Louise (Replogle) Rankin was the daughter of a World War I hero, attorney Bert Replogle, who was a Democrat. She received her Law Degree from the University of Montana in 1946. That same year Louise returned to her home town and ran for position of Fergus County Attorney. She beat two men in the Primary and one in the General Election on the Republican ticket to become the third woman in United States history to be chosen as a County Prosecutor, and the first in Montana. Louise soon made national news with her “Raid” of Slot Machines in the Joyland Club in Lewistown in 1947. In 1950 the Montana Supreme court upheld the decision which resulted in a state-wide ban. Louise was a “rising star” in state and national Republican circles. “Mademoiselle” Magazine honored her as one of 10 “Young Women of the Year” in 1949.

Wellington Rankin had won one court case against her, and she prevailed against him in another. She joined his firm in 1951, and they were married in 1956. Louise was certainly a person ahead of her time, and worked hard for causes that she believed in. She was an accomplished horsewoman and loved riding her Appaloosa horses on the 71 Ranch. She began riding at an early age, once trailing the family cows from Lewistown to Grass Range by herself on her pony, bareback. Another time, “cowboys” were hired to gather a herd of wild horses, and when they got there with all of their preparations they found Louise and the ranch crew had the horses gathered and waiting in the corral.

Wellington was thought to be the largest private landowner in Montana at the time, with one million acres of land and 27,000 mother cows at peak operation. Much of Louise’s law practice focused on ranching operations legal issues such as water and grazing rights. When Wellington died in 1966, Louise inherited ranches in seven counties: Broadwater, Meagher, Park, Garfield, Rosebud, Phillips, and Valley, as well as controlling interest in the Placer and Helena Hotels.

Louise Rankin met Jack Galt at a dance - later joking that on their first date he stood her up for a poker game. He soon won her over and they were married on July 22, 1967. Louise added working mother to her titles of attorney, businesswoman and rancher when Jack brought not only his strong managerial skills to her ranching operations but seven children to their union. It was a readymade family that she loved as her own.

Both Jack and Louise served as delegates to numerous Republican National Conventions but it was Louise who cast the Montana vote that gave Ronald Reagan the nomination for President of the United Sates. Jack, who once fulfilled a two-day interim as Governor of Montana served 20 years in the state Legislature and as Montana’s Republican National Committeeman. He was part of an influential group of senate conservatives and served as Senate President in 1989. Jack was once stopped in the hall of the Capitol by a woman saying they needed him in a committee meeting on “culture”, he looked at the lady and replied, “ma’am, the only culture I’m interested in is ‘AGRIculture’”. He also served as chairman of the Montana Reserved Water Rights Compact Commission.

Jack was not a big man but would staunchly defend what he felt was right. He never asked a cowboy to ride a horse he wouldn’t ride or do a job he wouldn’t do. Jack was a tough negotiator and a strong-handed boss, but also fair and compassionate to those who labored with him. Together, Jack and Louise managed the Rankin Ranches until they were passed on to three of Jack’s sons, who continue to operate and expand on the properties today.

The ranches provided numerous people a second chance, when others wouldn’t, and afforded opportunities for cowboys to become better cowboys. Some most notable are Jack Short, Jay Contway, Pat Bergan and the late Bill Loney and Larry Kane.

Jack died September 8, 2007 and Louise on November 21, 2013 both are buried on the 71 Ranch. In their life together they enjoyed their family, ranching, politics and traveling.

Few have done more to make the Treasure State a better place for fellow Montanans to live and raise their families than Jack & Louise Galt.