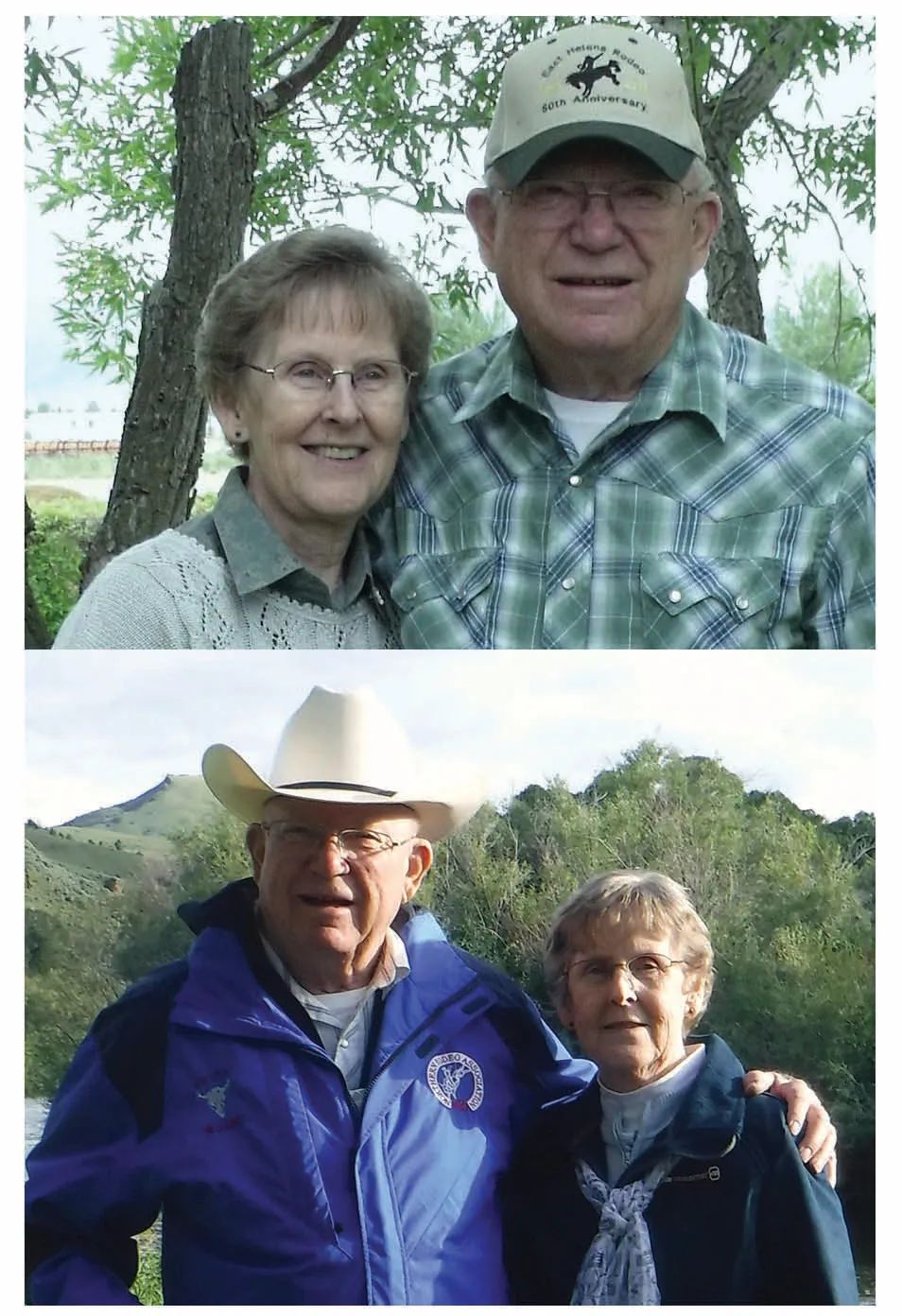 There are many household names in the rodeo world and in Montana one of those names is Nordahl. Rodger and Sheila (Johnson) Nordahl have been involved in some aspect of rodeo and the western way of life for as long as they can remember. The couple met in 1956, when Sheila formed a friendship with Rodger’s sister, Gayle. The two did not start dating until 1958, but knowing quickly it was a PRRFECT match, they were married on May 16, 1959. The Nordahl’s welcomed their first son Kevin in December of 1959, followed by Rodger (Skeeter) in 1960, Rick in 1963, and Kent in 1964.

Rodger was born to Guy and Neva (Rowton) Nordahl in 1939 in Fairfield where his father was farming land leased from the government. When Guy was offered a ranch management job near Canyon Creek northwest of Helena, Montana this became the first of many moves for the family as they followed the ranching lifestyle which then led them to the Toston area next. The family eventually returned to the Mosby area, where Guy was raised. As with all ranches, there was plenty to do with the haying, branding, gathering and moving cattle. Rodger and his brother, Gary, were now old enough to carry their weight. They broke colts, delivered water to the haying crews on their Shetland pony, which they also rode to and from school. Rodger’s next ranch adventure was near Hardin. A new experience was added to his chores, picking weeds from rows of corn. In 1950 the family moved to the Helena area, and his dad accepted a job at the Montana Meat Company, as their western way of life continued. Rodger would return to Mosby to help his uncles with their ranch work during the summers of his 7th and 8th grade years.

Sheila was born into a farming community in Henning, Minnesota, in 1942 to Melvin and Amy (Anderson) Johnson. She fondly remembers riding on tractors, hay wagons and horses at a very young age. The Johnson family celebrated the Fourth of July with a picnic in Mosby, Montana in 1950 and then drove onto their new home in East Helena, Montana.

Sheila had ridden horses intermittently throughout high school but did not become an accomplished rider until after marrying Rodger. It was at this time they decided to start breaking and training horses to help afford the purchase of horses for their sons. After an eight-hour workday, they put in some late nights riding colts for a local rancher. Rodger would begin the training and Sheila would add the finishing touch.

One of Rodger and Sheila’s yearly highlights with their boys was the spring cattle drive for a neighboring rancher, trailing cattle from the Fort Harrison area to the Lyons Creek summer pasture. The ride would take up to two days, often dealing with traffic, trains, and rattlesnakes. The highpoint of the trip was camping overnight in the mountains. During this time the family also leased the Head Ranch west of Helena, for summer pasture for their cattle and putting up hay along with Rodger’s Dad and his brother. The lease ended in 1987 with the decline in cattle prices and a change with Rodger’s job. The family continued to raise horses and put up hay on their own land.

Ranching experiences shared with their sons helped instill passion for a western lifestyle that has been passed along to their 13 grandchildren and nine great grandchildren.

As their sons’ love for horses grew, so did their interest in western events. the They were 4-H members, raising animals and competing in 4-H shows, as well as youth, high school, college, open, (NRA) Northern Rodeo Association and PRCA (Professional Rodeo Cowboy Association) rodeos. Those late nights that Rodger and Sheila spent training horses paid off when each of the boys received financial assistance in college as members of rodeo teams.

When it comes to rodeo, Sheila and Rodger have had their hands in just about every aspect of it and more. Rodger is an active member of the East Helena Rodeo Club (EHVRA) for 45 years serving as President, Vice President, and Advisor to the Board. Sheila a 35-year member of the EHVRA and has served as Secretary, Treasurer, Chairman of Advertising, Public and Media Relations, News Coordinator, In-county Rodeo Judge, timer, and sold concessions when needed. Rodger was the EHVRA representative that was instrumental in the Montana Rodeo Association joining with the NRA. He also served as the Western Committee Representative for the NRA for 17 years. Rodger held the position of President of the NRA from 2003 through 2007 and then became an Advisor to the board for many years after. Sheila has done absolutely everything in the rodeo arena but compete as a contestant. She also has the distinct honor of being the only approved woman to judge in the NRA. Together they judged high school, open, and NRA rodeos. They were recognized as the NRA Personalities of the Year in 1989.

In response to a question by one of her granddaughters as to “Why her and Grampa have been associated with and given so much to the sport of rodeo for the past 50 years,” Grandma Sheila says, “It is because of the support our sons received from so many people while developing their talents and skills in the sport of rodeo, the financial support they received for the boys’ educations and the opportunity to make lifelong family friends”. A glimpse of Rodger and Sheila’s license plate reflects the sentiment of their outlook on how life has treated them - it reads, PRRFECT. The simple, slightly imperfect plate is a reflection of the word one will hear whenever someone asks Rodger how he is doing.

In the beginning, Rodger and Sheila quickly knew they were a PRRFECT match, but what they did not know was the positive impact that their love of the western way of life and the sport of rodeo would have on their family, friends, community and the state of Montana.