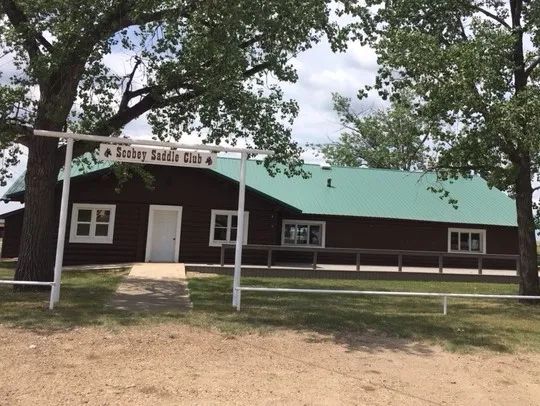 The foundation for the Scobey Saddle Club began in 1937 when an informal group of twelve local individuals started a social club. They began meeting near a spot known as Stoney Point, a sandstone outcropping overlooking the East Fork of the Poplar River north of town. Many times, the men would ride there on horseback and the ladies would arrive later by car with picnic lunches. When the weather did not permit gathering at Stoney Point, they met at one of the gentlemen’s barns on the outskirts of town.

From these humble beginnings an idea took shape to create a more formal outfit. These seeds of ideas would one day grow into something the community would be proud to call their own. However, that would have to wait as December 1941 changed everything for everyone including some of those involved who went to war and those involved in the war effort back home.

When World War II ended and “Johnnie came marching home”, the returnees were ready to take on the world and, in the fall of 1944, meetings were held to organize as the Scobey Saddle Club. In January of 1945 the first official officers were elected to serve the membership. The group soon outgrew the barn meetings and began assembling in the Legion Hall in downtown Scobey.

One of the first projects they undertook was to ramrod a plan to repair and rebuild the Daniels County Fairgrounds which had fallen into shambles during the depression and wartime. Club members built a graded racetrack as well as bleachers and the barn which are in use today. The Scobey Saddle Club also convinced the County Commissioners to appoint a Fair Board.

In 1946, the Saddle Club began hosting horse racing at the fairgrounds track. Many of the local members were involved in the races as well as competitors from around Montana and southern Saskatchewan. The horse races continued until the year 1962. Chuckwagon and chariot races were also a large part of the race card during this time.

While busy with many of these activities, plans for a clubhouse that had been proceeding were finalized in 1948 when a building committee was appointed. One of the first steps was to commission some men from the area who were logging in Western Montana to cut timber for the new authentic log clubhouse which included open log gable trusses. Much of the construction was done through the winter with temperatures in the minus 20’s and 30’s. At times, the volunteer crew was forced to remove their gloves to start nails and then “glove up” to drive the nails home. The building includes a hardwood dancefloor and a fireplace. With the exception of an added storage room, and modernizing the kitchen and restrooms, the building is nearly the same as it was when it was originally constructed.

The Saddle Club became the “go to” place for hundreds if not thousands of activities over the years: weddings and receptions, class and family reunions, community meetings, dances, the annual Fireman’s Ball and even funerals.

In 1950, a fundraising breakfast, for sustainability was instituted the first Sunday in June and still continues. For many years it included a Queen Contest and the list of winners is a virtual Who’s Who of Eastern Montana horsewomen.

The Saddle Club has also served as a venue for many musical events which included famous performers of their day - T. Texas Tyler, Jeannie Shepperd and Tex Williams to name a few.

In 1953, the Fair Board asked the Saddle Club to act as a sponsor for a new event called “Auto Polo” (an arena event much like soccer that involved automobiles with roll cages, six-foot rubber balls and a competitive driver) to be held during the Daniels County Fair. Although it was very popular it ran for only two years as the cost of the balls became too expensive at nearly $75.

In 1971, members organized the first Eastern Montana Wagon Train. The club purchased a team of black draft horses which led the train for the next ten years. The Wagon Train still continues today but is now its own established entity.

From its humble beginnings the Scobey Saddle Club has persevered and prospered as volunteers made it into the icon that it has become not only for the Scobey community but for Daniels County and all of Eastern Montana. It has been and will continue to be a leader of establishments and organizations in Scobey, Montana for years to come.