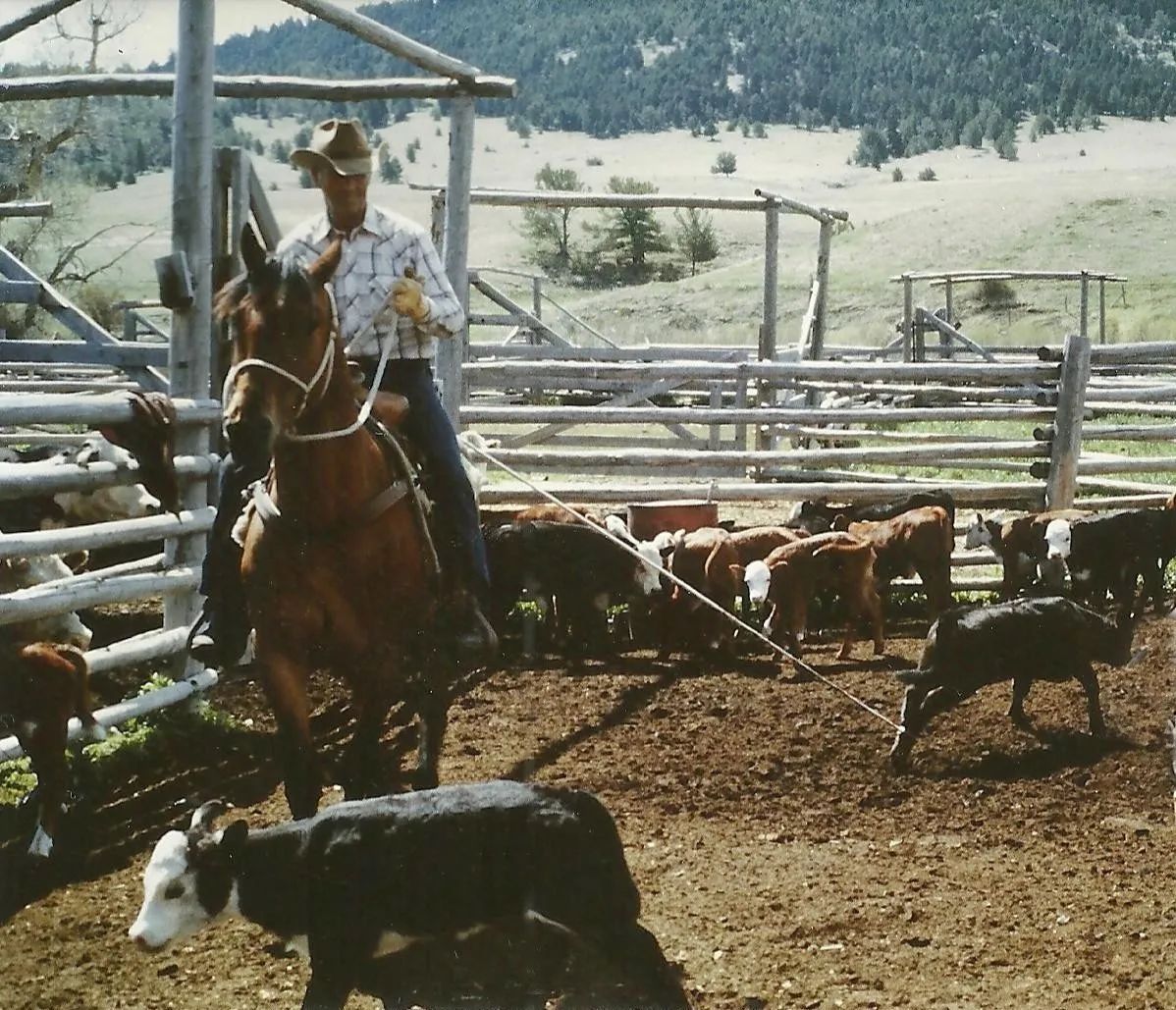 John Leonard “Jack” Short was born June 7, 1921, at his grandmother Phoebe Fuller’s homestead in Meagher County west of White Sulphur Springs, Montana. He spent his early years on the ranch of his parents, John and Ida (Fuller) Short, on Butte Creek north of town working with both cattle and sheep. In 1935, after graduating from 8th grade, Jack left home and set out on his own. At age14, he began his life long career as a cowboy when he went to work breaking horses and working with cattle on area ranches, including the A.B. Cook Ranch and the Ringling outfit.

In 1942, Jack joined the United States Army, where he served until an injury led to a medical discharge. After recuperating he returned to Montana and his life as a cowboy.

Soon after Jack returned home, an accident with a bronc involving a spur which caught in the horse’s mane resulted in a badly broken leg that required a lengthy recovery at the Zehntner Ranch. During that time Jack fell in love with Julia Zehntner and they were married in 1944. Together they raised a family and a constant stream of horses with roached manes and long forelock.

Jack was instrumental in organizing the Meagher County Rodeo Club. He was a long-time member and elected the first president. In the club’s early years, wild horses from the Rankin Ranch were used as the rough stock for the rodeo. The horses were rounded up on the range near Lingshire, Montana, and driven some 40 miles into White Sulphur Springs, Montana. One year on roundup, Jack’s horse fell with him fracturing his ribs in 14 places, pushing through the pain, he served as pickup man for the rodeo. Jack was never a rodeo contestant, but his saddle horses were often used for bucking practice, and he continued to pick up for many years. Another year Jack was riding a big sorrel horse he had purchased from a man named Horse Rady, the owner of a string of rough stock. Jack picked up a cowboy who said, “Had I recognized the S.O.B. you were riding, I would have stayed on the saddle bronc!” It turned out that ‘Slim’ had been one of the more cantankerous horses in Rady’s string.

Jack had a special gift when it came to breaking spoiled horses. He could take the meanest, nastiest bronc, and with time have them reining better and walking faster than anyone else’s horse. On several occasions, a riding partner complained that Jack’s horses always walked faster. Jack would then swap horses with the partner but soon the new horse would be in the lead anyway. He often bought horses from the loose stock at the sales ring where one could buy a nice-looking horse for little money. They were sometimes wild, and was once asked why he wasn’t afraid to get on an ‘outlaw’ horse, Jack replied, “I’ve never walked up to a horse that I didn’t think I could ride” and then smiled and added, “I’ve often been wrong.”

Having a natural way with animals he broke mules to drive and ride; he liked their smooth gait and every now and then he showed up at a branding or gathering riding a mule instead of a horse. Jack also trained remarkable cow dogs. He and his dog could gather and move more cows than most crews, as he seemed to know what a cow was going to do before the cow did. He was the one ranchers called when they had an unruly bull to gather, for he loved the challenge of getting the animal where it needed to be.

Like most cowboys, Jack enjoyed using a rope. He and his cousin, Elmer, once headed and heeled a yearling bear. Elmer’s rope came off, but Jack had to climb a tree to get his. He retrieved the rope, but ended up covered in berries that had been digested through a frightened bear.

Jack worked on many ranches in Meagher County. If it was necessary to leave a ranch he was never a day without a job. Because of his work ethic and talent as a cowhand, he was welcomed back to any place he’d been. His work day usually began before daybreak and ended after dark. Jack treated the ranches he worked on and the stock he cared for as he would his own. He went to every effort to save a calf. The family once woke up to nine baby calves in the kitchen, because it was 40 below outside and there was no calving shed on the place he was working.

In Jack’s world, the animals were taken care of before the people. Nobody was lower, in his opinion, than someone who ate before the horses were fed, unless it was someone who didn’t feed their animals enough.

No matter what the plan was or if he had the day off, Jack fed the cows on Christmas morning, simply because he liked to make sure they received a little extra feed on such a special day.

Jack was talented at every aspect of working on a ranch. He was a great cowhand, but he could also operate any machine he was put on. He didn’t mind fencing, especially if he could do it on a horse. Paul Ringling once needed a sheepherder, when Jack was working on the Ringling Ranch. He agreed to do so if he could break horses while herding the sheep. Paul accepted the deal, but the other sheepherders never did think much of Jack’s way of herding.

Jack’s idea of a vacation was taking a couple of days off to help at one of the ranches his sons were on. He never took a trip unless it involved buying, selling, or trading a horse.

Four children were fortunate enough to call Jack Short, ‘Dad’. To them he was their hero – for they always felt taller standing next to him. Jack’s family and friends bid him farewell on January 10, 1984 at the age of 62. He died after a day of skidding logs with a team he was breaking. Unharnessing the team, he turned them toward pasture and slapped one on the butt as it went through the gate. Jack dropped to the ground and died of a sudden heart attack. Thus, he fulfilled the wish of most cowboys by dying with his boots on.

Jack lived a full life in a short time leaving behind a wife, his children, eight grandchildren and countless friends who still long for his company. His ashes were scattered over the mountains and land that he loved.

In summing up Jack’s life it could be said that Jack Short loved children, animals, and nature. He cherished his friends, worked hard, played hard, and personified the word “Cowboy.”

Reference: Memories of the Jack Short family and friends