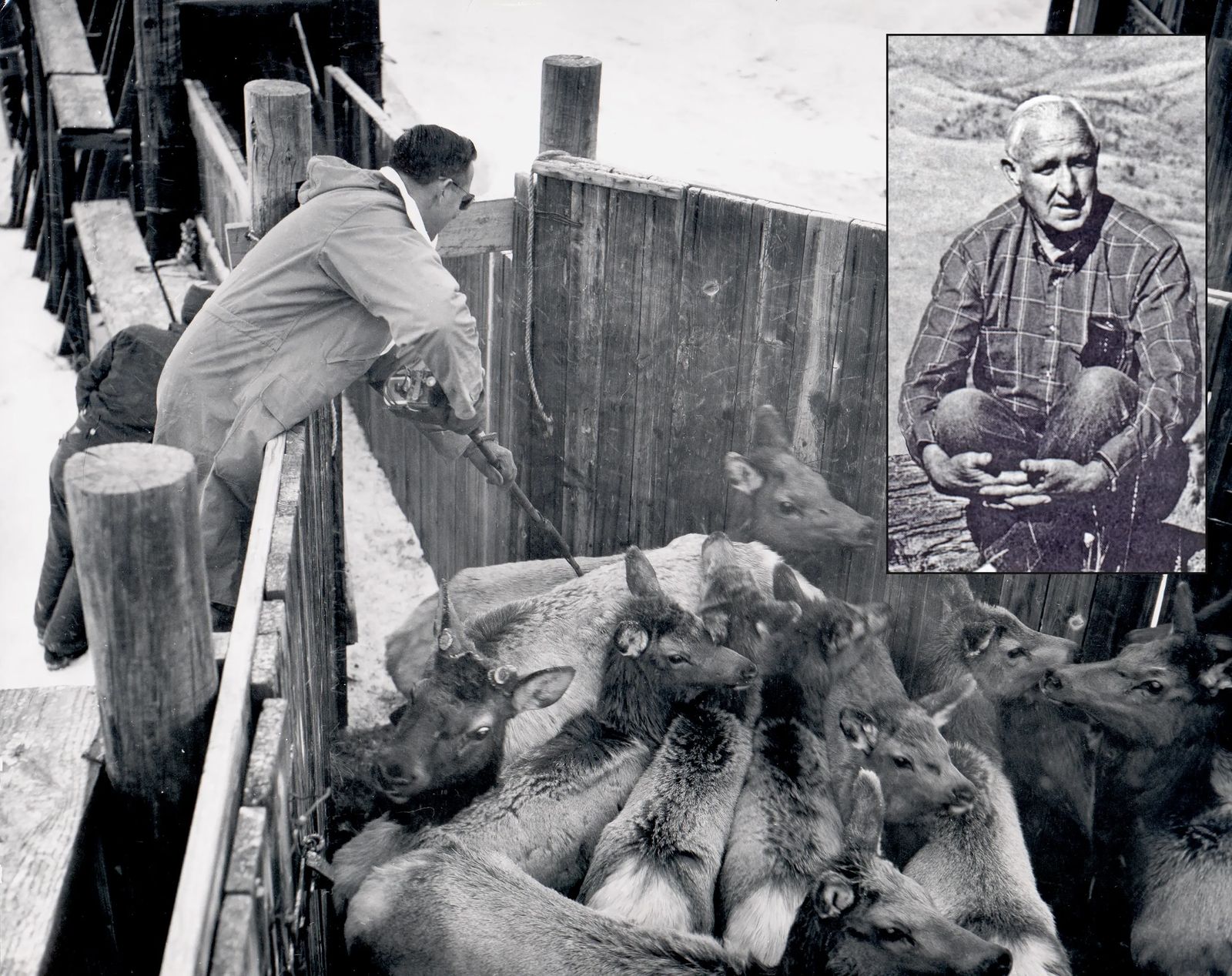 James J. “Jim” McLucas was born April 13, 1921, in Butte, Montana. By slightly modifying his birth date, Jim enlisted in the United States Marine Corp at the age of 17 -- instead of the required age of 18. He remained in the Marines until the end of World War II. Jim was hit by shrapnel during combat in the Battle of Iwo Jima. The wound never completely healed and was treated and bandaged every day for the rest of his life.

After the war, he returned to Montana to work with the Montana Fish and Game Department doing predator control. By 1947, that job evolved into the position of Montana's first big game trapper. Montana's wildlife populations were on the rebound from the market hunting days, but many important habitats were devoid of wildlife. During Jim’s nearly four decades of work, official Montana state records show that he trapped and relocated more than 16,000 big game animals.

Jim set about his job with a vengeance, developing and then testing techniques for capture. During those early years, little information on wildlife trapping techniques was available, so Jim and his contemporaries created the procedure. From designing crates for transporting mountain goats by raft down the South Fork of the Flathead River to strapping goats to the sides of packhorses, everything was a new adventure and invention.

Jim often worked alone. The effort would start in the evening by placing salt or hay into an enclosure. Then, in the morning, as bighorn sheep or mountain goats fed their way into the trap, Jim would trip the trap door closed. But that was seldom the end of the story. On one occasion, he had a mountain goat in the trap. Just as he went in to capture the billy and put him in a crate, the goat made a break for the door. Jim grabbed the powerful, sure-footed, and nearly 200-pound mountain goat by the horns as it ran past -- and out the gate they went. The goat drug Jim down a nearby shale slope until he finally got the critter stopped. The two lay upon the scree, eye-to-eye and side-by-side, each gasping to catch a breath. Once the goat regained his wind, away they went again. This time, however, the goat ran right back up the hill, through the gate and into the trap.

In another instance, Jim set a different trap baited with salt for mountain goats then camped nearby for the night. Jim recollected, "So, I'm walking up the trail (the next morning) and here's a big old grizzly track going up the trail. So, I'm pretty cautious; the game trail turned into where the trap was. So, I’m looking real careful. I could see a rag-horn bull elk had gotten into the trap. The grizzly had come, killed the bull and was feeding on the carcass.” Needless to say, that morning Jim didn't trip the trap gate. With the scent of grizzly about, he knew that would be the end of goat trapping there for a while. "I waited for the grizzly to leave and drug off the remainder of the elk carcass away," he said. "Then I got the hell out of there.”

Jim consistently worked to develop ways to improve the efficiency of his trap designs and enhance the humane treatment of the wildlife he encountered. In 1975, Jim's bighorn sheep trapping and transplanting techniques caught the eye of the producers of the popular television show "Mutual of Omaha's the Wild Kingdom" hosted by Marlin Perkins.

Without Jim and some of his coworkers’ ideas and inventions, today’s knowledge about the capture of animals would not be as complete. Jim's most notable skill, though, was his ability to get along and work with a wide variety of people. Bob Cooney, Jim’s supervisor during those early years once said that Jim was the very best in public relations the department ever had.

After Jim had retired, he spent the ensuing years assembling a photo archive documenting the trapping and transplant efforts that took place between 1910 and World War II. Jim was a major reference and contributor for the production of the film Back from the Brink and the accompanying book Montana’s Wildlife Legacy.

In 1962, Jim married Victoria Ann Johnson. Jim became Dad to her three children: Chrystal, Mark, and Ronda. From their union, daughter Kim, joined the family. Jim and Vicky enjoyed taking their children and grandchildren on many outdoor family adventures.

Jim was a kind and humble man who was always quick to deflect praise and willingly gave credit to others. Jim didn’t see his work as being about him, but about restoring Montana's wildlife to their original ranges. Montana's rich and diverse wildlife resource we enjoy today, is in part due to his original and dedicated work. James J. “Jim” McLucas personifies “The Greatest Generation.”