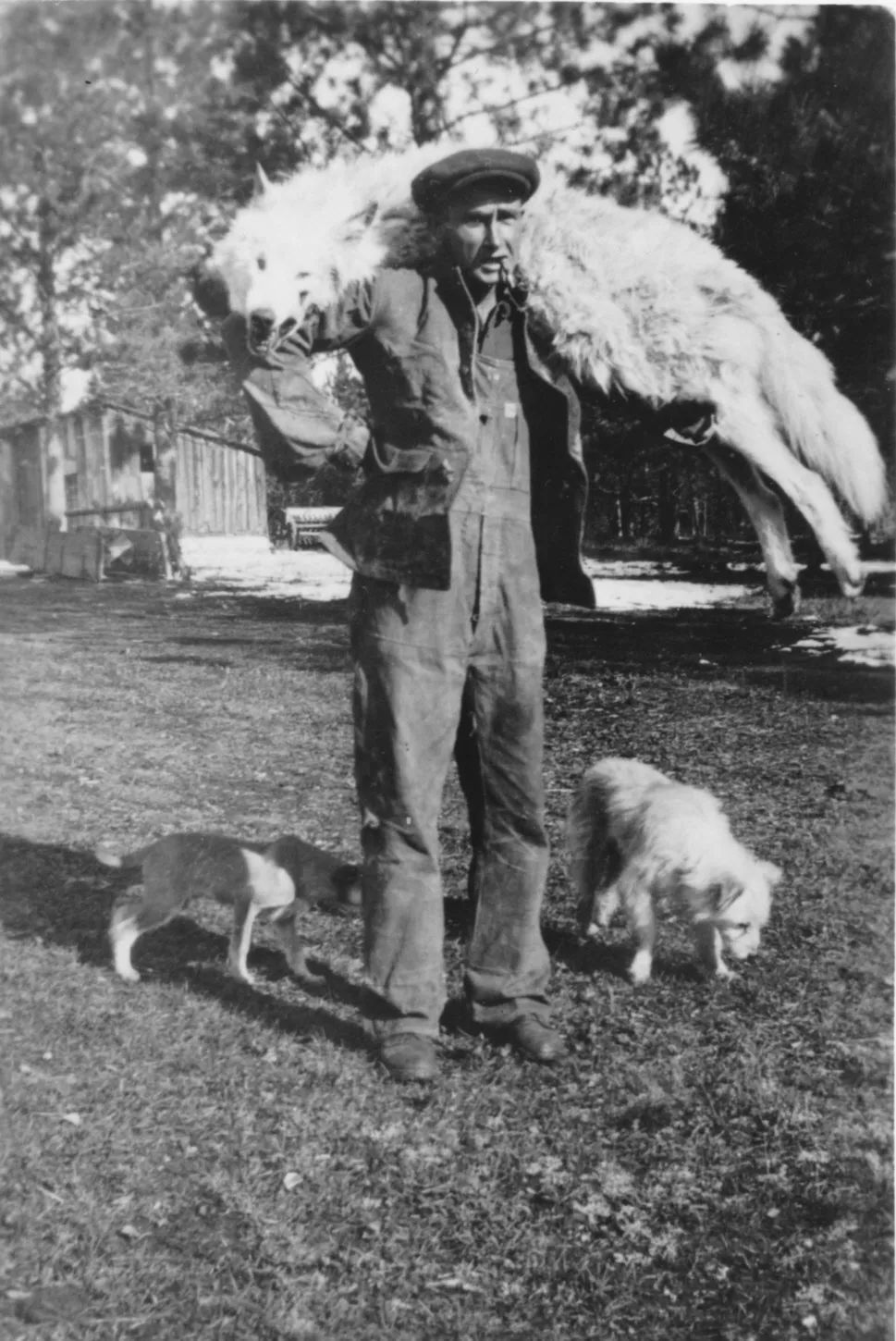 The legendary white wolf of the Judith Basin was first sighted in 1915. Five years later, he was routinely plundering herds of cattle and sheep, but only a few of the Basin’s stockmen actually laid eyes on him. Earl Neill was one of them. In 1926, Neill, after shooting the wolf in the left hind leg, a wound that permanently crippled him, the wolf gathered himself on his three good legs and sprinted to a snowdrift in which he vanished. Neill insisted the maneuver was deliberate and that the wolf well understood the snowdrift’s protective camouflage.

In February of 1930, A.V. Cheney had his own extraordinary encounter with White Wolf. He heard his dogs barking hysterically in the distance, saddled his horse and rode toward the commotion. Cheney was thunderstruck by what he saw: his five Russian wolfhounds and the wolf were engaged in a fierce battle. Cheney didn’t have a firearm, but he did have a rope. He tried to lasso White Wolf but missed, and White Wolf got away again.

Stockmen across the Basin swore the wolf possessed a “superior intelligence.” He was wise to the smell of steel, they said, and could figure out whether or not a trap was cocked. “He’d come within 30 feet of a set trap, but he’d never get any closer, even if it were buried in the snow or dirt,” explained Al Close, a rancher and a trapper. “He’d walk right up to one that was sprung and use it for a fireplug.”

When the men gathered in bars, they swapped yarns about the wolf and wagered on how long he would last. Mothers threatened naughty children with a visit from the wolf. A worried grandmother wrote from Iowa, “Keep those children near the house until somebody kills that terrible wolf.” Elva Wineman, the librarian in Stanford, Montana, wrote articles about the Basin’s “wolf war” for The Denver Post and Great Falls Tribune. The Associated Press picked up Elva’s stories, and news of the marauding wolf went national.

Professional hunters and trappers showed up. On horseback and on snowshoes, with airplanes and with dogs, they pursued the wolf. He outwitted them all. The renegade wolf was costing Judith Basin stockmen thousands of dollars. One exasperated rancher described his sheep herd as “mowed down like grain.” By 1930, fifteen years after White Wolf was first sighted, the cattle and sheep lost to his brutish raids were valued at $30,000.

Years of endless pursuit finally caught up with White Wolf. On May 5, 1930, Earl Neill spotted him once more. He hurried to tell Al Close, and the two men and two savvy dogs followed White Wolf’s trail across skiffs of snow and into heavy stands of timber. In a small patch of fir, the dogs found the bedded wolf. They rushed in and the wolf rushed out. The animals clawed and bit and snarled their way down a hill. The dogs kept pushing White Wolf toward Close, who had hidden behind a tree. From about 40 yards, Close stepped out from behind the tree, raised his Winchester. The bullet he fired penetrated the wolf’s skull, just below the left eye. The wolf collapsed. Paralyzed but still alive, the wolf snarled at Close and waited. Close fired again.

White Wolf weighed 83 pounds and measured six feet from nose to tail. His teeth were chipped and worn. His age was estimated at 18 years—a venerable age for a wolf. The stockmen had loathed him, but they had grown to respect his cunning ways. He was too noble an animal to bury and forget, they agreed. So, they had him mounted. The legendary White Wolf achieved immortality in Stanford where he’s on display at the Basin Trading Post. He’s the town’s leading tourist attraction.

Several years after the final hunt, Al Close recalled the moments before he shot White Wolf: “I almost didn’t shoot because I thought, ‘What a shame to kill such a smart fellow.’ It was the hardest thing I think I ever did. I knew it was the cruel nature of the wilderness, the fight for survival that had made him the ferocious hunter that he was. But I came to and let the bullet fly fairly into the face of the old criminal.”