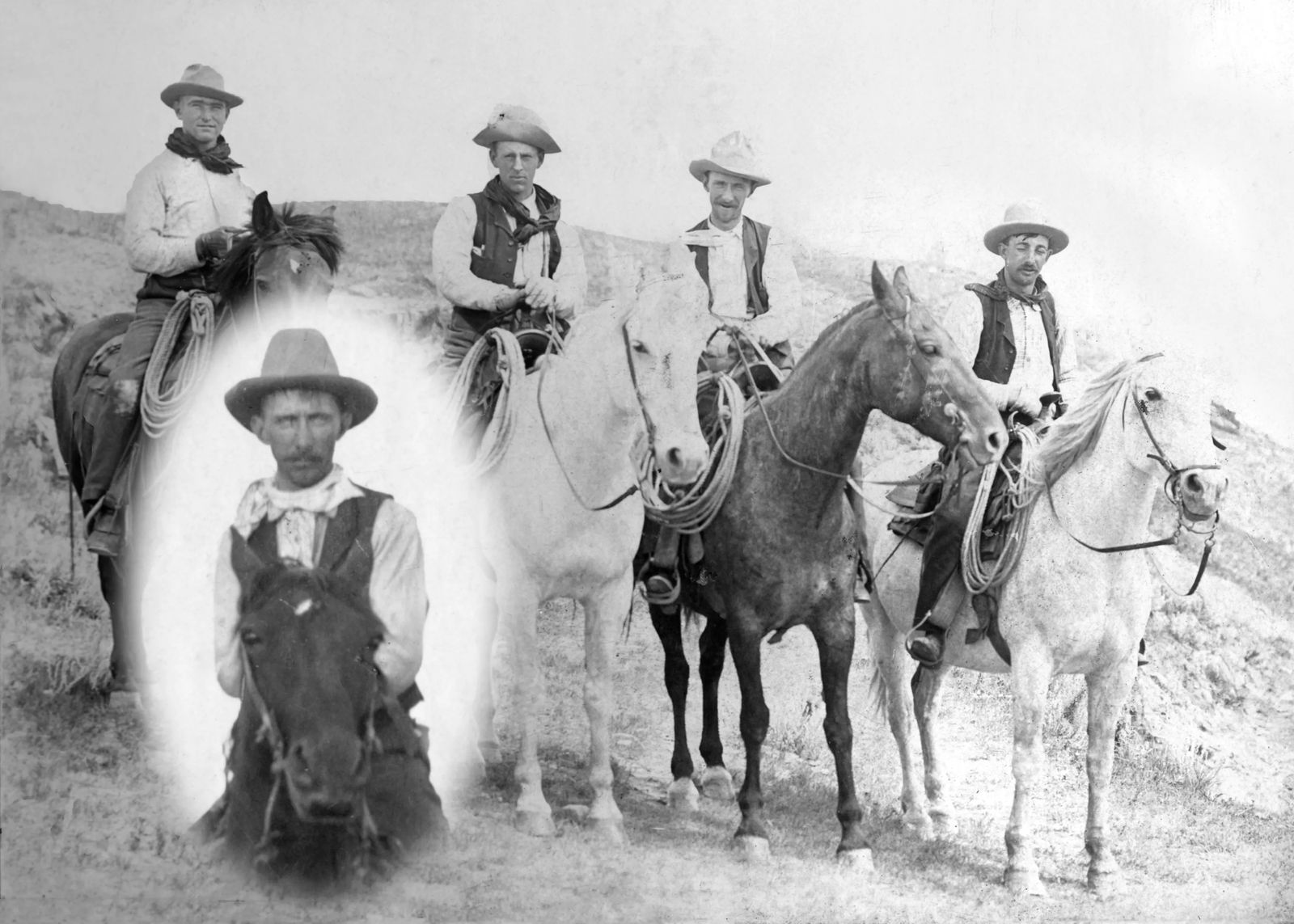 Melvin L. Cheney was born in 1877 in LaHarpe, Illinois, a son of Linas and Hannoria (Considine) Cheney. His father, Linas, served in the Civil War in the 7th regiment, Iowa Company D and was with Sherman on his march to the sea. His mother, Hannoria, emigrated during the potato famine from Ennis, Ireland.

About 1890, Melvin came to Montana with his parents, arriving near Stanford in what is now Judith Basin County. They joined Melvin’s sister and brother-in-law, Perry and Ella Westfall, at their ranch just west of Stanford. Melvin joined his brother, Ambrose, and their half-brother, Gerard Berges, as cowboys with the Judith Basin Pool based in Utica. The pool was started in 1885 and provided cowboys for large cattle owners whose herds, up to 70,000 head, grazed unfenced land. At one time the pool was comprised of 400 horses with 40 clear-cut brands. Over time, Melvin’s duties included night herder, riding circle, cutting and roping.

There were some colorful characters in the pool including Kid Curry of the Wild Bunch/Hole in the Wall Gang and future artist Charlie Russell. Melvin related that stories of Kid Curry were not exaggerated, and that he was part of a posse sent after the Curry gang. Melvin remembered that neither he, or anyone else in the posse, were too anxious to find the gang. Another of Melvin’s stories told of a cowboy asking Charlie to do an animal model in clay for $10, about a quarter of the cowboy’s monthly pay. When Charlie was done, the cowboy only wanted to pay $5 so Charlie rolled the clay into a ball, broke it in half and made one half the size. This made a fine story around the campfires. Melvin also talked of finding scattered scraps of Charlie’s drawings, which he and his fellow cowboys threw into the campfire when they cleaned up camp. Melvin and Charlie remained friends and in later years, Melvin would visit Charlie at his studio in Great Falls.

In the early 1890s, there were sheep and fences moving into the Judith Basin, and the cattle in the pool were moved north to the Milk River country where they joined the newly formed Bear Paw Pool based out of Lloyd near Chinook, Montana. This pool eventually managed up to 150,000 head of cattle. Melvin, his brothers, and others, including Curry and Russell, moved Judith Basin cattle north. The drive included a treacherous Missouri River crossing at Judith Landing. In the summers of 1890 and 1891, they trailed nearly 100,000 head across the Missouri with no major accidents. In the winters, Melvin was fortunate to have a family ranch to return to as many of the cowboys had to find someone to take them in or hole up wherever they could find an old, deserted cabin. It was well known that the cowboys, once settled in for the winter, would be sure to have stocked enough whiskey and playing cards.

By about 1900, the days of the open range were over. The Cheney men staked their claim at the foot of Wolf Butte west of Stanford. They built a small log house with a sod roof where they lived as bachelors. After Melvin and Ambrose, or “Amby”, became interested in particular young women living in the area, they ‘remodeled’ the cabin, adding a shingled roof and windows.

Melvin met Grace McGiffin, who was teaching at the nearby Fish School on Otter Creek. In 1880, her family settled in the Sand Coulee area where they ranched and later developed coalmines. Melvin and Grace were married in 1907. Amby married Grace’s sister, Bess McGiffin, and the two families lived at the Wolf Butte ranch for many years. Over the years, Melvin’s parents joined them, as did Grace’s father Nathaniel, and her brother, Tom. All of them lived out their lives at the ranch.

Melvin and Grace raised five content and healthy children in a small log cabin they constructed on Upper Surprise Creek. Doc Williams who lived in nearby Spring Coulee delivered all the children and was paid for his life saving efforts with hay and grain.

Between the two families, 13 children were born and were quite a presence on the creek. The children learned to ranch, hunt and fish, trap, garden and can food. The children and their neighboring friends were taught in a log schoolhouse at the ranch. The Cheney’s invited the community to ranch rodeos, picnics, regular Sunday baseball games and the occasional church service offered by a traveling minister.

The main ranch operation was known as the Cheney Brothers Cattle Company. This operation eventually encompassed several thousand acres at the foot of Wolf Butte and a few thousand acres of grazing rights. The Cheney Brothers participated in the largest cattle shipment ever made from Stanford, in 1925, along with the Taylors, Goyins and Hugheses. Melvin traveled to Chicago with the cattle, as many did, to look after the animals’ welfare and ensure a profitable sale. The only story that survives from that trip has Melvin going to a beef processing plant in Chicago where he saw hot dogs being made and decided to limit himself to steak from then on. Another occasion, Melvin believed his best cattle dog hopped the cattle train they were loading, unbeknownst to him, and sadly was never seen again. There was always a cattle-shipping party at the ranch, which included a big dinner, neighbors, singing and dancing. Melvin played the mouth harp and chords on the piano.

In later years, Melvin and Grace sold their land at the Wolf Butte Ranch and bought the 1,600-acre Westfall Ranch closer to Stanford, which became a new home for children and grandchildren alike. Melvin, alongside his friends and neighbors, built a strong and successful community. Judith Basin County bred strong people with big hearts – as it still does today.

Melvin and Grace are buried in Stanford along with eight family members who also shared treasured days at the Wolf Butte Ranch.

Gunderson, Robert, The Ancestry of Ambrose and Melvin Cheney, unpublished, 2010.