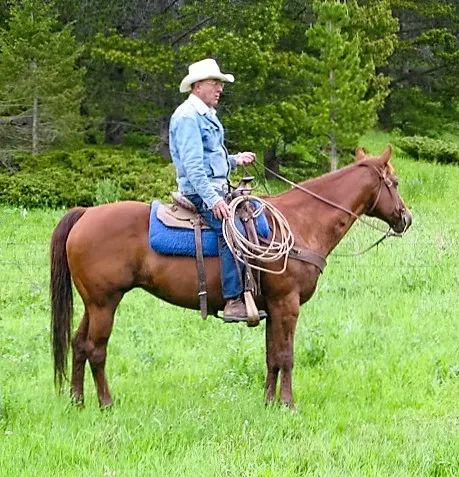 Edgar E. Lewis was born in 1930 on the family ranch north of Lavina, Montana to Victor and Lena Lewis, the youngest of seven children. He went to school in a one-room country schoolhouse and attended Lavina High School.

In 1942, his oldest brothers went into the Army leaving Edgar, another brother and Edgar’s dad to take care of the ranch. They did all the haying, feeding, and farming with horses.

At age ten, Edgar and his dad trailed their cattle from the home place to a Forest Reserve summer lease in Swimming Woman Canyon. They would bring a pack horse with them to carry the salt and any provisions they would need for this five-day round trip. Today the cattle are still trailed to Swimming Woman for the summer, but now that they have pickups and horse trailers, it is not quite the adventure it was 75 years ago! Times were hard growing up, and there was little money, but the whole family worked hard to raise and grow their own food. However, they did not eat the cattle they raised as that money was needed to make their land payment. The cattle were trailed to Lavina where they were shipped to market in Chicago via the railroad. Edgar recalls one year the cattle did not bring enough to pay the freight, so Edgar and his siblings milked cows to help make ends meet. They would sell the cream, and his mother would make cottage cheese and butter to sell also. The money they made from that would help buy clothes and other essentials for the family.

But even though Edgar and his family worked hard all year, and some years had very little to show for it, Edgar loved the ranch and way of life. So it was no surprise that he would come back to the ranch after serving in the Korean War. After he was discharged from the army in 1954 and returning to the ranch, he told his dad there was a ranch for sale 25 miles north in the Snowy Mountains. They could summer the cattle there and the pastures could be hayed. Edgar wanted to buy it but his dad thought he was crazy; it was $20 an acre! However, Edgar got his dream of summering his cattle in the mountains. He still spends his summers up there with his cattle and his wife, Anna, of 62 years. So for the last 60 plus years, all the cattle have been trailed up the county road to the mountains on horseback with Edgar in the lead. Early on, two of Edgar’s older brothers ranched with him, and he had four nephews that would help with the bi-annual trail drives. As Edgar’s four children got old enough they became the riders for the two-day trip. Along the way the riders could enjoy the beautiful mountains surrounding them and the sound of Edgar yodeling as he drove his cattle to summer pasture.

Haying in the summer was labor intensive as the entire hay crop was put up as small square bales and was stacked by hand. That meant the hay crop in the mountains had to be stacked twice because it was hauled down to the lower ranch for the winter. Edgar needed to hire extra help in the summer to get this work done but says it was never a problem finding someone to do the job. You see, Anna has quite a reputation as a good cook so all the high school boys were anxious to stack bales because they knew that three meals a day of Anna's home cooking was part of their pay. Edgar says Anna is the single most important reason he has been able to ranch successfully all these years. He says he never could have accomplished all that he has without her by his side helping and supporting him along the way.

Though not nearly as important as a good wife, a good horse is part of the equation also. Edgar has had a number of horses through the years but probably his favorite was his palomino named Buck. This horse would load up in the back of a pickup (and a stock rack was optional). One day Edgar stopped to visit a neighbor with Buck in the back of the pickup without the rack. Buck must have thought Edgar was taking too long so he jumped out of the pickup and headed down the road toward home. Edgar was pretty surprised when he came out of his neighbor’s house to find his pickup still there but no horse in the back!

At 86, Edgar is one of the finest riders you will ever see. He and his mare, Shantel, spend a lot of hours together in the fall gathering cattle. When Edgar mounts that horse, it is like he is 40 years younger. He carries himself so well in the saddle that it is hard to tell the difference between him and his son, John, when they are riding side by side.

Edgar also felt it was important to serve his community and support the organizations that helped strengthen agriculture. He served on the Board of Directors for Montana Livestock Ag Credit from 1986 to 1998, with two of those years as Chairman of the Board. He served Golden Valley County as Commissioner from 1989 to 2002. He is a member of the Golden Valley Stockgrowers and the Montana Stockgrowers Association where he served on the Executive Committee for four years. He is a member of the Montana Farm Bureau and served as a Director for them for four years. From 1977 to 1991, he served on the Montana Beef Council. In addition, he also represented Montana on the National Cattleman's Beef Promotion and Research Board from 1986 to 1991. He is a lifetime Mason and a lifelong rancher.