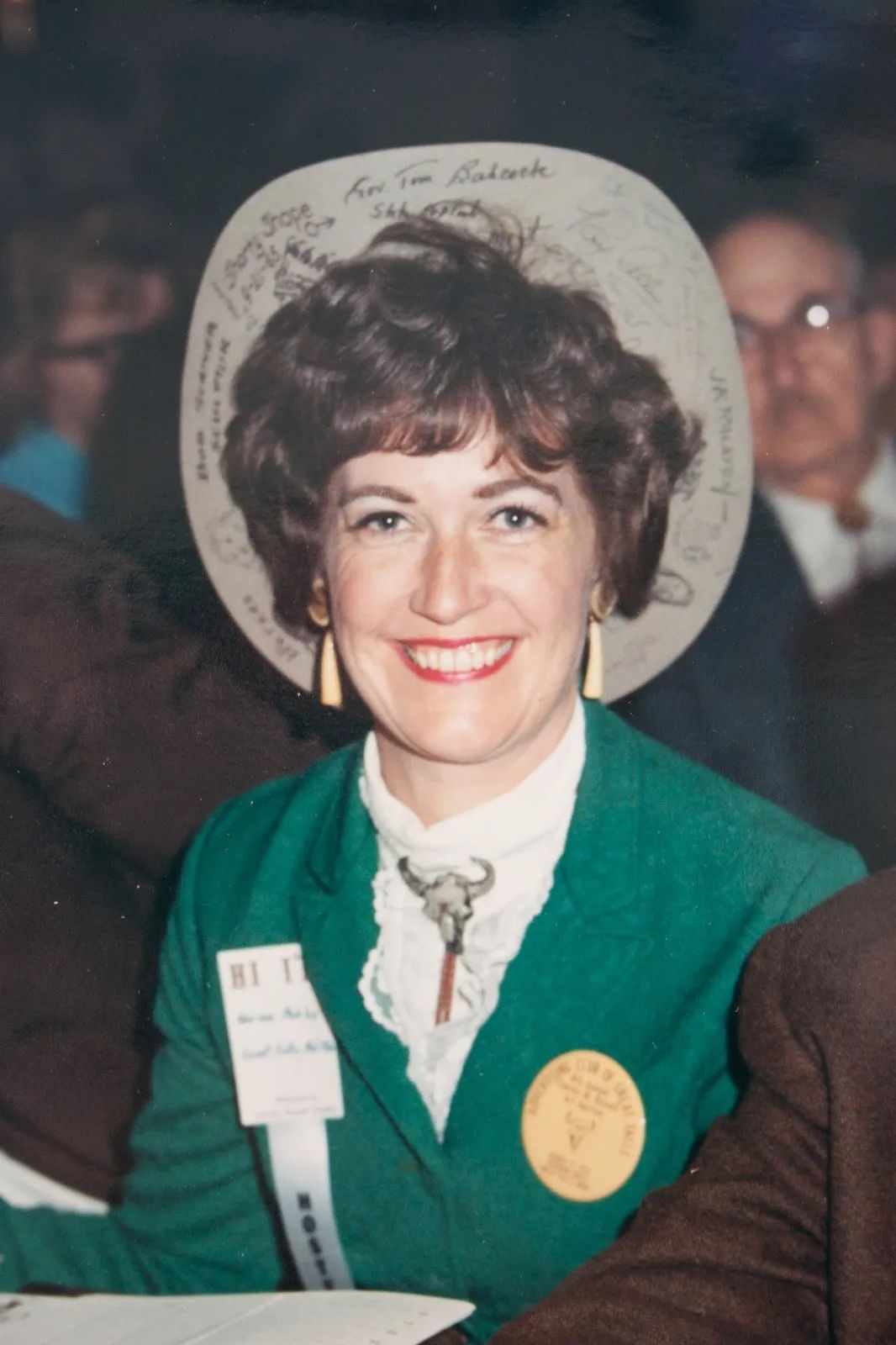 For decades, Norma Ashby has been a pioneer for the Western way of life through art, television, and various state and community organizations. She was born in Helena, Montana in 1935 to parents Ray and Ella (Lamb) Beatty and raised on their family ranch near Winston, Montana. Many know Ashby as the co-host of Today in Montana, a live talk show that was broadcast for 26 years by Great Falls’ KRTV. Over the years, Ashby interviewed a wide range of local and nationally known celebrities, including Pat Nixon, Johnny Cash, and Clint Eastwood. Ashby’s favorite guest was Bob Hope but her most notable guest was Raynesford rancher Cyril Colarchek, who gutted a live rattlesnake on air, spilling thirteen live hatchlings onto the set. Many of these adventures in broadcasting are detailed in Ashby’s memoir, appropriately titled Movie Stars and Rattlesnakes: The Heyday of Montana Live Television.

Writing has long been a passion of Ashby’s. In fact, a high school assignment is one of the first pieces of writing she remembers being proud of. The class was asked to biograph a prolific Montanan and Ashby chose her great grandfather, George Beatty, who arrived in Bannack in 1862 and lived an extraordinary life as the first homesteader in Broadwater County. Ashby would emulate this pioneering spirit throughout her life and followed her passion for writing to the University of Montana, where she graduated with a degree in journalism.

After college, Ashby spent four years in New York working for LIFE and MD Medical Newsmagazine. And though she was satisfied with her work, she became quite homesick for Montana. Obviously, the Big Apple was nothing like rural life and she had a feeling she wasn’t the only resident of New York who felt this way. So, she founded the Montana Club of New York. It quickly grew to 700 members.

One of the members was none other than NBC newscaster Chet Huntley. Ashby would return to Montana to become a broadcaster herself, and during her work on Today in Montana, Ashby produced 22 TV documentaries, one of which Huntley narrated.

There were many highpoints like this in Ashby’s career. For instance, it was she who prompted an informal citizen’s election to pick the Montana state fish - the winning candidate being the cutthroat trout.

Another highlight was being drawn as a character in an official Latigo comic strip by Stan Lynde.

Perhaps the most meaningful honor given to Ashby was being adopted into the Blackfeet Tribe. She had long been a friend of Chief Earl Old Person and was given the name “Thunder Woman.” It was a fitting name; thunder signifies unseen power in Blackfeet culture and as a TV personality, Ashby had harnessed the power of the airwaves to bring joy, education, and culture to thousands.

Apart from her life in TV, Ashby’s contributions to the state have had lasting effects, particularly her involvement in the C.M. Russell Art Auction of Great Falls, an event that has endured nearly 50 years and spawned an entire week celebrating the Western way of life through art.

“I thought of the person who brought more fame to our city than anyone,” Ashby remembers. “I confidently proposed the idea of celebrating Charlie Russell to the Ad Club. The board looked at me with blank faces. They asked, ‘Who would want to celebrate a dead artist?’”

Ashby brainstormed with the Ad Club president and vice president and came up with the idea for an auction that would not only honor Charlie Russell but also showcase up-and-coming Western artists, with proceeds benefitting both the Ad Club and the Russell Gallery (now the C.M. Russell Museum). When the trio presented their idea to the Ad Club board, Ashby says they replied, “Okay, we’ll try this once . . .”

Nearly five decades later, the Russell Auction is still going strong. It has since evolved into Western Art Week, a five-day event that incorporates more than a dozen art shows and several gallery exhibitions, spread throughout the city. Artists and collectors from all over the world travel to participate in the many events. In fact, Western Art Week is so significant that in 1985, representatives of National Geographic arrived in Great Falls to cover it. In the January 1986 issue of National Geographic (Volume 169, Number 1), Bart McDowell writes, “The C.M. Russell Auction of Original Western Art in Great Falls, Montana, once a year and for a brief weekend turns Charlie’s hometown into one of the world’s most lucrative art markets.” The article spans 36 pages, with images of Russell’s work, historical photographs, and photos by National Geographic’s Sam Abell. A twelve-page article about Western Art Week and Ashby’s contributions to it, can also be found in the 2016 issue of Treasure State Lifestyles magazine.

Through her efforts, Ashby personally helped the Ad Club Russell Auction raise $5.6 million dollars for the C.M. Russell Museum. The Ad Club no longer operates the auction but that hasn’t stopped Ashby from attending every year since the Russell Museum took over, in support of her favorite cowboy artist.

“I’ve been lucky enough to visit the Cowboy Hall of Fame in Oklahoma, the Rockwell Museum in New York, and The Buffalo Bill Museum in Cody, but I think we have the crown jewel because no one else has C.M. Russell’s studio, house, and grave but us.”

For her many contributions to art, television, and the Western way of life, Ashby has earned numerous awards, including the Ad Club’s Bob Scriver Bronze (for contributions to the C.M. Russell Auction), the Humanities Hero Award, the Most Influential Woman in Great Falls, the University of Montana’s Distinguished Alumni Award, and the Paris Gibson Award (for contributions to Great Falls). She has two essays, “The Montana Woman” and “What is a Montanan”, in the Congressional Record, and in 2010, she became the first living woman and second overall, to be inducted into the Montana Broadcaster's Hall of Fame.

In September 2017, she will receive the Josephine Trigg Award, the highest award given by the C.M. Russell Museum.