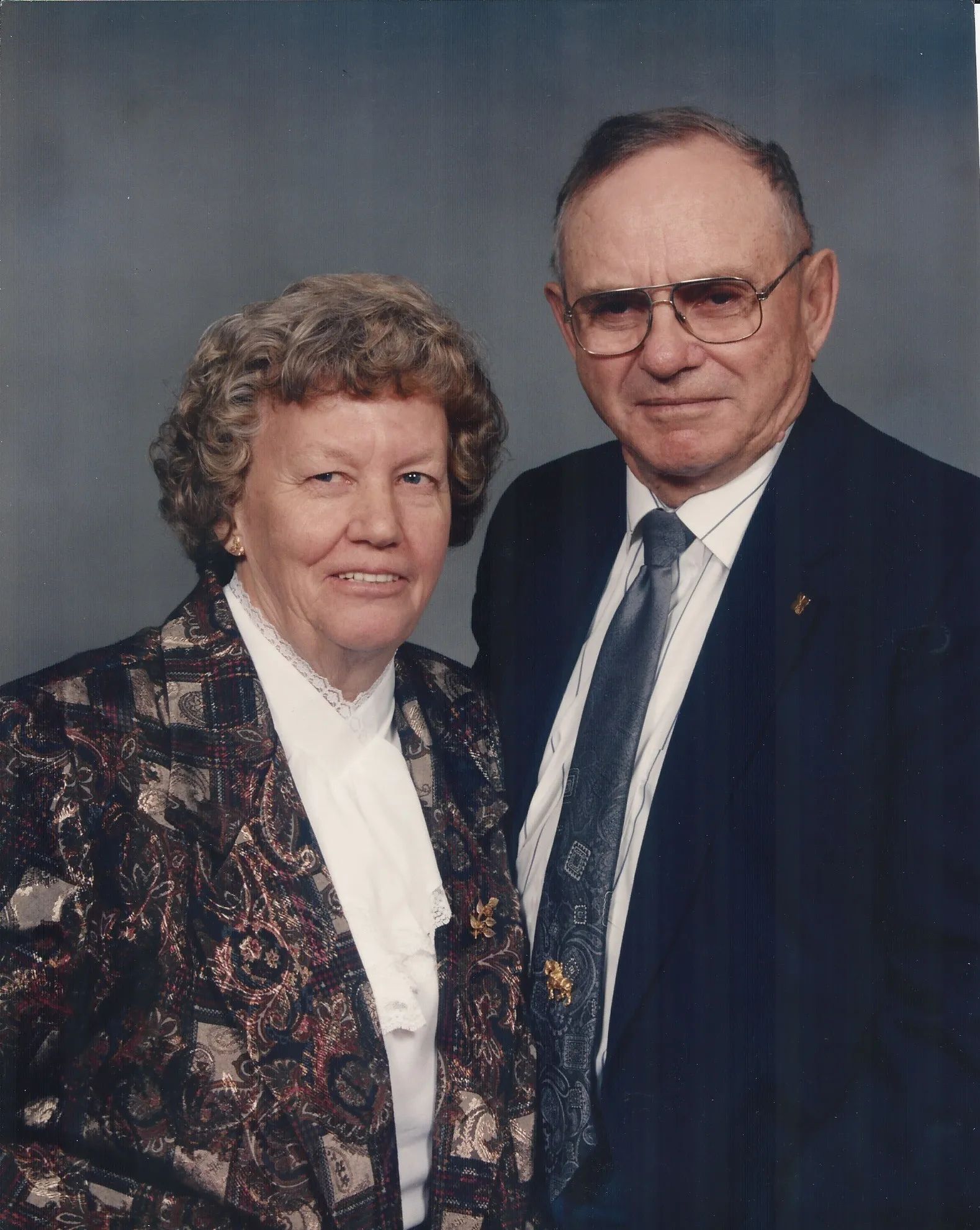 John Will Stuker was born July 17, 1924, at home in Paradise Valley, Blaine County, Montana, to John and Sophie (Rausch) Stuker, the second of five children. He attended Paradise Valley School. At age seven, John sat on a flat board to drive a team of horses in the fields to break up the clumps of dirt. At age 10, his mother died. At 12, John farmed while his father, hauled drinking water from their farm to Harlem, a 25-mile round trip. At 17, John was hired by Gustove Vercruyssen then by Prudencio “Prunes” Agorreta, a neighboring rancher, 18 miles south of Chinook on Clear Creek. Prunes ran large bands of sheep and herds of cattle. John made many 85-mile day rides by horse to and from Prunes’ to north of Lohman to chase wild horses back into Canada. There were no fences and the grass was needed for cattle.

An Agricultural Deferment requested by Prunes, kept John from the service until January of 1946. John served in the United States Army on the Berlin Airlift, Operation Vittles, in the 252nd Combat Engineer Battalion as a staff sergeant and had his paycheck sent home. John was honorably discharged on December 31, 1948. He returned home to work for Prunes until Prunes’ death and his estate was settled in 1950. John remained in the Reserves for four years.

Fay Lois Vercruyssen was born on leap year, February 29, 1932, to Gustove and Marion (Kearful) Vercruyssen, in the Sacred Heart Hospital, Havre, Montana. She was the second of four girls. Fay lived in a homestead log house with a dirt floor, until eight, then her father built a regular wooden house. She had scarlet fever and lost her hair. At nine, during haying season, Fay drove a team of horses on a sulky rake behind the mower and the stacker team while her future husband, John, stacked the hay. The neighbor would hire Fay to drive the stacker team all summer for one dollar. The pony Fay rode three and one-half miles south to Ada School, often ate her lunch from the saddle pack. One summer the family collie rescued her from drowning in an irrigation ditch by pulling her out. Her family raised many sheep and cattle and her job was to take the milk cows out to pasture in the morning and bring them home at night, milk a cow in the morning and night, feed chickens, gather eggs, do dishes and wash clothes on a scrub board with lye soap. When ill, rendered goose and skunk fat were mixed half-and-half and applied to her chest, back and throat. For a cough, kerosene and honey were mixed to swallow. At nine, Fay’s parents separated and Fay lived with her grandparents, Jerome and Flora (Tibbits) Kearful, on the Eden Ranch, three miles down creek. Jerome “squatted" his land before homesteading was available, built a log cabin in 1890 and purchased a Sears & Roebuck prefabricated house in 1916. Fay rode a horse three-and-one-half miles north to Sprague School. Fay always liked bees, because her grandparents, Alphonse and Marie (Anssons) Vercruyssen, who lived up the creek, raised bees that they kept in the root cellar during winter to keep from freezing. Fay graduated from high school in three years at the Ursuline Academy in Great Falls in 1948 and with a two-year teaching degree from the College of Great Falls in 1950.

John and Fay married July 29, 1950, at St. Gabriel’s Catholic Church, in Chinook, between first and second cuttings of hay. John’s father gave them a bred milk cow. They moved north to farm and ranch, first leasing several places before buying. Their first home was a log house and their next, unoccupied a few years, the front door would not close, windows were broken and the chimney crumbled. They moved in before repairs because John insisted. Three children were born: Jerri, John H. and Kenneth.

In 1953, they moved to a ranch 33 miles north of Chinook that they purchased, by the Canadian border, on the Bagan Road that turned to gumbo with rain. Four more children were born: Richard, Ruth, Marion and Leslie. For eight years, Fay, taught their children and neighbor children, at Hydro School two miles from the ranch. John’s father lived with them before his passing. Their black and white TV ran off a gas engine, their backyard had clotheslines and an outhouse supplied with catalogs from J.C. Penney, Sears & Roebuck, Montgomery Ward and peach wrappers. Their water well was at the bottom of the hill, water had to be pumped and hauled for bathing, cleaning and the wringer wash machine. The root cellar was used for food storage and storm shelter. The basement held coal, potatoes, jars of canned goods and supplies. Baths were taken in the kitchen in a round metal tub, living room linoleum was turned for a better wear pattern, nails were straightened for reuse, and a large garden, chickens, geese, pigs, horses and Hereford cattle were raised. John once accompanied his cattle on the cattle train back east to sell. Bachelors visited often to eat pies Fay baked. The Rural Electric Association brought electricity into their area about 1958.

In 1967, more land was purchased, eight miles north of Chinook on the Elloam Road, for children to attend high school. The bathroom tub warmed many new born calves. Horses were still used for cattle herding and winter feeding. John began raising registered Belgian draft horses in 1979 and he showed two, four and six horse hitches. John could hitch and have his team ready to drive in ten minutes and from atop the haystack or on the ground his team would listen for and follow his commands. John was a director of Milk River Production Credit Association, the local and interstate Federal Land Bank boards, an officer of the Silver Bow and Cherry Ridge Grazing Districts, a member of the Veterans of Foreign War, American Legion and Montana Stockgrowers Association, a school board trustee and a 4-H judge. In 1967, John was the Outstanding Conservation Farmer of Blaine County.

John and Fay celebrated both their 40th and 50th wedding anniversaries at their ranch with family and many friends. A Catholic Mass was celebrated at the ranch on their 50th anniversary. After John’s passing, Fay cared for their daughter, Ruth, who battled cancer. Fay would tell you, “Life is easier than you think; all you have to do is accept the impossible, bear the intolerable and be able to smile at anything.” The ranches John and Fay built up together remain in their family, and they resided there until their passing. John passed October 28, 2001, and Fay passed June 19, 2014, and both were buried at Kuper Memorial Cemetery, Blaine County, Chinook, Montana.