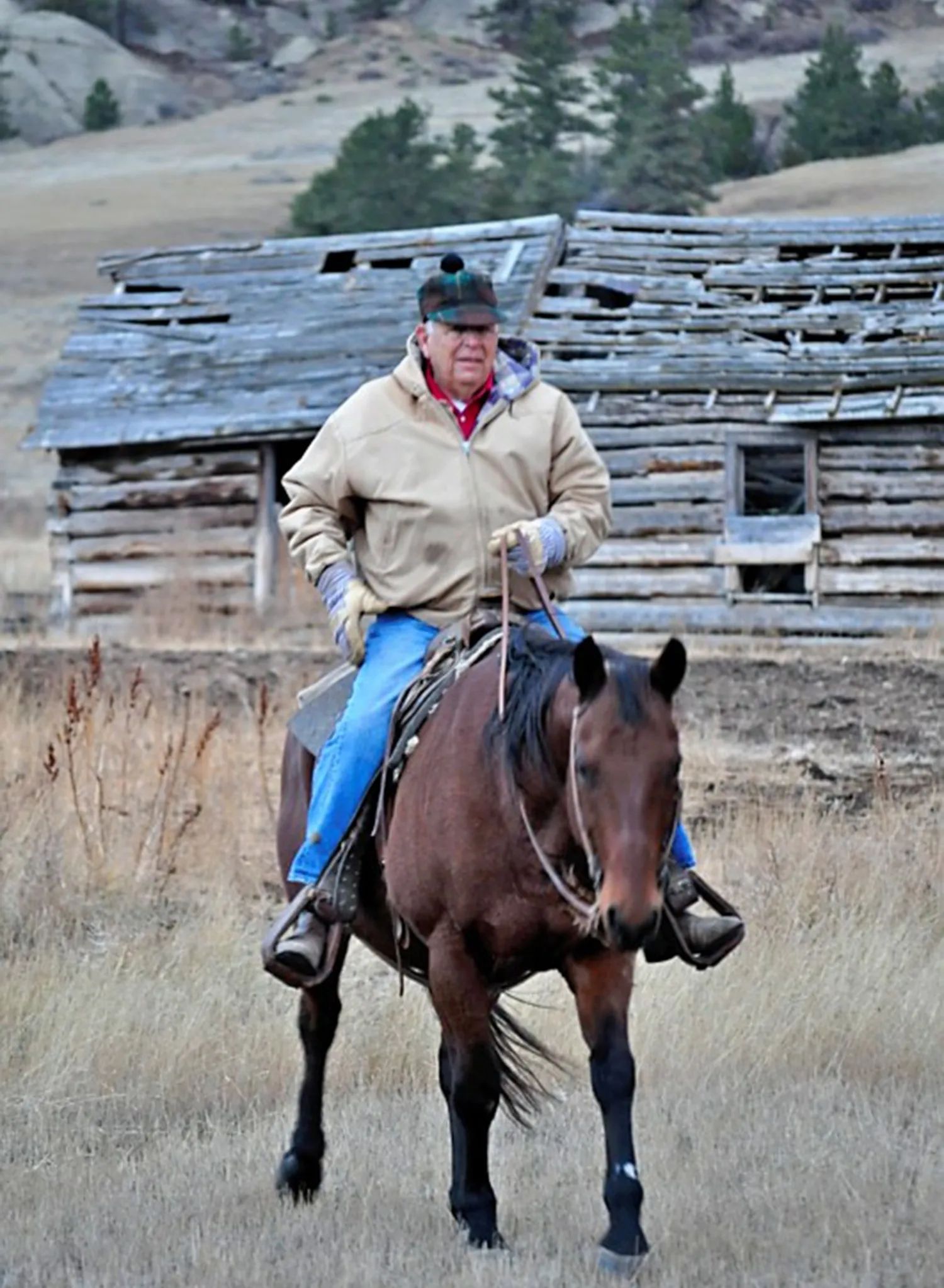 John L. “Jack” Bailey was born to John and Helen Bailey in Miles City, Montana, on December 5, 1930. Tragically, Jack’s father, John, passed away from typhoid fever prior to his birth. Jack was to become a fourth generation rancher in Rosebud County where his family started ranching in 1883.

Jack’s earliest memories include learning to trap and hunt muskrats, skunks and coyotes at the ripe old age of seven. He used the money he earned from muskrat and coyote hides to buy .22 shells to shoot prairie dogs.

His first school was a log cabin that was not in the best of shape as the snow drifted onto the floor of the cabin, and it was badly infested with mice and pack rats. The school age boys had to carry knives to school on certain days to kill the pack rats while the girls and teacher stood on desks and screamed. Jack had to follow where the work was with his grandfather, so he stayed with his grandparents as needed. If they were working too far away, he had to ride horseback to the McKay School to get his education. Jack shared a bus with students from the Northern Cheyenne Reservation in a plank-sided van once he started high school in Colstrip.

Jack started going on roundups with his grandfather at age eight. He stayed in his own teepee tent while moving around with the cowboys. Once work was done on their place, they rode all through the country in southeastern Montana and helped others. During World War II, there was a great shortage of men so he and his grandfather went where needed on the area farms and ranches working cattle and doing custom combining.

The first paying job he landed was working for his Uncle Jim Bailey putting up hay, leading an old stacker horse that pulled the hay up a boom pole. They pitched the hay by hand onto slips, and it was lifted up, then the boon pole swung around and piled up the hay. He worked 13 days and made $1.30.

Drought took over the ranch in 1947, so the Baileys had to move the cattle over 10 miles away to Lyman Brewster’s on Muddy Creek. The cowboys had to trail the cows several times back and forth from there in search of grass.

Jack took over the operation of his granddad’s ranch in 1950 at the age of 19. Along with the big steers, they raised hay and alfalfa seed and thrashed it with a thrashing machine so they had straw for feeding cows and used a lot of Northern Cheyenne day labor for help. The ranch shipped their steers when they weighed 1,000 pounds. Shipping occurred at Benteen, Montana, near Custer Battlefield or at Colstrip, and from there they went to Saint Paul, Minnesota, three days on the train. The cattle needed to be watered regularly on a train, so a crew had to go with them. Jack was able to take that trip one time so he could see what the crew’s job would be.

In 1956, he met his wife and lifelong partner, Carol Palmer, at a dance. They were married in 1957 and raised five children together, Jean, John, Diana, Bart and Molly. He had been trying to expand his cowherd and ran cows with Jack Moreland on the Cheyenne reservation for several years. In 1963, they lost that lease when the Steer Enterprise was formed by the Northern Cheyenne. Jack bought his own ranch in 1963 and moved his growing family there to expand the ranching operation.

The biggest change in the ranching operation was when they went from the big steer operation to a cow/ calf operation. The transition happened very fast because their cattle buyer didn’t want to buy calves at the same time as the big steers. The buyer’s reason was, “I’d rather buy bananas so I can keep them in a bunch.”

Outside of the ranch work and raising a family, Jack was as a special deputy for Rosebud County, serving as backup during the time they didn’t have many deputies. He helped train and rode around with new deputies for many years. The county supplied the ranch house with a radio because it was too far from the Sheriff’s office for deputies to get to the far end of the county in emergencies. He also served as a fire marshal for the local area when the State first turned the fires over to the county until today. He spent many years helping neighbors protect their grazing land from many lightening caused fires.

In 1996, Jack’s eldest son, John, along with his wife, Dianna, and family, came back to the family ranch to help with management of the operation.

Last but not least, Jack recognized the necessity of protecting a site sacred to the Native Americans located on the ranch, the Deer Medicine Rocks. He continues to keep the history of the Medicine Rocks alive as a sacred trust through all his years on the ranch. He and his family welcome visitors to the site. There have been many come from the U.S. and foreign countries, thousands of people taking tours, as well as countless school children. Groups of college students, teachers and movie crews come to their door. Jack cheerfully takes the groups over, telling the history of the rocks and never charging a fee for a tour. He points out the carvings and tells the story of Chief Sitting Bull who had a dream that he needed to find the rock where the lightning struck, leading him and his people to the site. He then held a sun dance and had a vision that gave the warriors the confidence they would be successful in the Battle of the Little Big Horn. The story of Crazy Horse’s death is inscribed on the Owl Rock next to the Medicine Rocks.

Jack did a lot of work for the Park Service for years entertaining their employees with the Deer Medicine Rocks where they had their new employee orientation.

Jack began work protecting the Medicine Rocks along with tribal leaders in 2006 by working toward having it designated as a National Historic Landmark. The efforts were successful with full approval in 2012. Northern Cheyenne and Sioux officials publicly thanked the Bailey’s for preserving the rocks and allowing tribal members to fast, smoke and pray at one of their most sacred sites. Jack is a generous man who respects and loves the land and is willing to take his time and that of his family to share this treasure and memories with the rest of the world.

At the age of 86, Jack is still living and working on the ranch his family has owned for over 130 years.