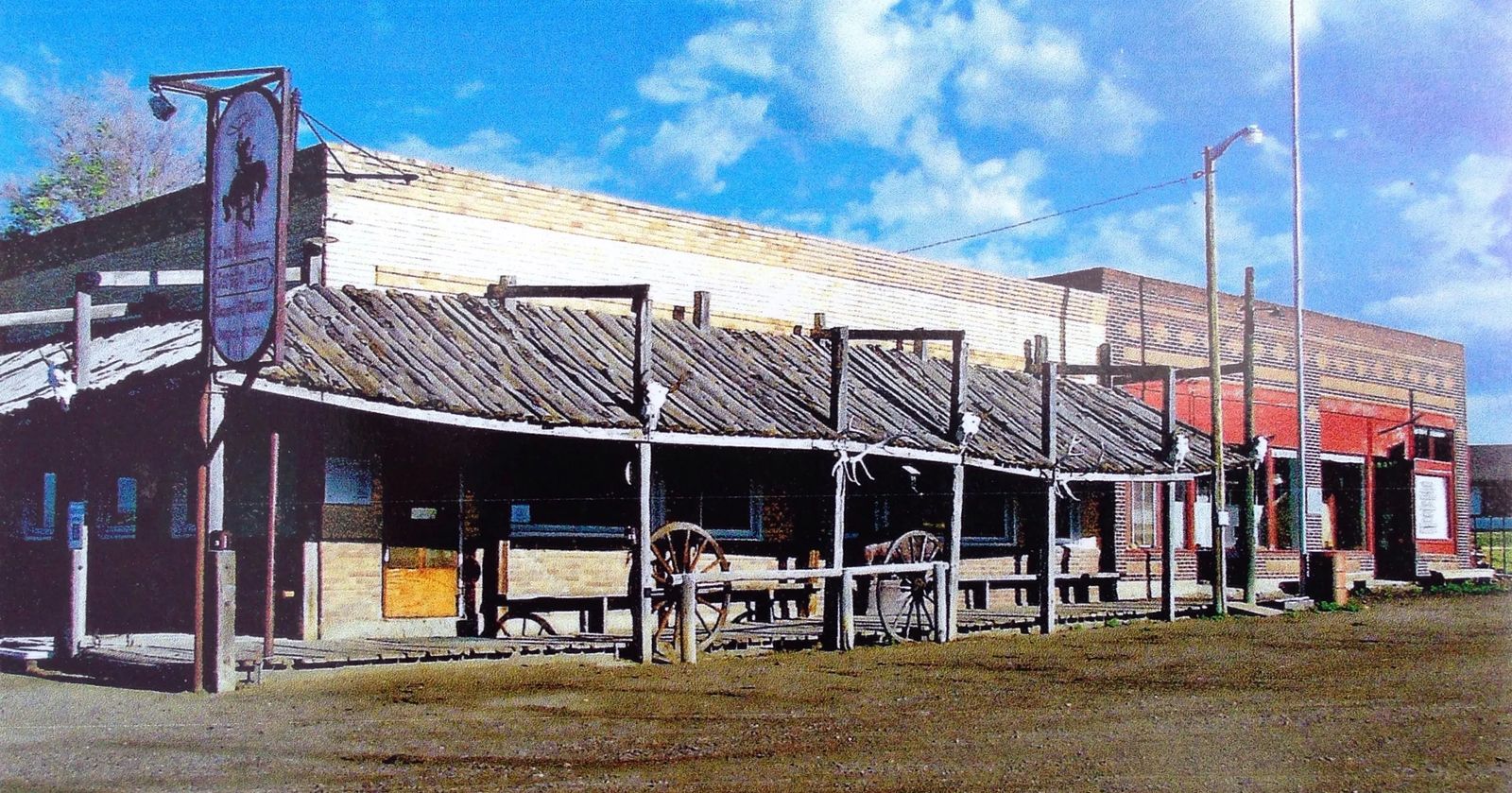 The Jersey Lilly building was completed as the Wiley, Clark, and Greening Bank in October 1914, in the small town of lngomar, Montana — established in 1910 by the Milwaukee Railroad — and was lngomar's first brick building. Later it became the lngomar State Bank. The bank had a total of three walk-in safes when it went into receivership in 1921. The town had 46 businesses at the height of its existence and was known as the sheep shearing capital of the world.

In 1933, Clyde Easterday established the Oasis Bar in the bank building. The cherry wood back bar that is currently in the Jersey Lilly was one of two transported from St. Louis up the Missouri and Yellowstone rivers to Forsyth, Montana in the early 1900s. It remained in “quarantine” in Forsyth until prohibition was over in 1933, then installed in the Oasis. Les Seward says the back bar was transported to Ingomar in the back of a Model T pickup causing the “scratches” that you can see in the mirror.

In 1948, Bob Seward came to own the Oasis Bar. At the time he was a Range Rider for the Grazing District by Ingomar and some say he won the bar in a poker game. The Seward Family, originally from Texas, didn't want their bar to have a common name so they named it the Jersey Lilly. This name was taken from the story of Judge Roy Bean of Langtry, Texas, an eccentric saloon keeper and Justice of the Peace — who called himself “The Law West of the Pecos.” He was smitten with the British actress Lilly Langtry, who was nicknamed The Jersey Lilly. Bean built a wooden saloon/courthouse and named it after her in hope she’d come to see him. Lilly did visit nearly a year after he passed away.

In 1958, Bob sold the Jersey Lilly to his son Bill who gave the place new character and life. Bill was known for his sailor hat and the string he tied around his head to hold his glasses up. Bill had been a boxer. From 1939 through 1941 he won 45 fights, 38 by knockouts. His nose had been broken numerous times and was no longer able to support his glasses. His solution was the string around his head. For years Bill slept on a simple bed in the basement, which was unfortunate for a man who broke into the establishment through the coal chute going into the basement and was met in the hallway, by Bill, the boxer. The story has been told how Bill drank his coffee cold and his buttermilk straight off the dashboard of his 110-degree vehicle. It was nothing to see him outside in the middle of the winter chopping wood with only a tee-shirt on, steam rolling off him; or sponge bathing himself in the sink behind the front door of the Jersey in the early morning. For Bill, the Jersey Lilly was the hub of the universe. He and his wife Martha came up with the famous Sheepherder Hors d'oeuvres, Jersey Lilly Bean Soup, and homemade salsa. Bill wanted the Jersey Lilly to make people feel like they were at home. That was one of the reasons he started his special Thanksgiving and Christmas day feeds for folks who couldn't or didn't have a place to go for the holidays. Those gatherings ended in 1995 due to the sale of the Jersey Lilly, but in 2012, the Bill Seward Thanksgiving Day celebration was re-born. The reason for the celebration is still the same and the Jersey Lilly is open to anyone who chooses to participate.

After 37 years, Bill decided it was time to pass the Jersey Lilly on to someone else and sold it to Jerry Brown. Jerry had been coming to Ingomar on various hunting trips since 1970. He became friends with Bill and told him many times he was interested in buying it. In 1995, Bill took him up on his offer. Jerry was originally from Colorado Springs, Colorado but was living in Minnesota and had been in the burial vault business. Jerry breathed fresh life into the Jersey by bringing many guests from the Midwest to experience the forever frontier of Ingomar and the Jersey Lilly. In the 15 years that Jerry owned it, he made several improvements, the biggest being the upgrade in the building connected to this historic treasure, making it a functional addition to the main building. This building had its start as the JA Bookman General Store, which is now used for parties, meetings and overflow to the main dining area. The walls are filled with history of the Jersey Lilly and Ingomar, along with an array of photos from throughout time.

In 2010, Brown retired and sold to Boots Kope, originally from Miles City, and June Nygren, originally from Wisconsin. June began working at the Jersey in 2005 when she moved to lngomar along with her children and Grandma.

Customers to the Jersey Lilly range from cowhands to world travelers. The Jersey Lilly is known around the world and has been featured in many different media outlets including Backroads of Montana, The Food Network, several Montana newspapers and magazines, along with numerous Pub Books. It was added to the National Register of Historic Places in 1994. When visiting the Jersey Lilly visitors often describe it as a step back in time. While the Jersey Lilly has running water inside, visitors have to venture outside to find the restrooms. Follow the wooden boardwalk around back and you will find the “Heifer Pen” and “Bull Pen,” complete with the “Cowboy Rain Gutter Urinal.” The three bank vaults are a must-see as well. A visit to the Jersey Lilly wouldn't be complete without the story of the old moose head on the wall with a cigarette hanging from its mouth. Bill told folks he shot that moose when it stopped to have a cigarette. Bill did indeed shoot that moose, but as Bud Seward (Bill’s brother) told the story, “There was an Indian in here. He was about 9 feet tall and he put the cigarette there.” Why it was never taken out no one really knows for sure. Bill made the Jersey what it is. His image and character are still very much alive here in this quaint, unique and historic business.