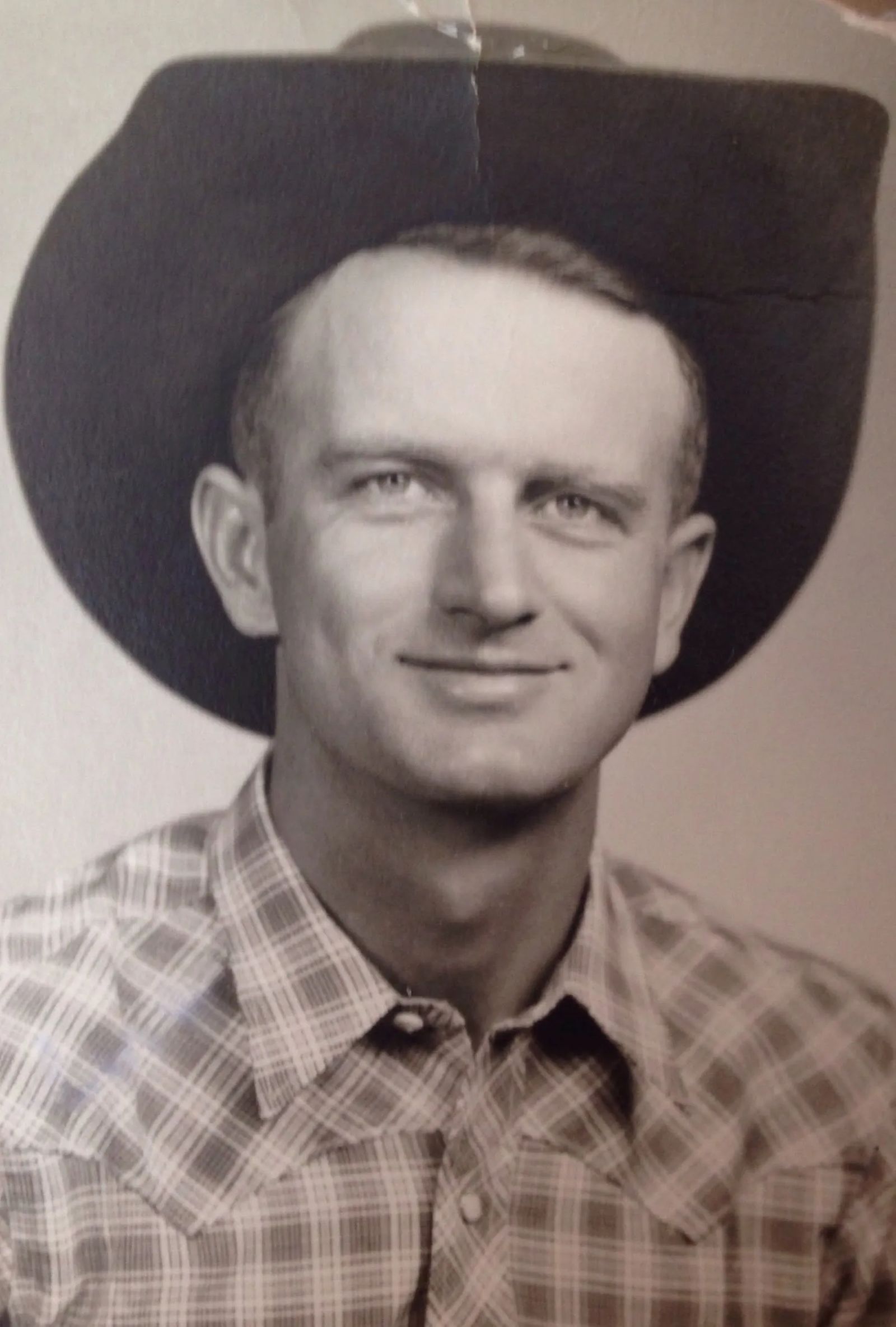 Lorin Abarr, Sr. was born to Carl and Lillian (Jones) Abarr on December 10, 1930, in Billings, Montana. His parents moved from Parshall, North Dakota, to homestead 160 acres in Carbon County, Montana at Dryhead, where they lived in a one-room cabin for the first eleven years of Lorin’s life. Lorin and his siblings, Don, Harley, Robert, Anna May, and Edith received their education in a log school house.

Lorin’s father, Carl, worked for various ranches, including Teddy Roosevelt's outfit at Medora, North Dakota, and taught his boys to ride horses and drive teams. Like many boys of the Great Depression era, Lorin and his brothers worked to contribute food and resources to their family. Lorin, at 11 years old, drove a stacker team on a haying job, at 75 cents a day. Help was scarce during World War II, and so were dollars for young men. Lorin received a check for $17.00 when all the hay was put up for the season.

In 1945 at the age of 14, Lorin hired out to R.B. Fraser’s Winnett outfit where two top-notch bronc riders, Harold Shelhammer and John Hagen, taught Lorin to ride bucking horses. “As the rule went,” Lorin would chuckle, “it was either ride or walk and it was too far to walk.”

Lorin enlisted in the United States Navy in 1951, shortly after the Korean War began. He served in an active war zone in the South China Sea on the aircraft carrier, USS Point Cruz. Lorin earned four medals for his service, and was a part of a unit receiving six battle stars. He was honorably discharged in 1955 and returned to Montana to live the life of a cowboy. With saddle and bedroll in tow, Lorin broke and trained countless horses on outfits in Montana, Wyoming, Oregon, and Nevada. He could front foot a horse, was a skilled header and heeler in team roping competitions and became a widely known cowboy amongst his peers.

Lorin’s cowboy grit and determination left impressions. Western photographer John Langmore, who met Lorin while he was working on the Benny Binion Ranch, years earlier, outside of Jordan, Montana, says, “He was the consummate soft-spoken, tough-as-nails, hard-working cowboy. I will never forget trying to keep up with him as he headed out at a long trot on his big Appaloosa horse, Thunderfoot. For forty years I have held Lorin up as the personification of everything people admire about cowboys." Lorin was truly in his element when on the land and working stock with fellow cowboys. Author and fellow cowboy, John L. Moore, writes, “Like many working cowboys, Lorin never had much money but his soft-spoken, hard-working ways left an impression. He was barbed wire wrapped in velvet.”

A 1975 Western Horseman article featuring the Binion Ranch, which Lorin managed for a time, and its cowboys, said, “Ol’ Lorin has spent his whole life fighting them broncs in harness and under saddle and don’t excite worth a darn. He’s as good a hand as can be found on any man’s wagon.”

Lorin was a true hand in the hills on many ranches. He recounted a story about a wide-open outfit in the Missouri Breaks where he and his brother, Harley, dressed in several layers and angora chaps, rode their horses through belly deep snow to gather cattle weakened by temperatures dropping to nearly sixty below zero. While the cattle slowly moved and rested, Lorin and Harley lit small sagebrush fires as needed along the way to keep warm.

​Lorin met his future wife, Pauline Ritter in Jordan at a Saint Patrick’s Day Dance and they married on May 31, 1969. Two children, Lorin, Jr. and Lorena, joined Pauline’s two children, Echo (Riley) Kampf and Craig Riley, from a previous marriage.

In 1977 Lorin and Pauline bought a six-section ranch near Circle, Montana, where Lorin enjoyed teaching his children to ride and work with horses. He treasured cooking giant breakfasts and dinners, and would whip up homemade bread, biscuits and gravy, sourdough pancakes and his favorite, ribeye steak. Cooking skills were picked up from his father, Carl, working ranches with chuck wagons and a stint, as Lorin would say, “wranglin’ dudes” on an Arizona dude ranch.  The sometimes-tough nature of making a living on a small ranch led Lorin to hobble together different forms of income to keep the outfit going. At the times he worked on other ranches, Lorin Jr. and the rest of the family looked after the Circle ranch. Other times he ran cattle for shares on their place for other ranchers, delivered hay, as well as continued to use his early life experiences of breaking and training horses.

In 2001, when Lorin was 71 years old, he and Pauline sold their Circle ranch and moved to Fallon, Montana, where they resided on a small place until December of 2014. The last chapter of Lorin’s life spent in Prairie County moved at a much-deserved slower pace. However, injuries sustained while riding broncs in his younger days, including a particular horse accident that left him in a coma for nearly a month led to progressively difficult health challenges in his final years. Even with these personal trials and the manner in which it impacted his ability to do the things that he loved and cared about, Lorin maintained a tenacious spirit of not ever giving up. This proved to be a hallmark cowboy characteristic that sustained him throughout his lifetime. Flanked by his family, Lorin passed peacefully on January 20, 2015, taking his last ride by horse-drawn hearse to his burial site at the Eastern Montana State Veteran’s Cemetery in Miles City, Montana, with full military honors.