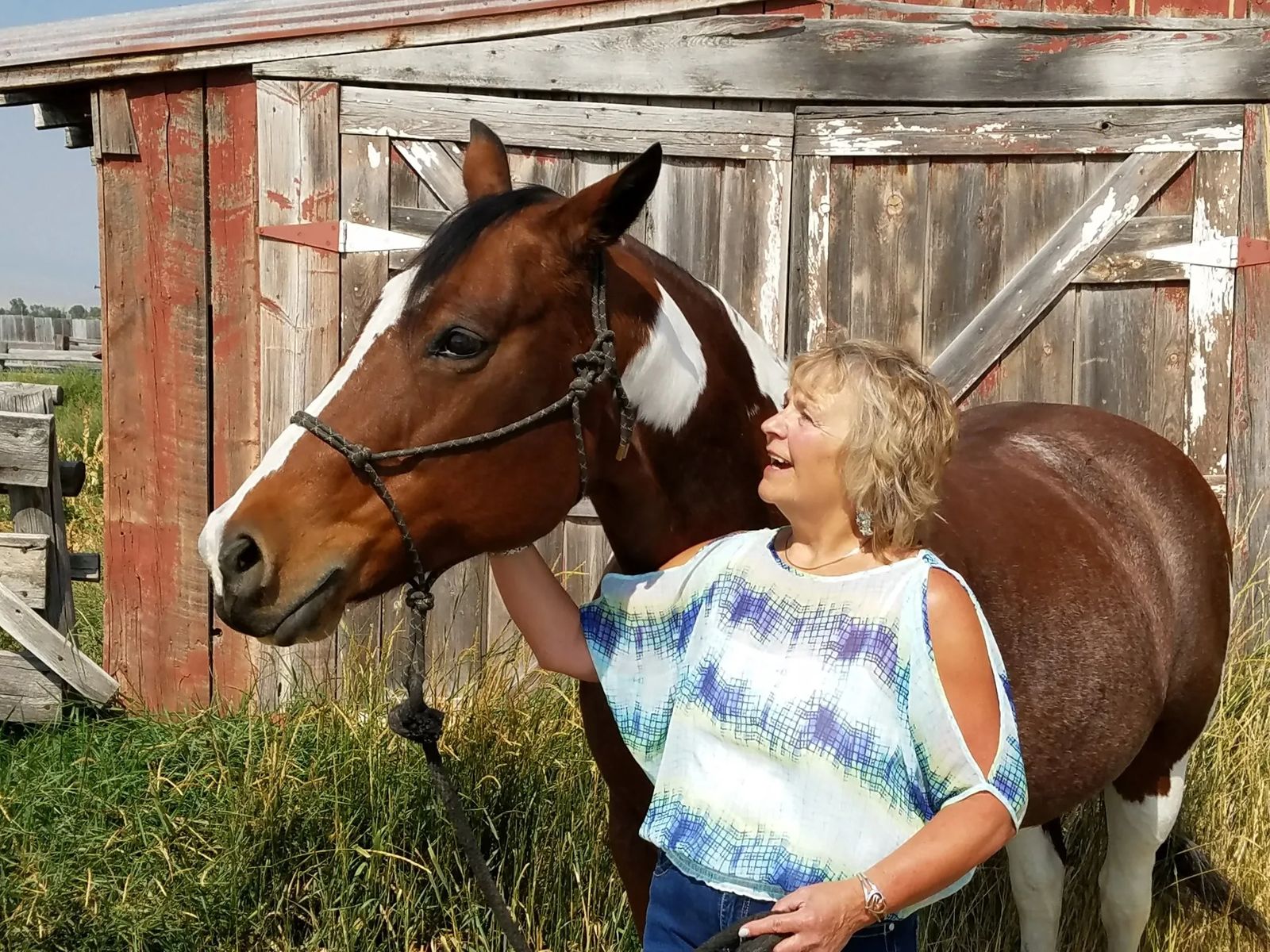 Bobbie Jean Meine was born September 17, 1948 the oldest of five children born to Robert E. Meine and Dorothy Ann Rebich Meine. She is part of the fifth generation to live on the Meine ranch north of Dillon, Beaverhead County, Montana.

Bobbie has loved horses and all things to do with horses all her life. She started riding when very young, helped at the ranch with the cattle running haying equipment.

Because Bobbie had chosen a secretarial career she took all the business classes offered at Beaverhead County High School in Dillon and received several typing and shorthand transcription awards. Upon graduation from high school in 1966, Bobbie accepted a job with attorney Frank Davis. Frank said Bobbie did not need to go to college, as he could teach her more with on the job training. While working full time as a legal secretary, Bobbie still worked at the ranch.

On August 26, 1967 Bobbie married Jim Blake and for a year and a half. They lived at a purebred Charolais cattle ranch where Bobbie helped with the ranch work in the evenings and on weekends.

She was active in the Dillon Jayceens for many years, holding every office and receiving the “Outstanding Jayceen” award in 1972. Bobbie chaired the local and state rodeo queen contests and later judged for both.

In 1974, Bobbie left her job as a legal secretary and Jim went to work for a local rancher. In 1975 Jim bought his own truck and went into the business of hauling hay so naturally Bobbie learned to drive an 18-wheeler and a handle a loader tractor.

On May 20, 1977, Bobbie and Jim’s first son Robert Lewis was born. Bobbie returned to work for Frank Davis and Jim bought equipment and went into the custom haying business. Bobbie started taking summers off from her secretarial job to run the swather, a job she would hold for years to come. They went into farming with the purchase of property in 1980. Bobbie helped when she could, often with son Robert riding in a tractor or truck with her.

Daughter Brandi Jean was born October 6, 1980. She had a rare chromosome defect called Trisomy 13 and lived a heartbreaking 22 days. Their third child Richard James was born January 19, 1982. Bobbie returned to work, after hiatus, for Frank Davis, then the District Judge, in January 1983.

Over the years, several ranchers in the Dillon area, including Bill Jones, Dave Ferris, Tom Larson and Don Shaffner had Bobbie come and help them with what she refers to as “day work” whenever they needed help with a cattle drive, branding, or help with their cattle that involved a willing hand with a horse.

In the next several years, Robert grew old enough to help with baling hay in the summer so Bobbie tried her hand at several part-time jobs. She did typing for court reporters and began to learn “scoping” which is proof reading. For five winters Bobbie rode livestock pens and kept books for Mussard’s Feedlot. Robert took over moving the wheel lines at the farm and Richard began to help with haying and farming. In September 1993, Bobbie went to work as Deputy Clerk of the District Court.

On November 4, 1995, while Bobbie and son Richard were helping work cattle at the Meine Ranch, Jim was struck with a fatal heart attack while loading hay. He was only 51 years old. Bobbie sold the truck, haying equipment and later the farm.

Bobbie left her job at the Clerk of Court’s office at the end of 1996 and went to work full time scoping plus attending to her livestock. She also spent three years working in medical transcription at the local hospital.

When family histories were being compiled for the Beaverhead County history books, Bobbie researched and wrote histories of the Meine family and ranch north of Dillon and the homestead with its additional summer range property, located up Small Horn Canyon.

With one bum lamb, Bobbie started building a small flock of sheep that she ran with her parents’ band. In 2002, Bobbie bought her parents’ sheep.

December 14, 2002 Bobbie married Warren Mussard. They have a ranch north of Dillon where they raise cattle and sheep. Cattle are summered in the Big Hole. Bobbie does most of the cattle work by horseback.

In the early 2000’s, Warren needed Bobbie’s dexterity to artificially inseminate cattle (A.I.). Bobbie attended an A.I. school, and although it took her a while to get the hang of it, she took care of this technique for nearly twelve years. When the time came to pass the torch Bobbie showed Warren the basics and he took over the process. Bobbie continues to help by loading pipettes, handling the cattle and heat detecting.

In 1998, Bobbie started working at Beaverhead Livestock Auction, where she continues to work sale day’s horseback, moving cattle from their holding pens to the sale ring. At age 67 she still enjoys the work.

During 2014, stories were being collected for a history book of the Centennial Valley, in Beaverhead County. Bobbie, along with her family compiled the family history and she wrote four stories for the book about the Meine and Rebich families and the earthquake of 1959.

In 2014 Bobbie sold her sheep to her son Richard Blake. He continues to use the lambing facilities at Bobbie and Warrens ranch. Bobbie helps out with the sheep, or care of her grandchildren and enjoys her horses, some that she raised from colts.

Bobbie has made a difference in the lives of her family, her community and the great state of Montana.