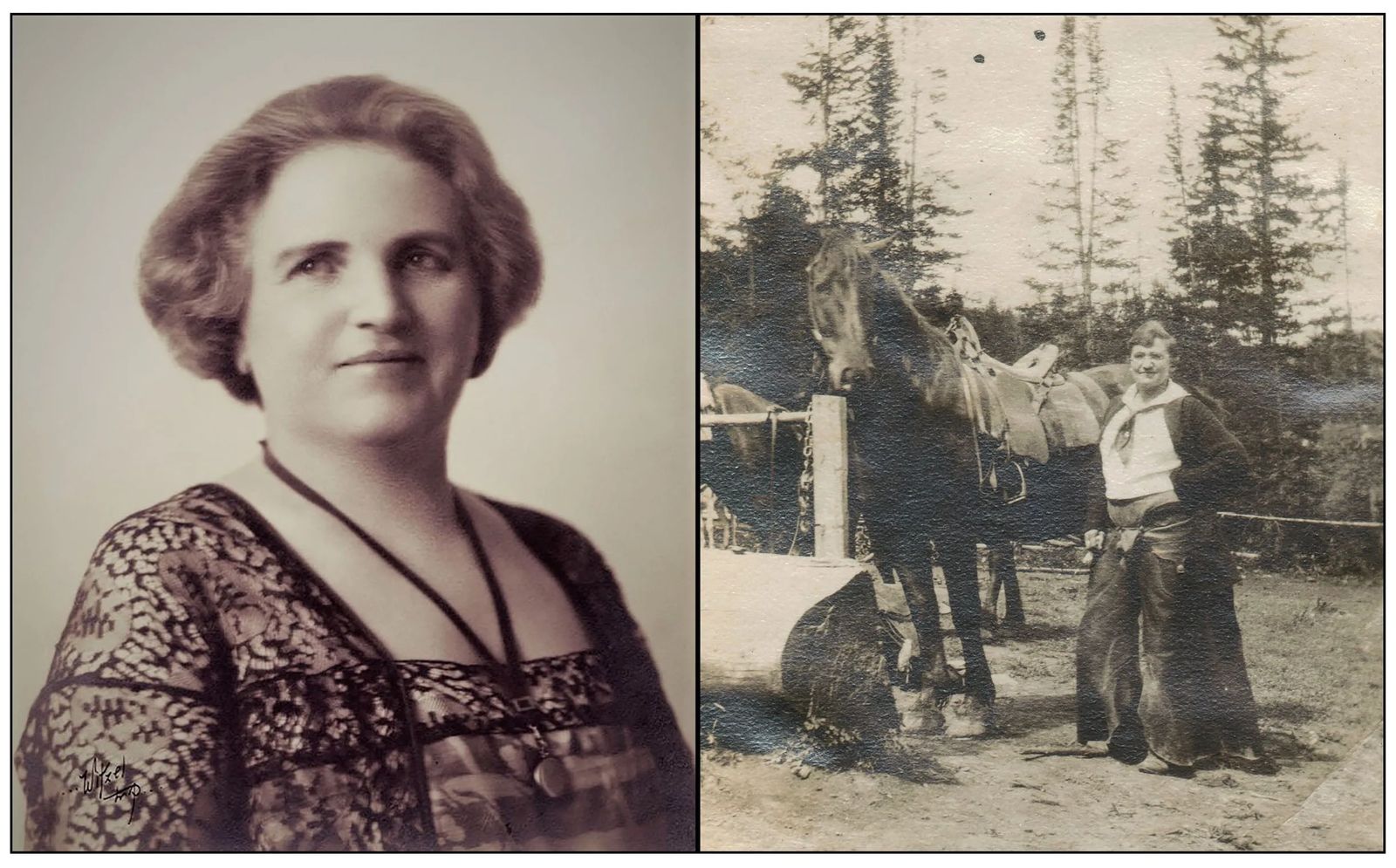 Bertha Muzzy was the youngest daughter of nine children born to Washington and Eunice (Miner) Muzzy on November 15, 1871, Le Sueur County, near Cleveland, Minnesota. The family headed west in 1889 to Great Falls, Montana, preceding the homestead booms. This afforded 18-year-old Bertha the opportunity to witness the last years of free-ranging cowboys grazing cattle on the fenceless prairie before settlers poured into Montana by the thousands.

For $75 Bertha took a teaching job that fall, 50 miles south of her family’s homestead, for 12 students of all grades. She taught through March and never returned. After a quarrel with her sister in their overpopulated small cabin the following December, she eloped with their neighbor, Clayton Bower. Bower was three years older and quite handsome. They rented a house in Great Falls and Clayton worked delivering groceries. Their daughter Bertha Grace was born the next year and son, Harold Clayton a year and half later. The next year Clayton lost his job and they had to move back to the homestead for a few years. He managed to get another delivery job facilitating another move to Great Falls. But two years later he had lost that job too and moved his family to Big Sandy to take a job on the Great Northern section crew.

Big Sandy was a classic old west cowtown in 1899 serving mainly cowboys. Cattlemen Marlow & MacNamara owned the large general store. About all there was to Big Sandy at the time were saloons, a couple hotels, barbershops, livery barns and a few houses of ill-repute. But it was rip-roaring place when the cowboys from many outfits came off the lonely prairie to collect their wages, clean up and blow some steam off at the watering holes.

Bertha was captivated by the mosaic of colorful characters that surrounded her in Big Sandy. Many can be found in her “Happy Family” cast that grew into 68 forthcoming novels. Like her future friend, Charlie Russell, Bower was aware the opportunity to capture this vanishing frontier must be taken. The cowboys were a breed like nothing she’d ever seen. The isolation of this last bastion of open range cattle companies far from the law attracted men running from their past.

Bertha was fascinated by the unusual way the cowboys kept to themselves and used only nicknames, the way they talked, and the way they walked. Outlaws Butch Cassidy, the Sundance Kid and the Curry Brothers all made appearances in Big Sandy. Who were these others hiding under the shade of their hats? What had they done to arrive at this place? Her imagination ran wild. Others were just lovable farm boys that wanted to be cowboys who came up from Texas with cattle for the adventure. Bertha was the belle of the ball at the dances as she was attractive, funny and loved to dance. She lent an ear for lonely young cowboys so far from home. They in turn loved their “Bert.” When their third child, Roy was born socializing with cowboys became a welcome diversion. The male to female ratio in Big Sandy afforded her lots of attention her husband, Clayton did not appreciate. He moved Bertha and the children a mile outside of town to what she called the “Bleak Cabin” to escape the ruckus of the saloons. They were so poor they eventually took on a boarder to help with rent. Bill Sinclair was a 22-year-old top hand for MacNamara tasked with tending new calves that winter. He loved to share campfire stories he’d heard with Bertha, fodder for her stories she constantly tapped out on her typewriter. She was nine years older and helped him write his own while they critiqued each other’s work. He was the first one to read “Chip of the Flying U,” as it developed. It would become the most successful of her 68 books and made into a movie four times.

When Bertha earned her first paycheck from Popular Magazine for a serial version of Chip of the Flying U, Clayton began referring to her as “my little red-headed gold mine.” His inability to support his family sufficiently was always a source of contention. She left him in 1904. But just four months after their divorce was final, Clayton married again and moved to Washington with Grace and Harold.

A month later Bertha married Bill Sinclair in Great Falls. They moved into a home just a few blocks away from Charlie Russell and became good friends with the artist. Bertha was commissioned to expand her Chip stories into a full-length novel with Russell doing the illustrations. It was a smashing success rivaling The Virginian. All of Bower’s books would be published under the name B.M. Bower. It was surmised that book buyers would not believe that a woman could possibly be privy to this man’s world and therefore no credibility. Book reviewers referred to B.M. as male and so did her legions of fans.

Bill and Bertha wanted to capture more experiences of the open range. In 1906 Valley County still had many cow outfits meandering the prairies and moving their herds. The county at the time encompassed all the land from the North Dakota border to west of Malta and from Canada to the Missouri River. Bill and Bert knew all the brands and were welcomed at any chuck wagon and campfire. They started a horse herd in Valley County and would move there the next spring.

With one storm after another, the winter of 1906-07 buried the prairie with deep snow. Starving cattle drifted into Glasgow and ate the siding off the houses. It was reminiscent of the Big Die-Up of 1886-87. Their entire horse herd perished. It was no place to take their new baby, Della Frances born in January. Bert and Bill later moved to California where Roy and Della were raised.

1908 found the Sinclair’s successful writers of western fiction living in Santa Cruz. Bill’s first book, Raw Gold was published that year by Geo. Dillingham who had published Bower’s books. According to Della’s daughter, Kate (Baird) Anderson, who lived with her grandmother for several years and wrote a biography of her for the University of Oklahoma Libraries in 1997, “factors beyond their control broke up the rare partnership” and they divorced in 1912. in 1920 Bertha lived in Hollywood and married Bud Cowan, a cowboy from her Montana days. He was a good singer, piano and guitar player and a friend from their earlier years at Big Sandy. He died in 1939.

Bertha Muzzy Bower died on July 23, 1940 in Los Angles at age 68. According to her niece, Susan Bower-Litzenberger, her ashes were scattered at sea off the California coast where Bert’s adventurous years spent in Montana disappeared into the Pacific Ocean.

Official Paper of Valley County and Town of Glasgow (for information on the winter of 1906-07).

B.M. Bower This source lists all 68 of her books