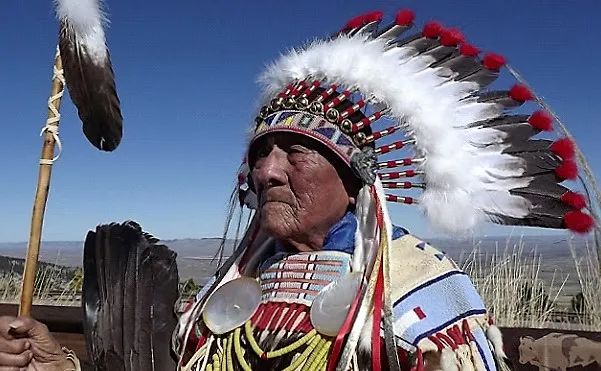 High Bird - Dr. Joseph “Joe” Medicine Crow was born near Lodge Grass, Montana on October 27, 1913 to Leo Medicine Crow and Amy Yellowtail. At age eleven he was present for and heard interviews conducted with his step-grandfather, who was an eye witness at the Battle of the Little Big Horn. White Man Runs Him, his step-grandfather was a scout for General George Armstrong Custer. Medicine Crow personally knew four of the scouts that had been with Custer near the Little Big Horn River that day in 1876.

Medicine Crow attended Bacone College in Muskogee, Oklahoma, and earned an Associate of Arts degree in 1936. He studied sociology and psychology for his Bachelor’s degree from Linfield College, McMinnville, Oregon in 1938. In 1939, he earned a Master’s in Anthropology specializing in the effect of European culture on Native Americans from the University of Southern California and was the first member of the Crow tribe to earn a Master’s Degree. He began his doctorate studies and by 1941 had completed the coursework. He began writing his dissertation but did not complete his doctorate because as he explained his uncle, named “Uncle Sam” had other plans for him. He taught at Chemawa Indian School in 1941. He received an honorary doctorate from Rocky Mountain College in 1999, an honorary doctorate at the University of Southern California in 2003, and an honorary doctorate at Bacone College in 2010 where he was an ambassador and commencement speaker for more than 50 years. He was a founding member of the Little Big Horn College and of, the Buffalo Bill Historical Center in Cody, Wyoming. In 2015 Medicine Crow attended groundbreaking for the new Medicine Crow Middle School located in Billings, Montana and named in his honor.

In 1942, he joined the army and became a scout in the 103 Infantry and fought in World War II. When he went into battle he wore his war paint beneath his uniform and a sacred eagle feather beneath his helmet. Medicine Crow completed the four tasks to become a war chief: 1 He touched an enemy without killing him, 2 He took an enemy’s weapon, 3 He led a successful war party, 4 He stole an enemy’s horse. He touched a living enemy soldier and disarmed him when he turned a corner and found himself face to face with a young German Soldier: The collision knocked the German’s weapon to the ground. Medicine Crow lowered his own weapon and the two fought hard hand- to-hand. Medicine Crow was choking him when the man screamed out ‘momma’ thus he let him go. He also led a successful war party and stole fifty horses from a battalion of German SS Officers, singing a traditional Crow honor song as he rode off. He is the last member of the Crow Tribe to become a war chief. Medicine Crow’s interview describing how and why he became a war chief appears in the 2007 PBS Ken Burns series “The War” describing his World War II Service.

Medicine Crow married Gloria Morrison in 1947. She passed away in 2007. His children include Ron Medicine Crow, Vernelle Medicine Crow, Diane Reynolds and Garnet Waten. In 1948 Joe was appointed the Crow Tribal Historian and anthropologist. He began work with the Bureau of Indian Affairs (BIA) in 1951 and retired in 1981. He served as a board member or officer on the Crow Education Commission almost continuously since 1972 and addressed the United Nations in 1999.

As the tribal historian, he was honored as the 2005 ‘Montana Tourism Person of the Year’. Medicine Crow was a cast member in the documentary about the Crow and Shoshone Sun Dance and Tribal Culture. He was a frequent guest speaker at Little Big Horn College and the Battlefield Museum. He wrote the script that has been used in the Battle of the Little Big Horn reenactment held every summer in Hardin since 1965. He preserved the stories and photographs of his people in an archive he kept in his home. His books include Crow Migration Story, Medicine Crow, Handbook of the Crow Indian Law and Treaties, Crow Indian Buffalo Jump Techniques, From the Heart of Crow Country, Counting Coup: Becoming a Crow Chief on the Reservation and Beyond, and Brave Wolf and Thunderbird.

On June 25, 2008, Medicine Crow received two military decorations: The Bronze Star for his service in the United States Army and the French Legion of Honor Chevalier medal. On August 12, 2009, he was awarded the Presidential Medal of Freedom by President Barack Obama. During the White House ceremony, Obama referred to Medicine Crow as a bacheitche, a “good man” in Crow.

Joseph Medicine Crow continued to write and lecture at universities and public institutions until his death at the age of 102 on April 3, 2016 in Billings, Montana. During his remarkable life, Medicine Crow was a respected and accomplished writer, author, historian, anthropologist, warrior, educator, and sought-after speaker. He appears in the books and scripts of documentaries about the Little Big Horn and his service in World War II. On the day of Medicine Crow’s death Senator Jon Tester said “Today Montana lost a treasure. Joe Medicine Crow was a soldier and a scholar, but above all he was a fierce advocate for Native American Families.”