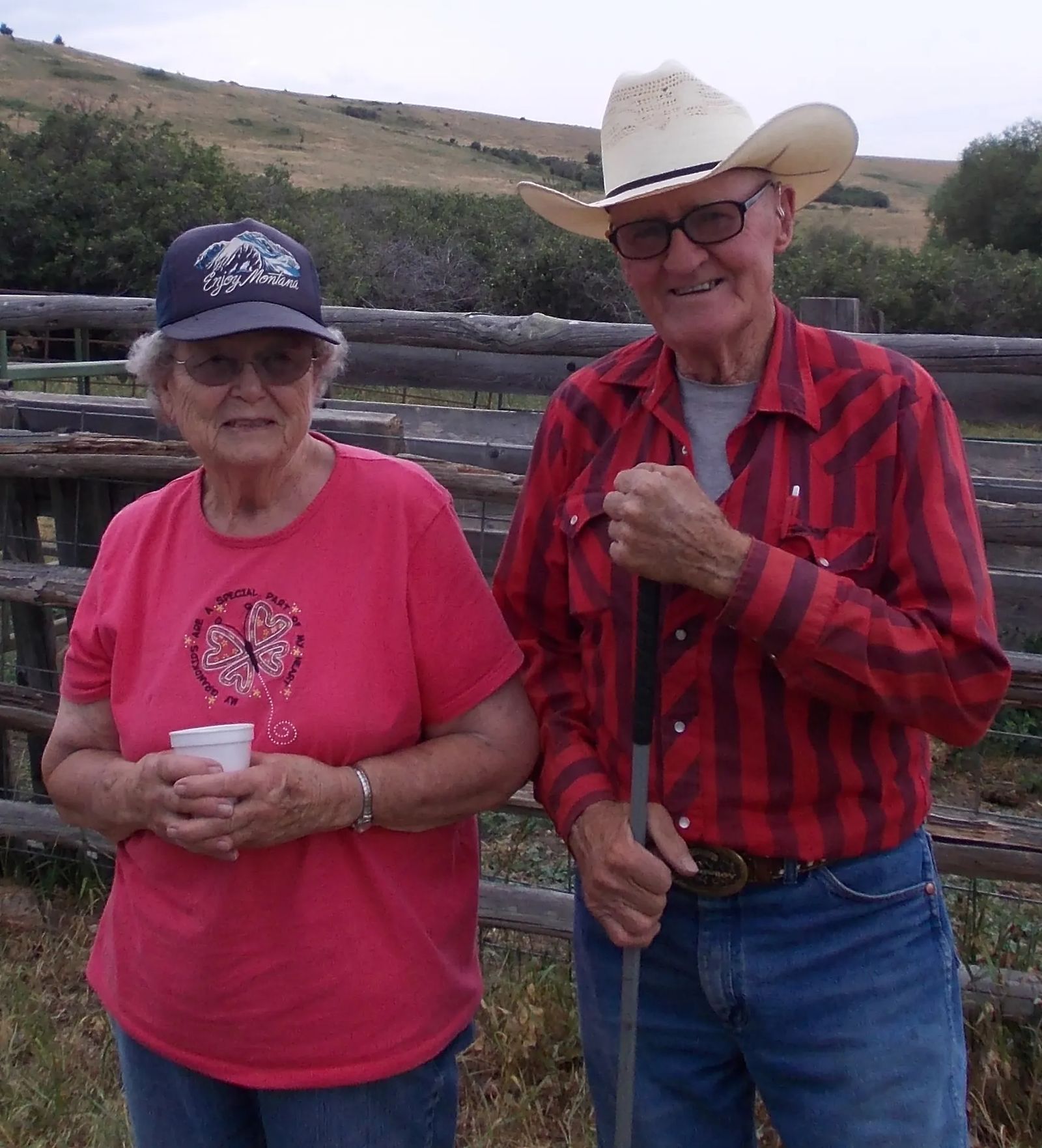 Henry was born in Big Timber, Montana on August 10, 1929 to Cecil and Eva (Bourne) Valgamore. His family lived northeast of Melville, Montana not far from his uncles’ and grandmother’s homestead. Henry attended Headley School until 1936 when the family moved to Glasston Flats. Henry then attended Glasston School through fourth grade. The traditional classroom wasn’t his favorite, but he received the best, most mischievous “education” roaming the hills with his brother, Dale, while fishing, hunting woodchucks, and swimming in Otter Creek. Henry was later put to work as a sheepherder for his uncle Coy Valgamore. He loved the outdoors and ranch life more than anything, so in 1941 when his folks decided to move to Big Timber, he thought it was the end of the world. Henry didn’t let it keep him from what he treasured, however. Every Friday after school he hopped on his bicycle and rode 13 miles from Big Timber to Glasston to spend the weekend at the ranch. He pedaled home on Sunday afternoon. When he was a senior in high school, Henry trained a horse for an endurance race, from Sheridan, Wyoming to Billings, Montana, by racing a classmate in her ’48 Ford up US Highway 191.

Lorraine, daughter of Andres and Martha (Seiferth) Laubach, was delivered by Dr. Claiborne in her family home on West Duck Creek north of Springdale, Montana at the base of the Crazy Mountains on May 9, 1934. She attended the Green School House up in the hills until her family moved to a ranch on the Yellowstone River where she attended Duck Creek School. Lorraine, her sisters, and her friends walked to school, and all of the rural families including the Laubachs took turns housing the teachers. Growing up, she helped her dad on the ranch leading plow teams, running the tractor, and tending to the livestock. The piglets were always her favorite.

Henry and Lorraine met at a community hall dance in 1950 and began dating during Lorraine’s junior year of high school. In April of 1951 Henry was drafted to serve in Korea. He spent 6 months on the front line and was later transferred to work as a Supply Sergeant in Japan all the while sending letters home to his sweetheart. Of the approximately 40 men in his company, 28 were severely injured or tragically killed. Henry earned a Purple Heart for his military service and was discharged. In March of 1953, he came home to Big Timber, ring in hand, and proposed to Lorraine. They married on August 9, 1953.

Henry worked for Burlington Northern Railway and Lorraine worked for the Montana Power Company, when the desire to get back to their roots led them to leave their Livingston, Montana home to work various ranch hand jobs. Along the way they were blessed with four girls, Debbie, twins Karen and Sharon, and Jamie. The doctor didn’t arrive in time for Jamie, so Henry delivered her at the Laubach home in Livingston. Later, Henry worked as a hired man at the Sheep Mountain Ranch for the Paul Ringling family, and Lorraine looked after the girls, gardened, and cooked for the hired men. The couple enjoyed dancing, playing cards, and attending dinner parties and picnics. Money was scarce, so in the summers Henry, Lorraine, and the girls picked and sold night crawlers for extra cash to get box seats at the Big Timber Rodeo. During the week, Henry and baby Jamie would also hunt jackrabbits to sell while Lorraine took the older girls to Bible School in Springdale.

In 1963, Henry went to work as a Core Driller for the Montana State Highway Department. He and Lorraine also leased land to run a few cows and begin building their own cattle herd. Henry worked for the State for 18 years. While he was away during the week, Lorraine cared for the girls, the livestock, and their home in Springdale. Before the days of fancy strollers, Lorraine, ever the innovator, would put her four little girls in a wheelbarrow to cart them around while she did chores and tended to their pigs, chickens, sheep, and cattle.

In 1989, Henry and his eleven-year-old grandson rode in the Montana Centennial cattle drive.

In 1991, after leasing different ranch properties for 14 years, Henry and Lorraine purchased a small ranch west of Big Timber along the Yellowstone River making Henry’s lifelong ranching dream complete. The couple named the place Rock House Ranch after the signature rock house built on the property in 1916. They leased additional mountain pasture and increased their cattle herd.

Lorraine has worn many hats throughout the years; gardener, butcher, 4-H leader, chef and dietician (always taking into consideration everyone’s special dietary needs and requests), hostess, and humanitarian, but perhaps her most valuable role is that of caregiver. After raising four daughters, she has also helped raise seven grandkids and eight great grandkids with compassion and comfort. She was able to help care for her daughter Debbie as she battled cancer. Lorraine fostered dozens of cute but stinky bum lambs, piglets, and calves, has shared family recipes and taught her daughters and granddaughters how to cook and can, and has initiated many relatives to the family-favorite card game, Nickels. She still harvests her garden every year and cans many homemade goodies. Lorraine is an active member of the First Congregational Church, donates regularly to organizations such as Intermountain Children’s Home, is a Hearts and Hands Hospice volunteer and a second-generation member of the Kill Kare Klub.

Henry has kept busy breaking his horses to work cattle, haying, managing weeds, roping, calving, branding, fencing, and showing his grandkids and great grandkids “the ropes” of a working ranch. His cattle know him so well that several come to his voice and will let him give them a good scratch. He won family push-up contests in his 60’s, was roping and riding in his 70’s and early 80’. Henry is a past board member for the Springdale School and the Crazy Mountain Stock Grower’s Association, a 48-year member of the American Legion and currently a board member for the Big Timber Yard and Scale.

Henry’s tenacity, passion, and commitment to his lifelong dream in partnership with Lorraine's loyalty, love, and good home-cooking allowed them to ranch and build a life together. Now 86 and 82, Henry and Lorraine have been married for 62 years, have loved and nurtured three generations, and are still ranching with the help of family.