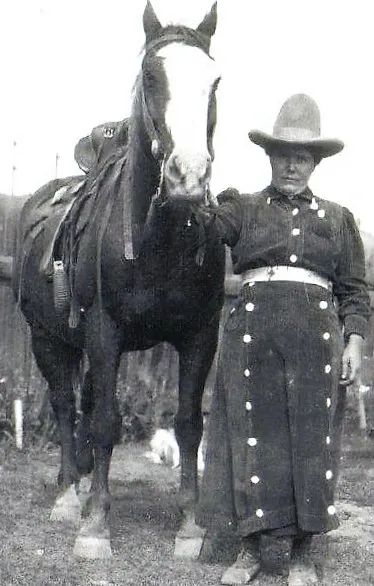 Ella was born in Missouri on September 30, 1880, to James Pembrook Daylong and Louisa Vashti (Hobbs) Daylong. Ella had two brothers, Millard and Perry. When Ella was but six years old, her mother died at the age of 35, leaving father "Jim" a widower, with three children to rear.

Jim remarried in 1888 to Melinda Jane Smith. They created eight more children, and by the time Ella was 16, her family had traveled to Douglas, Wyoming, where she met a young footloose cowboy named Bill Huntington, and was smitten.

The Daylong family continued to travel, and in 1897 or 1898, they camped for the winter south of Billings, Montana. As luck would have it, Bill Huntington was working in the vicinity, and when he heard the Daylong's were near, he hurried to re-acquaint himself with Ella.

By the spring of 1899, Ella and Bill were engaged. By the time they got married on July 30, 1899, they had a squatter's cabin and a set of corrals on Basin Creek south of Billings. Ella had her horse, "lndian", and a saddle. After buying grub, they had $1.35, and lots of love to pull them through. Bill had a job sawing wood for a brick yard and Ella worked right alongside.

Ella gave Bill his best birthday present ever when he turned 24-their first baby, a daughter, Daisy Emily, who was born June 27, 1900. A couple of years later, they bought some land in Billings and built a log home and barn. On April 18, 1904, Ella delivered a second child, a boy named William James, only to have her heart broken, when he took sick and died in August.

By 1907, the family was living on Blue Creek and Bill and Ella welcomed another baby girl into their lives on February 22. Since this date is also George Washington's birthday, they named her Georgia Vashti.

They donated land for a schoolhouse on Basin Creek, and Daisy was one of the first pupils-one of six. All was well until the fall of 1909 when Georgia contracted polio-the first case west of the Mississippi. Ella nursed her through, but Georgia was forever affected by it. The trials and heartbreaks of pioneer women.

Bill worked at many jobs, and was away from home a lot. Ella was a hardworking, resourceful woman who kept the home place running well in his absence. Georgia described her mother as having a zest for life, a good sense of humor, and said she was a good tracker and hunter. Ella was, in fact, a crack shot and always shot her birds and rabbits in the head, providing dinner. She raised a large, productive garden, which always had a few rows of flowers for beauty. She was an excellent cook having fully mastered Dutch ovens, and at times, cooked for crews of men.

Like most pioneer women, Ella was always busy, and even at rest, she was sewing or crocheting. She was a natural nurse, having a knack for healing both humans and animals, delivering babies, and doctoring wire-cut horses on a regular basis. She was a very talented and bold horsewoman. Georgia told of one time when Ella wanted to go to town, and Bill had all the broke teams elsewhere so she caught a bronc, harnessed it up next to the saddle horse, and got them hitched to a light wagon.

The bronc, Houlihan, was standing on its hind legs pawing the air. Ella jumped in the wagon, busted them out, and let them run circles on the flat until she thought she had control. She had little Daisy open the gate, and then climb up and stand on the gate post. Ella couldn't stop the team, so she went through the gate, circled back around, snatched Daisy off the gate post, and away they went to town.

Around 1910, Bill and Ella Huntington-together with Bill's sidekick George Williams and his wife Paris--started organizing and participating in Wild West shows. They started just around Billings, but soon branched out across the United States. Bill and George were bronc riders, Ella was a sharp shooter, and Paris was a trick rider and fancy roper. Bill and Ella's daughter Daisy, surrounded by this talent, learned to ride and trick rope, and performed for years alongside the adults. Georgia was confined to the sidelines as "an interested observer" and a later chronicler of her parents' lives.

To say that Ella was a sharpshooter, is no understatement. She would ride in the preview parades, decked out in a velvet riding habit, and carrying her .22 rifle. During the Wild West Shows, Bill worked with her, holding objects in his hands, which she would shoot. The grand finale was shooting an empty .22 cartridges off the top of Bill's head. Their only mishap occurred when Bill left his middle finger behind a paper target by mistake, and Ella clipped it, since the finger was behind the bull's eye! He just put his injured finger in his pocket..."The show must go on!"

Ella made all their show clothes herself, hauling her treasured treadle sewing machine with them.

After a few years, they gave up the traveling and returned to ranch in the Bull Mountains north of Billings, at a place called Pickett Springs. No matter what endeavor Bill tried, Ella was his right hand man....and remember, women wore long skirts then. If Bill straddled a bronc she pulled the blind. If he heeled a calf, she manned the branding iron. If the fence needed fixing or built, she wielded a hammer. She never complained, and when going off on a job with her husband, always was so joyful, you would have thought she was headed for a picnic.

Ella and Bill moved to Indian Creek east of Billings, in 1924, and ranched there until she died in June of 1948. She was a remarkable woman and true partner. Her sister-in-law, Pearl, summed it up on her sympathy card, writing "Ellie surely was a good woman, if ever there was one."

They Were Good Men and Salty Cusses, by Bill Huntington, 1999

lBoth Feet in the Stirrups, by Bill Huntington, 1999