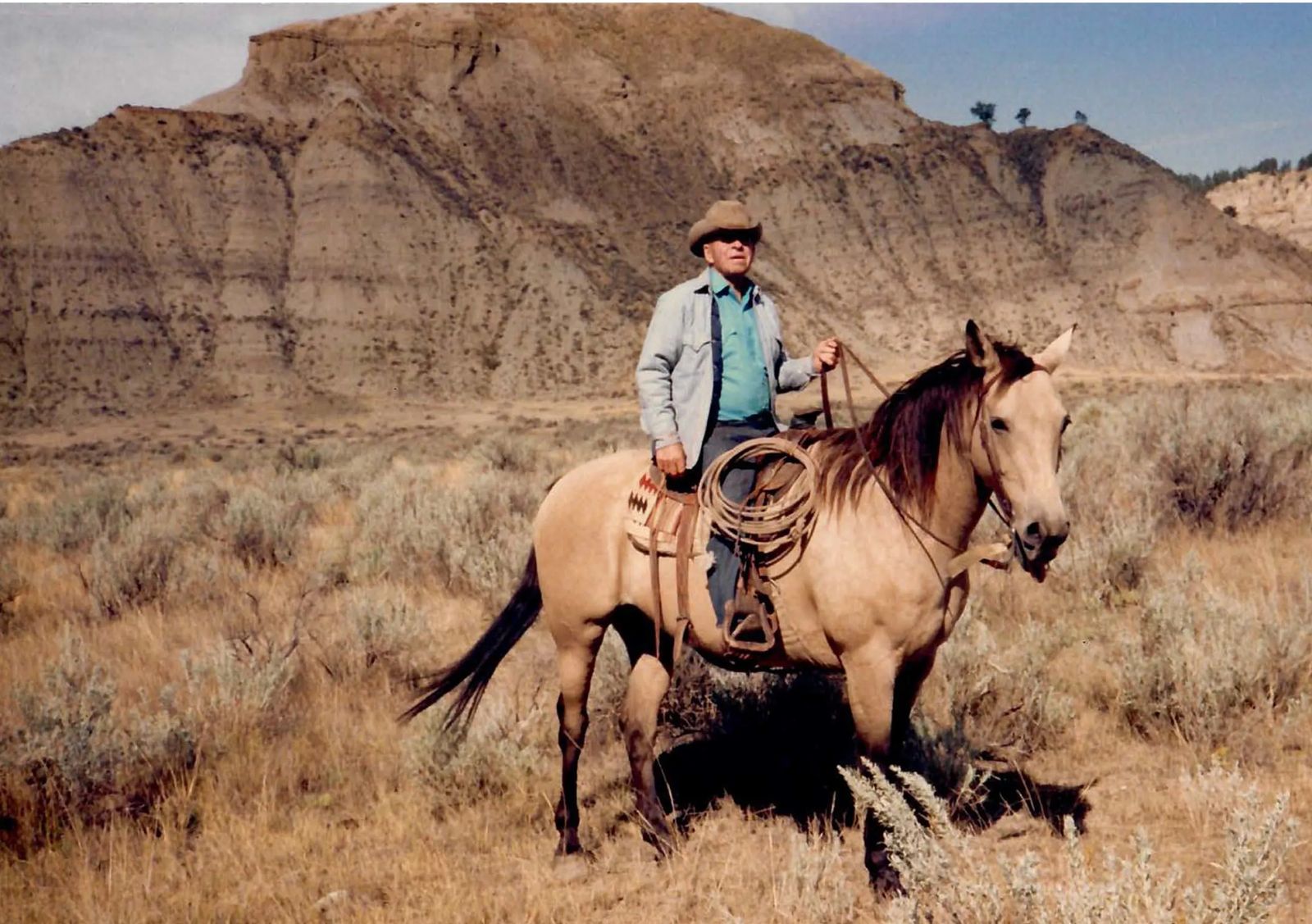 George R. Smith, known as “Sonny” all his life, was born in 1915 in Gilt Edge, Montana. For the next 96 years, he was a cowboy through and through. Sonny was raised and educated in the booming mining town of Gilt Edge, located in Fergus County. He went to high school in Lewistown, Montana and soon after, the life of cowboying called to him.

Sonny, along with some other prominent Fergus County cowboys, including his best friend Jimmy Karo, all headed for Glacier National Park and worked for the Park Saddle Horse Company. The only real way to see the Park in the 1930s was by horse and pack string. The trips to see the Park took over two weeks, and Sonny was one of the few wranglers that guided them. On one particular trip, Sonny was the guide for the Rockefeller family. He was content to have this job doing what he loved, as there were not a lot of jobs available at that time in Montana’s history. Sonny also took a job taking care of horses on box cars as they were transported via railroad. He would even ride the train to Chicago looking after these horses, but could not wait to get back home to Montana.

In 1941, Sonny married Annie Komarek of Roy, Montana. The two were married for sixty-seven years and spent all of that time ranching, raising a family, and always being around horses. They had ranches in Fort McGuiness, Grass Range, Augusta and Chinook, Montana. It was in Grass Range that they called home the longest and that is where Sonny remained for the rest of his life. Sonny and Annie had three children, Caren, who is now deceased, Barry, currently living in Gilt Edge, and Mike in Shawmut.

Sonny appreciated and respected everything involving a horse, from breeding, breaking, showing, racing, and cattle work to roping. Sonny bred many of his own horses and had one of the first Hancock sires to grace Montana soil.

Rodeo was also a big part of Sonny’s life. Both he and Annie competed in rodeos all over Montana, many places not heard of today such as Beckett, Blind Breed Gulch and Slonger’s Grove. Sonny served as President and Vice President of the Northern Montana Rodeo Association (now the NRA) and competed in team tying and team roping winning several year-end awards as a heeler.

In later years, buying, selling, and trading old cowboy gear was a passion of Sonny’s. He knew quality and was the “go-to” guy for old collectible saddles, bridles, bits and spurs. Many of his collections reside in museums across Montana, including a very rare Robbins-Lenoir Saddle in the Miles City Saddlery Museum. Only one of two in existence, this saddle is a front runner to the Cogshell. Sonny was one of the original trustees of the Montana Cowboy Hall of Fame and Western Heritage Center serving District 6. At seventy-nine years old, Sonny was still “dragging calves to the fire.” He continued to ride until a hip replacement slowed him down at the age of 87.

Annie passed away in 2008. Sonny passed away at the age of 96 in 2012. Those who were familiar with Sonny Smith knew that a true cowboy had ridden over the Great Divide. Sonny and Annie are buried side by side in the Lewistown Cavalry Cemetery.